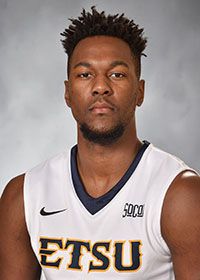 About Tevin:  Tevin has played for head coach Steve Forbes both at Northwest Florida State and Wichita State. 2015-16: Sat out the season for NCAA transfer rules.  Prior to ETSU: Averaging 12 points, 5.8 rebounds and 1.5 assists during his final season in junior college, Glass went on to play in 19 games for the Shockers a year ago, averaging 2.1 points and 1.1 rebounds per game... During his prep years at Milton High School in Alpharetta, Ga., Glass averaged 15 points and 11 rebounds on a team that won the 2012 Georgia 5A state title during his senior year. Personal: Major is Interdisciplinary Studies ... son of Linda and Chuck Glass ... born May 7, 1994.