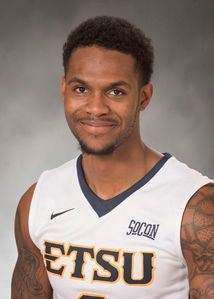 About Jermaine: A shifty and elusive player off the dribble, possessing the ability to score at all three levels … very difficult to defend … a very good passer and willing defender that gives the Bucs added size and length on the perimeter. 2016-17: Had a team high six assists to go with five points and five rebounds in the Bucs’ loss to Florida (3/16) in the first round of the NCAA Tournament … provided very productive minutes at the SoCon Tournament, including an important made 3-pointer to tie the game midway through the second half in the final victory over UNCG (3/6) ... made his first career start in replacement of a sick Desonta Bradford in the win at Western Carolina (2/25), posting season highs for minutes played (29) and blocks (2), while scoring eight points, dishing out three assists and swiping two steals ... for the second time in three games, he matched his career high with five assists in the win over Furman (2/22) ... matched his career high with five asssits and scored five points in the win over Samford (2/15) ... totaled a career high five steals in 20 minutes vs. The Citadel (2/9) ... Dished out four assists in the double OT win at Samford (1/25) ... had a strong game in the win over Western Carolina (1/14), posting career highs for free throws (6) and steals (3), while scoring eight points and grabbing four rebounds ... played his best game so far as a Buc, netting career highs for points (11), field goals (4), rebounds (5), steals (2) and minutes played (20) in the win over The Citadel (1/5) ... enjoyed a strong  game by posting then career highs for points (9), field goals (2), free throws (5) and steals (2) in the win over VMI (12/31) ... collected season highs for free throws made (4), free throws attempted (4) and minutes played in the win over Lees-McRae (12/1) ... posted a career high three assists in the win over UC Irvine (11/27) ... had his best game as a Buc, scoring five points, grabbing five rebounds and dishing out two assists in the win over South Dakota State (11/26) ... posted a season high for steals with two, while dishing out an assist and scoring two points in the win over Milwaukee (11/25) ... played eight minutes in his debut with the Buccaneers in a win over Fordham (11/11). Prior to ETSU: Ranked 21st in the country in scoring last season, averaging 20.6 points and 4.7 rebounds a contest, while also dishing out 96 assists on the year at Allen County Community College … a second team All-Jayhawk Conference selection and honorable mention all-region, Long made 73 3-pointers and shot 80.7 percent from the foul line (196-243) on the season. His free throw numbers ranked sixth in the country for makes and seventh nationally for attempts. … last season, Long scored a career high 41 points in a win over conference foe Coffeyville, making a school record 10 3-pointers in that contest. In addition, he posted a 30-point effort in a win over Cowley County, going 15-of-18 from the free throw line in that game. Personal: Major is Physical Therapy … son of Gezelle Long and Wayne Williams … born Oct. 30, 1996.