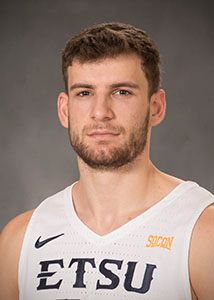 About Mladen: Brings great size and strength to the Bucs’ roster, along with a strong desire to work hard … his international experience combined with his year at prep school prepared him well for the college level … will provide more depth and length to the Bucs’ inside game. 2017-18: Was named to the All-SoCon Freshman Team by the league’s coaches ... matched career highs for minutes played (29) and steals (2), while scoring eight points in the loss to UNCG (3/5) in the SoCon Finals ... had his first career double-double with 12 rebounds and 10 points in the win over Furman (3/4) in the SoCon Tournament semifinals ... collected a career high three assists in the loss to Wofford (2/23) ... equaled his previous career high with 14 points and six field goals in the loss to The Citadel (2/20) ... matched his career high with 10 rebounds in the win over Western Carolina (2/17) ... for the third time this season, matched his career high for rebounds with 10 in the win over VMI (2/10) ... matched his career high with 10 rebounds in the win over The Citadel (1/29) ... scored 11 points, grabbed five rebounds and swiped two steals in an all-around strong performance against Wofford (1/27) ... had seven points and eight rebounds in the win over Mercer (1/24) ... showed toughness and skill with 13 points and six rebounds in the win over UNCG (1/11) ... had one of his best games offensively this season, scoring a career high 14 points and grabbing five rebounds in the win over Chattanooga (1/6), despite playing just nine minutes ... set or matched career highs for points (10), field goals (4), and blocks (3), while grabbing nine rebounds in an all-around strong effort against Tusculum (12/28) ... enjoyed a nice effort in the win over Detroit Mercy (12/19), scoring seven points and grabbing nine rebounds in the win ... set or matched career highs for points (10), field goals (4), assists (1) and steals (1) in the win over Hiwassee (12/10) ... had nine rebounds and scoerd five points in the loss to Kentucky (11/17) ... made his first career start in the win over Savannah State (11/13), but foul trouble limited his minutes ... enjoyed a strong debut for the Bucs, posting a team high 10 rebounds while scoring seven points in 25 minutes of action against Northern Kentucky (11/10). Prior to ETSU: Played for head coach Charles Baker at Southwest Christian Academy in Little Rock, Ark., where he averaged 16.3 points and 12.8 rebounds, while shooting 60 percent from the field and 73 percent at the free throw line … he led Southwest Christian Academy to a 36-3 record en route to claiming the NACA National Championship … earned NACA first team All-American honors and was also named MVP of the NACA National Tournament … during his time in Serbia, he played for the KK Paritzan Junior Team … in 2014, Armus helped guide Serbia to a Bronze medal in the U17 World Championship in Dubai, while he has been invited to play in the U20 European Championship this summer … had scholarship offers from South Florida, St. Bonaventure, Fresno State, Washington and Washington State. Personal: Major is Computing … son of Vladan and Dragana Armus … born March 26, 1997.