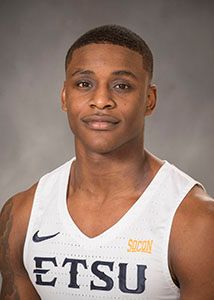 A multi-sport standout in high school who excelled in basketball, football and track and field … can score from behind the arc and at the rim … strong dribbling skills and can distribute the ball well … great physical attributes and exceptional overall athleticism.

Earned third team all-SoCon honors via the coaches and media … Tabbed MVP of the Sun Bowl after averaging  12.5 points, 5.5 rebounds and 3.5 assists, while shooting 67 percent from the field (10-15) in wins over Wyoming and Norfolk State … Played in 29 games (27 starts), while missing four games in  November due to injury … Scored in double figures 15 times … Posted his first collegiate double-double after finishing with a career-high 26 points and 12 rebounds on Feb. 21 … Also held Bubba Parham – the league’s leading scorer  - to zero field goals and two points … Ended the regular season with a 20-point, 7-rebound, 4-assist, 3-block  and 2-steal performance in the win over Western Carolina on March 2 … Was instrumental in the Bucs’ win over The Citadel on Feb. 14 as he finished with 18 points, eight rebounds and a career-high six assists, while going 8-of-12 from the field and 2-of-3 three from beyond the arc.

Prior to ETSU: The back-to-back 2016 and 2017 Class AA Mr. Basketball in the state of Tennessee out of Maplewood High School, Bo was the first signee in ETSU’s 2017-18 recruiting class … a first-team all-district, all-region and all-state selection during both his senior and junior campaigns, he averaged 26.3 points, 14.2 rebounds, 4.3 steals, 3.0 blocks and 7.3 assists per game his senior season for head coach Ty Wilson … he led his high school team to a 2017 state championship and was named the TSSAA State Tournament MVP ... he finished his high school career with over 2,000 points, 1,800 rebounds, 300 blocked shots, 500 steals and 700 assists ... played AAU basketball for the Tennessee Legends and was coached by his father Bo Hodges, Sr.