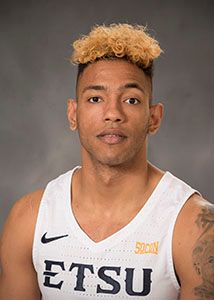 Signed with the Bucs as one of the top junior college players in the country and one of the top two or three at his position … a highly-skilled offensively player who provides a strong presence on the glass … has an exceptional motor and will provide toughness inside.

Earned first team all-SoCon honors by the media and second team honors by the coaches ... Landed a spot on the National Association of Basketball Coaches (NABC) Division I All-District Team ... Ranked eighth among NCAA Division I players in rebounds per game (10.9), 12th in total rebounds (361), 13th in offensive rebounds per game (3.42), 18th in defensive rebounds per game (7.52) and 23rd in double-doulbes (15) ...  Totaled 15 double-doubles, while averaging 11.2 points and 10.9 rebounds in 33 games for the Bucs ... Shot 56 percent (152-274) from the field and also totaled 64 assists, 44 steals and 21 blocks for the Blue and Gold ... Set a new single-season program record for offensive rebounds as his 113 boards surpassed Zakee Wadood’s mark of 108 (2001-02), while his 361 total rebounds were tied for the sixth-most in Buccaneer history with Tommy Woods (1965-66) ... Earned a pair of SoCon Player of the Week honors, while scoring in double figures 20 times and tallied 19 double-digit rebound games ... Scored a career-high 21 points twice (vs. UT Martin and at Furman), while he pulled down a career-high 19 rebounds in the win over Samford on Jan. 3 inside Freedom Hall.

Missed the season following a medical procedure on his right shoulder.

Came to ETSU from Northwest Florida State College, where he averaged 14.7 points and 9.7 rebounds per game, while shooting 60 percent from the field for a team that ranked No. 3 in the country and finished the year with a 29-5 record … was named the Panhandle Conference Player of the Year and is currently ranked as the 16th best junior college player in the country by JucoRecruiting.com … helped lead his team to a Panhandle Conference title and a fourth place finish in the NJCAA National Tournament … following his high school basketball career at Pope John XXIII Regional High School in New Jersey, he arrived at Northwest Florida and was a first-team All-Panhandle, first-team All-Region and NJCAA All-Tournament selection this past season … he recorded 15 double-doubles on the year and collecting 23 points and 13 rebounds in a matchup with eventual national champion Hutchinson at the NJCAA Final Four.