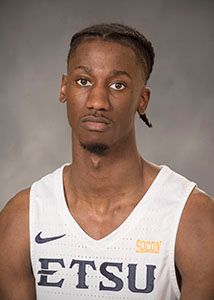 About D’Andre: A big-time athlete who has tremendous skill for a player his size … can stretch the defense at the 3-point line and he can finish at the basket … his length and athleticism are very disruptive on the defensive side of the ball. Prior to ETSU: Was considered a Top 10 recruit out of Canada following his prep career in 2015 and spent a redshirt season at North Florida in 2015-16 before transferring to Georgia Highlands College for the 2016-17 and 2017-18 seasons … in 2016-17 at Georgia Highlands, Bernard averaged 5.6 points and 4.6 rebounds a game on a team that went 32-2 on its way to a Region 17 championship and a trip to the NJCAA National Tournament in Hutchinson, Kan. … as a prep standout at Bill Crothers Secondary School in Canada, he averaged 14.6 points, 8.8 rebounds, 3.1 assists and 2.1 blocks per game as a senior. Personal: Majoring in Communications ... son of Chellephe Gayle and Nicholas Snagg ... born Dec. 23, 1996.