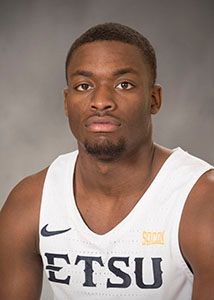 About Carlos: A dynamic offensive player who can really score the ball … has the versatility to score at the 3-point line and at the rim … a tough, competitive player who really cares about winning. Prior to ETSU: As a senior at Riverside University High School, he was a three-star recruit who is beginning his senior season after averaging 19.0 points and 6.4 assists as a junior. The 2016-17 Milwaukee City Conference first-team, all-league selection is a nominee for 2018 Mr. Basketball in the state of Wisconsin and the preseason player of the year in his league. Personal: Majoring in Communications ... son of Clifford and Setric Curtis ... born Sept. 17, 1999.