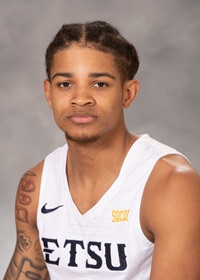 A tremendous offensive player who is not only a prolific 3-point shooter, but can also score off the bounce in a variety of ways … has very good size to create his own shot and his length will help him become a very good defender.

Named to the SoCon All-Tournament Team … Played in 34 games (eight starts) … Led the team in scoring (12.2) and points scored (414) … Scored in double figures 24 times, including career-high 24-point efforts against Norfolk State (12/22) and Western Carolina (3/2) … Scored 20+ points seven times … Made 82 three-pointers, which ranks eighth in single-season program history … Finished with 20 points on 9-of-18 shooting at Creighton … averaged 17.0 points and shot 52 percent from the field (14-27) in the SoCon Tournament … Made six three-pointers, while adding four rebounds, four assists, four steals and two blocks in the two tournament games …  Began the tournament with a 21-point effort (9-of-15 shooting) in the quarterfinal win over Chattanooga and then added 13 points, three assists, three steals and two rebounds against Wofford in the semifinals.

Ranked as the 35th best junior college player in the country after averaging 14.8 points per game this past season at Northwest Florida State College … helped lead his team to a 31-3 record … for the season, Boyd shot 45 percent from 3-point range and 78 percent at the foul line, making 106 3-pointers on the year, which ranked 11th nationally … after his prep career at Olive Branch High School in Memphis, Boyd was an All-Panhandle and All-Region selection in junior college, as his NFSC team captured both the Panhandle and Region 8 championships on its way to an Elite Eight appearance in the NJCAA National Tournament.