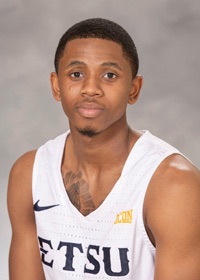 A talented guard with the ability to score the basketball … a versatile player who can make shots from outside and at the rim … came from a successful high school program … will have four seasons of eligibility after joining the Bucs following his prep career.

As an Associated Press first-team all-state selection his senior year, he helped power his Winston-Salem Preparatory Academy squad to the North Carolina state championship and was named the tournament MVP … earned conference player of the year twice and was named recipient of the Frank Spencer Award … averaged 23.1 points, 5.4 rebounds, 2.5 steals and 2.6 assists per game as a senior.