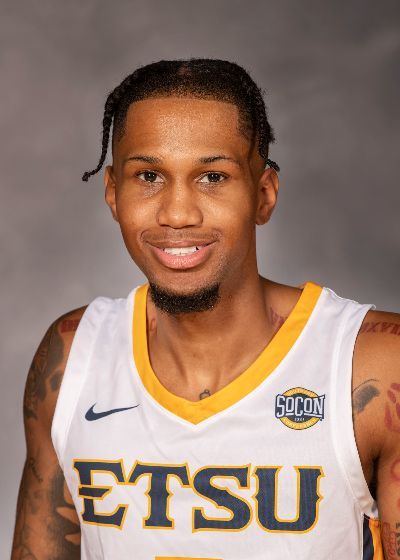 Transferred to ETSU after playing at Lees-McRae the past two seasons ... In his two seasons with Lees-McRae, Hairston averaged 12.9 points, 2.0 rebounds and 1.2 assists per game ... The Salisbury, N.C. native only played in 20 games during his time in Banner Elk as the Bobcats played 12 games during the COVID 2020-21 season and Hairston played in eight games last year before suffering a season-ending injury ... In 2020-21, Hairston led the Bobcats in scoring at 14.3 points per game, while posting 10.8 points per game before getting injured last year ... Last year, Hairston scored 21 points on 6-of-12 shooting (6-8 at free throw line) against Carson-Newman in the season opener ... In January, Hairston netted 20 points on 6-of-11 shooting against Belmont Abbey ... Hairston shot 43 percent from the field, 36 percent from beyond the arc and just under 80 percent at the free throw line during his two seasons with Lees-McRae. In his first season, Hairston scored in double figures in nine of the 12 games, including three 20-plus scoring efforts ... Hairston’s career high at Lees-McRae came against King when he totaled 23 points on Feb. 18, 2021 ... Following the 2020-21 season, Hairston earned third team all-conference honors ... Graduated from Lees-McRae with a business degree, while he also garnered Conference Carolinas Presidential Honor Roll honors ... Played at Carson High School where he scored 1,659 career points, ranking second all-time ... During his senior season, Hairston was named co-player of the year for Rowan County and MVP of the Sam Moir Christmas Classic.

Following a stellar high school career, Hairston signed with Lander University before transferring to Davidson County Community College ... In his one season at DCCC, Hairston averaged over 20 points per game en route to leading the Storm to a 31-1 record ... Hairston shot 40 percent from long distance and 80 percent at the free throw line at DCCC.