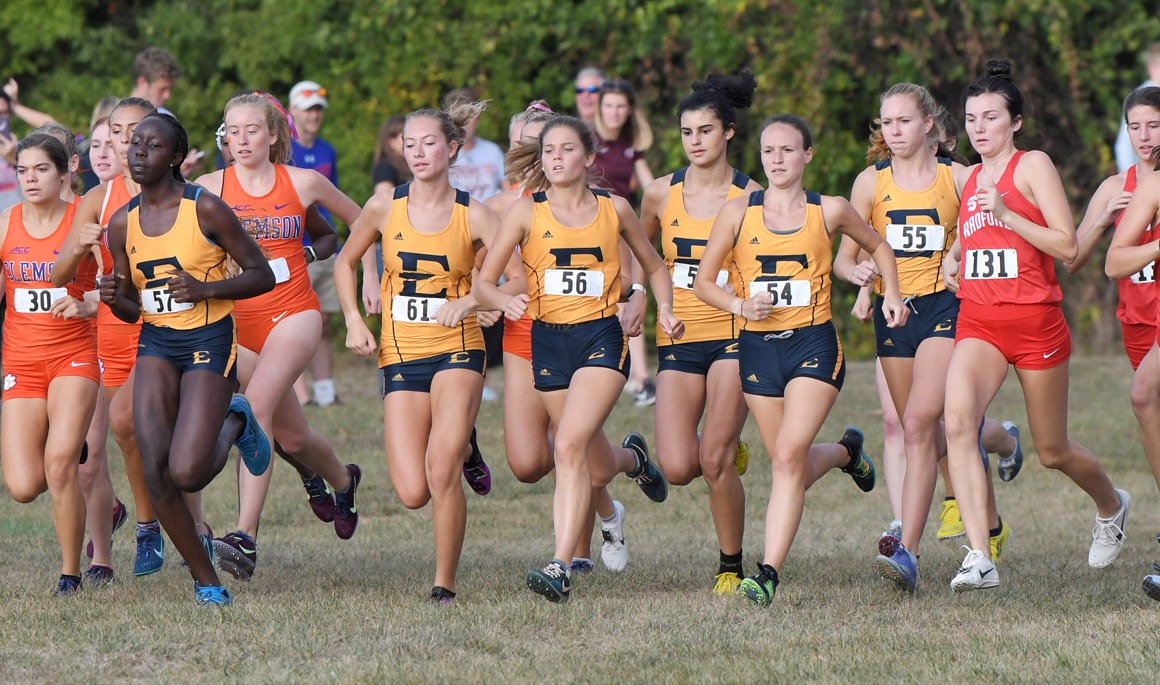 The women, who were led by sophomore Genevieve Schwarz (Oak Ridge, Tenn.), totaled 104 points to win the second of three women’s races at Saturday’s event. Overall, the Buccaneers won by nine points over St. Francis (Ill.) and 14 over Taylor, while St. Bonaventure was the next highest Division I team with 329 points. Overall, 62 teams made up the field for the blue race.

Schwarz finished ninth overall in the 533-runner field with a time of 18:27.6 in the 5K run, marking a collegiate best. Saturday’s mark was 13 seconds better than her personal best, which was set at last year’s season-opener in Boone, N.C.

Tusculum’s Nicole McMillen won the blue race with at time of 17:43.6.

Shila Kapaya (Knoxville, Tenn.), the reigning Southern Conference Freshman of the Year, finished in 14th at 18:35.1, while Makayla Shaw (Jonesborough, Tenn.) placed 16th and  Heather Feuchtenberger (Elizabethton, Tenn.) came in 28th. Shaw crossed the line in 18:38.2, Feuchtenberger clocked in at 18:57.7 and Lindsay Holliday (Maryville, Tenn.) capped off the Buccaneer scoring in 37th place. Kapaya, Shaw and Feuchtenberger all set new collegiate bests with Shaw making the biggest dent by cutting 30 seconds off her previous mark set at the 2017 Upstate Invitational.

“We entered the women into the "Blue" race to give them a chance to run near the front of the field,”  said head coach George Watts. “They responded beautifully by earning a hard-fought victory – coming from behind over the last 1000m to overtake three teams.  We had several personal bests and a huge improvement from our last meet.”

On the men’s side, Malick Gemechu (Johnson City, Tenn.) led the Blue and Gold to a fifth-place finish. Gemechu paced ETSU for the second time the season by placing 18th with a mark of 24:08.7 on the 8K course.

As a team, the Bucs totaled 213 points en route to finishing ahead of five regionally-ranked teams. MTSU, who is ranked No. 22 nationally, won the gold race with 81 points, while host Louisville finished runner-up with 111 points. Campbell (147 points) and Lipscomb (211 points) capped off the top-five.

Gemechu, Bradtmueller and Charles all registered personal collegiate bests on Saturday. Gemechu nearly took off 30 seconds from his best which came last year on the same course, Charles’ mark was almost 40 seconds faster from last season’s Louisville Classic and Bradtmueller clocked in nearly 50 seconds quicker than his mark set at the 2016 SoCon Championships.

Overall, eight of the 10 Bucs who ran on Saturday set personal bests.

“I have mixed emotions about the men’s race,” said Watts. “We had some very solid performances and also some sub-par results -- and they know who they are. The big positives are one that eight of the 10 men ran personal bests. Secondly, I see a team that has a chance to be very good.  When they piece it together on the same day they could surprise some people.”

The Bucs will return to action the weekend of Oct. 18-19 as the Blue and Gold are scheduled to run in the BertCross Invite on Friday, Oct. 18 and the men are heading to Terre Haute, Ind. for the NCAA Pre-Nationals on Saturday, Oct. 19.