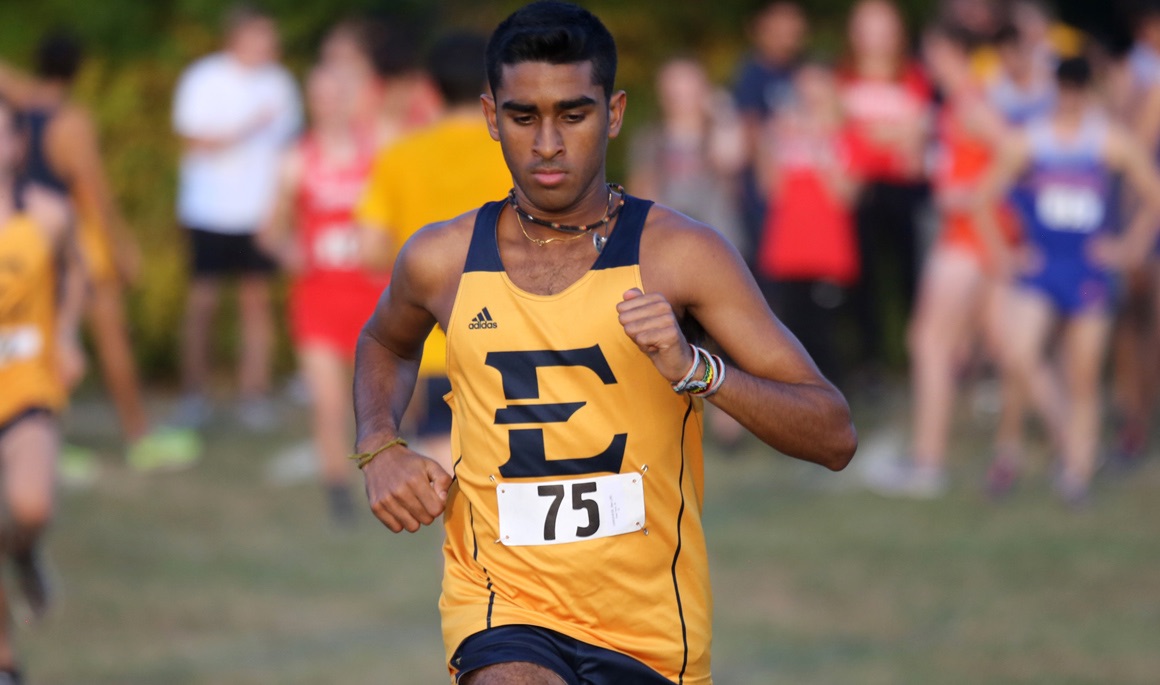 As ETSU junior Ben Varghese (Kingsport, Tenn.) gears up for his second straight trip to the NCAA Cross Country Championships this weekend, the Buccaneer runner looks to learn from last year's appearance to help turn in a strong performance on Saturday.

Varghese, who was the first ETSU runner to compete at the NCAA Championships since head coach George Watts took over the program in 2012, finished 177th with a time of 31:20.2 last year on a chilly, icy course in Madison, Wisconsin.

The Kingsport, Tenn. native may have been a little too excited and put too much pressure on himself last year, which may have affected his performance.

“I am just going to keep it simple and run my race,” said Varghese, who has 12 top-five career finishes. “You don’t want overthink it. I think that caused me not to have the best race last year. I was also too excited and was like a deer in headlights. This year I am more relaxed and coming off one of my strongest mental races of my career.”

“Ben is clearly more prepared for this year's NCAA Championship having gone last year,” said Watts. “We talked about that possibility after last years’ race and it will pay off at some level.

“We talk about having our best races at the end of season, especially in cross country.  Ben has done that this season.  He's accomplished quite a bit in his three years and Saturday is the icing on the cake.  He's certainly earned the opportunity and we are proud of him and know he will represent himself, the program and ETSU in a first-class fashion.”

Last weekend, Varghese finished fifth at the NCAA South Regional in Tallahassee, Fla., to secure one of the automatic spots into the NCAA Championships. Varghese clocked in at 30:12.5 on the 10K course from the Apalachee Regional Park.

“At last year's regional meet, I had to go to the well – racing with the Alabama runner – and it made me more tired,” said Varghese. “This year I stayed in 20th and started picking off people, so I feel my body is more refreshed and I think that will have a positive factor coming into this weekend’s race.”

Now, a week later, Varghese will be gearing up for another challenging 10K run, but his mindset and recovery this time around hope to bring stronger results come Saturday.

“Whenever you have back-to-back 10Ks with only seven days to recover, it’s a challenging process,” Varghese said. “For me, I have chilled out and made sure recovery has been a top priority. I have been doing all the little things. I’ve been relaxing, enjoying life and staying happy. You have to do all the little things to get to where you want to go, but I am not going to overthink it this time around.”

This time around, Varghese joins the Buccaneer record book as he becomes the first ETSU runner to make back-to-back appearances at the NCAA Cross Country Championships since Seamus Power raced in three straight from 1991-93.

“It’s pretty cool to have my name up in the ranks with them. Seamus Power, Ray Flynn, Mark Finucane, Dennis Stark... just to name a few. It’s really cool,” said Varghese. “I am doing this race for me. This is what I want to do. I wanted to accomplish this as a runner. I am not putting any pressure that I have to live up to, because that’ll cause more issues. We have such a rich history in our sport at ETSU and to know about all of that, but I am not going to overthink this race.”

One of the biggest differences this weekend is Varghese will be without his teammates as he’s the sole representative in the Blue and Gold on Saturday. Despite not having his teammates running with him, Varghese knows they will be there in spirit.

“I know the guys are extremely happy for me and they’re excited,” said Varghese. “It’s a little different not having them there and having to run by myself. I know the team wants to be there but they’ll be there in spirit.”

Saturday’s race will be held at the LaVern Gibson Championship Cross Country Course in Terre Haute, Ind., the same course Varghese and his teammates raced on last month at the NCAA Pre-Nationals. Even though the results were not in the Bucs’ favor that day, Varghese knows running the course will help play a factor this time around.

“It always helps (to know the course),” added Varghese. “When we raced at pre-nationals, we didn’t have the results we were looking for but I think it was good exposure – not only for me but the team – and just getting familiar with the course because it is challenging. Hopefully it doesn’t snow like last year, because in Wisconsin I was slipping around and wasn’t ready for it. This year I am more familiar and have a better idea of what I need to do.”

The pre-nationals came two meets after Varghese’s first collegiate win at Virginia Tech, but the Buccaneer runner couldn’t capitalize off that run in Blacksburg. It was an up-and-down season for Varghese, but he has learned from his mistakes and hopes to turn in a strong result in the season finale.

“One of biggest issues I had in the middle of the season was I didn’t have my head in the right place,” said Varghese. “I was all over the place and overthinking every race. I was putting too much pressure on myself and it ended up burning me out a little bit. But having this competition is great. I’ll see some old friends that I have raced against in high school, and again, it’s just another race. I am happy I can go out and race with these guys and elevate my performance when I am out there.”

Not only has Varghese had the support from his team, but being a local product, the community has shown their support.

“The community is great,” said Varghese. “I’ve always had the support since I have been younger. I am so thankful for this community and their support. I am thankful for Coach Watts. He has helped and supported me along  the way. He has done everything in his power to provide me with the support I need to get to where I am, as well as with my family and friends. The love from people is amazing. It’s awesome!”

Varghese will have the support from the community and the Buccaneer faithful the entire time in Terre Haute.

Varghese and the other 371 runners in the field will hit the course on Saturday afternoon at 12:15 p.m. The race will be video streamed live on Flotrack, while live results will also be provided via PTTiming.