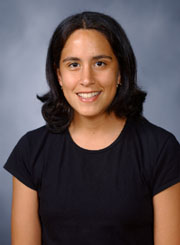 2003 Cross Country: Walked on to cross country team in the fall ... participated in her first meet at Southern Conference and finished 60th.