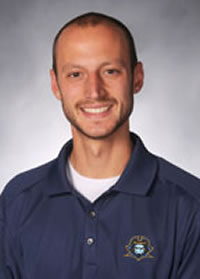 The Mercer, Pa. native was a student-athlete at Grove City College and received his Bachelor's in Communication Arts and Sciences in the spring of 2008. While competing at Grove City, Leuenberger claimed the school record in the 5000m and was the 2007 Presidents Champion in both the 1500m and 5000m events. In addition, the decorated track and field athlete was named Grove City College Track and Field Team Most Valuable Player and First Team All-Conference.

Off the track at Grove City, Leuenberger helped plan a trip with other members of the track and field team to Biloxi, Miss., to assist with construction efforts following Hurricane Katrina. Meanwhile, Leuenberger also dipped into the coaching ranks in 2007 and 2008, as he took over the reigns at a collegiate cross country club and an elementary school running squad. Most recently, Leuenberger spent time training and working with several high school and post-collegiate athletes in the spring of 2008.

Prior to his stint at Grove City, Leuenberger spent one season competing at Calvin College - where helped guide the men's cross country squad to the 2004 NCAA Division III National Championship.

Leuenberger resides in Johnson City, Tenn. with his wife Brittany Leuenberger, who is also a graduate and fellow track athlete from Grove City College.