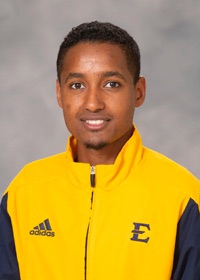 2019 Cross Country: Named to the SoCon Honor Roll ... Ran in seven meets for the Blue & Gold ... Led the Bucs in the season-opener where he finished sixth at the Covered Bridge Open -- his best collegiate finish ... Also paced ETSU at the Louisville Classic where he turned in his best collegiate 8K time at 24:08 en route to an 18th place showing ... Also placed 18th at the SoCon Championship and at the Virginia Tech Alumni Invitational.

2018 Cross Country: Named to the SoCon Honor Roll ... Ran in five meets for the Bucs ... Placed 16th at the SoCon Championship, while finishing 32nd at the NCAA Regional meet with a mark of 32:28 on the 10K course ... Posted his best collegiate finish a the High Point Vertcross where he placed fourth in 25:02.

2017 Cross Country: Earned a spot on the SoCon Honor Roll ... Named to the SoCon All-Freshman Team ... Ran in four meets during his rookie season ... Turned in his best time of the season at the Virginia Tech Alumni Meet where he clocked in at 25:38 on the 8K course ... Finished 23rd at the meet in Blacksburg ... Placed 26th at the SoCon Championship with a mark of 26:04.

Prior to ETSU: Ran Cross Country and Track & Field at Science Hill High School ... Was an all-state and all-conference distance runner for the Hilltopperrs.