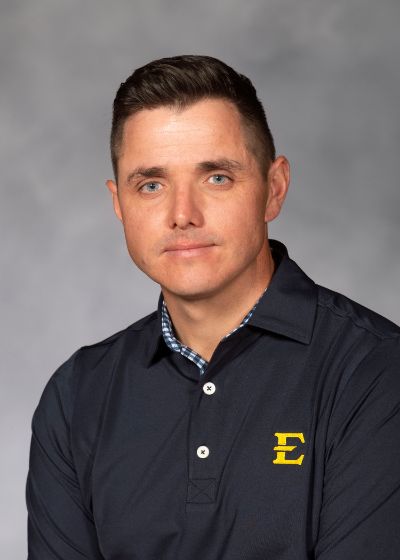 Jake Amos is now in his fourth season at ETSU and his third as the Head Coach for the Bucs. During Amos’ first year at ETSU he served as Associate Head Coach during the 2018-19 season.

Coach Amos’ first year as the head coach was cut short due to the worldwide COVID-19 pandemic. However, his squad did not miss a beat during his second year at the helm of the program. ETSU went on to win its 21st Southern Conference Championship and 26th conference title in ETSU history. The Bucs held off Western Carolina for an 8-stroke victory, their first SoCon title since 2017. ETSU was led by Archie Davies who won the SoCon Individual Medalist honors, his first collegiate victory.

Fast forward one month later, the Bucs made history after winning the Cle Elum Regional in Washington, their first NCAA Regional title since 2001. ETSU dominated the field of play, finishing 14-under-par as a unit, 10 strokes ahead of San Francisco (-4). The victory secured ETSU its first trip to the NCAA Championships since 2008. Former Buccaneer Shiso Go captured the podium with an 8-under-par tournament, becoming the first Buccaneer to claim medalist honors at the NCAA Regionals since Rhys Enoch (2010).

Amos’ 2020-21 Buccaneers posted the most eagles in a single season (17), while also carding the best par-5 scoring in program history at 4.7688. His squad also captured the lowest 54-hole total in program history after finishing 38-under-par at the Stitch Intercollegiate. The Bucs also posted the second-lowest round vs. par (-18) and the third-lowest 36-hole total vs. par (-18).

During the 2019-20 campaign, the Bucs remained in the spotlight of the Southern Conference. As a team, ETSU competed in seven events in the shortened season, finishing Top 5 in five events and Top 2 in four events. ETSU placed first at the Hoakalei CC Invitational in Hawaii, while recording runner-up finishes at the Carpet Capital Collegiate, Bank of Tennessee Intercollegiate and the Seminole Intercollegiate. The team also jumped to a ranking of No. 23 in GolfStat under Amos’ direction.

Amos’ team also had a plethora of individual success, including individual titles by Jack Rhea (Bank of Tennessee Intercollegiate) and Shiso Go (Hoakalei CC Invitational). In addition, Amos coached six SoCon Golfer of the Week honors (including three by Rhea), and one SoCon Golfer of the Month. Rhea also jumped all the way inside the Top 25 in the individual rankings, before finishing the year No. 36 according to GolfStat.

While with South Carolina in 2017, the Gamecocks just missed advancing to its fourth NCAA Championship in a five-year span, while posting its fourth-lowest scoring average in program history at 286.97. In 2016-17, the Gamecocks advanced to the first ever SEC Match Play after placing fifth in the stroke play format at the SEC Championships. Amos helped coach Keenan Huskey to Golfweek All-American honors, while he and Scott Stevens were named second team All-SEC and selected to the PING All-Southeast Region team in 2016-17.

A native of Leicester, England, Amos represented his native country internationally at both the under-16 and under-18 levels. His wife, Dani, is a native of Barnwell, S.C., and the couple have two sons, Jenson King and Jasper Lewis.