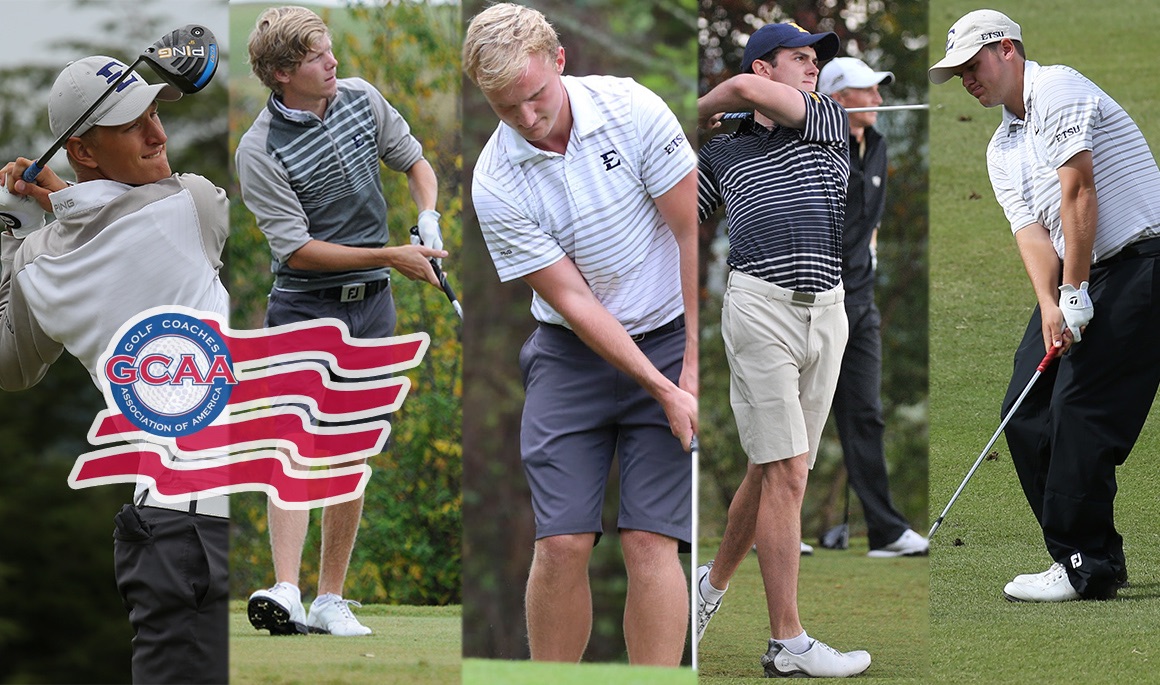 The five golfers were the most by any Division I school to receive All-America Scholar honors. This also marks the third year ETSU has had multiple student-athletes receive the award as the Bucs saw three recipients earn the honor in 2010 and 2011. Pugh joins Gareth Shaw, Seamus Power, Paul O’Kane and Rhys Enoch as the group of Buccaneers to become two-time winners, while Meronk joins Shaw and Enoch to receive this honor and All-American accolades in the same season.

Rising senior Chris Hickman is a history major and received All-SoCon honors, while being named to the SoCon Academic Honor Roll this past season. The Centreville, Md., native played in eight tournaments for the Buccaneers in 2014-15 and posted a pair of top-5 finishes. Hickman registered a 73.39 scoring average, while totaling 11 rounds of par or better and three in the 60s.

Kristjansson, a physics major, won two tournaments and represented ETSU at the 2015 NCAA Championship. The Reykjavik, Iceland native was named SoCon Golfer of the Week (March 18) and General Shale SoCon Student-Athlete of the Week (April 14). Kristjansson played in 12 tournaments and registered a scoring average of 73.68. The Buccaneer rising senior won his first collegiate tournament at the Seminole Intercollegiate (March 13-15) with a 54-hole score of 17-under-par 199, marking the lowest score in program history. In addition, Kristjansson tied the ETSU single-round record and course record (Southwood Golf Course) with a 9-under 63 in the opening round. Following the win in Tallahassee, Kristjansson shared medalist honors at the Greenbrier Collegiate Invitational (April 13-14) after finishing the shortened event at 3-under-par 137, while leading the Bucs at the NCAA Regional (San Diego) after finishing sixth at 3-under-par 213. This season, Kristjansson posted his first-ever hole-in-one at the NCAA Championships, while totaling 10 rounds of par or better and six rounds in the 60s.

ETSU rising senior Adrian Meronk played in all 13 tournaments for the Buccaneers, posting three wins and nine top-10 finishes while being ranked as high as 14th in the national polls. The finance major received All-American honors from PING and Golfweek, while also being selected to the PING All-Region Team. Furthermore, Meronk was named SoCon Player of the Year, First Team All-Southern Conference and SoCon Player of the Month (April). The Buccaneer leader won the season-opening tournament at Inverness Intercollegiate (Sept. 22-23) and earned co-medalist honors two weeks later at the Wolfpack Intercollegiate (Oct. 6-7) The Palmer Cup participant registered four straight top-10 finishes to start the season and recorded his lowest round of the year with a 66 in the second round of the Warrior Princeville Invitational – where he finished tied for seventh. Meronk led ETSU in scoring average (70.65) and totaled 29 rounds of par or better this season, including 12 rounds in the 60s.

Pugh wrapped up his final year playing in 11 tournaments for the Buccaneers before graduating with a degree in sport management. The ETSU graduate registered a pair of top-10 finishes, while posting a scoring average of 73.6. Pugh tied for seventh at the Inverness Intercollegiate and tied for eighth at the Bank of Tennessee Intercollegiate. The Pontypridd, Wales native recorded five eagles, which ranked second on the team.

A total of 206 players in Division I, 91 in Division II and 17 in NAIA earned the honor. Additionally, 34 honorees were added to the previously released Division III Cleveland Golf/Srixon All-America Scholars.

To be eligible for Cleveland Golf/Srixon All-America Scholar status an individual must be a junior or senior academically, compete in at least three full years at the collegiate level, participate in 50-percent of his team’s competitive rounds, have a stroke-average under 76.0 in Division I, 78.0 in Division II, 77.0 in NAIA and 79.0 in Division III, and maintain a minimum cumulative grade-point average of 3.2. A recipi­ent must also be of high moral character and be in good standing at his college or university.