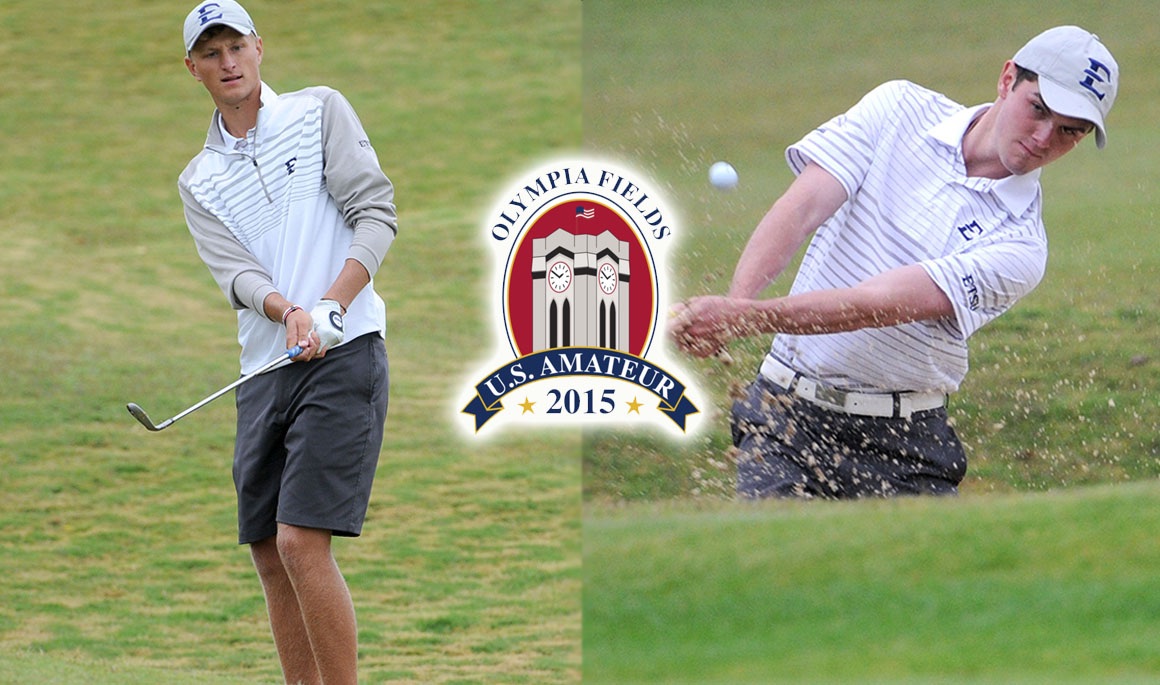 Adrian Meronk (left) shot a 1-over-par 73 on Tuesday at the U.S. Amateur. Chris Hickman (right) was still on the course when play was suspended.
Second round play suspended at U.S. Amateur
Related Links

Meronk posts 1-over in round two; Hickman still on the course

OLYMPIA FIELDS, Ill. (Aug. 18, 2015) – Second round play at the 115th U.S. Amateur Championship was suspended due to darkness on Tuesday evening at Olympia Fields Country Club.

Due to inclement weather rolling through the Midwest overnight, Tuesday’s second-round play was delayed by 90 minutes, resulting in the horn being sounded at 8:13 p.m. (EDT), signaling the suspension of play for darkness.

ETSU senior Adrian Meronk (Wroclaw, Poland) posted a 1-over-par 71 on the North Course Tuesday afternoon, placing him tied for 56th at 3-over-par 143 for the tournament.

The Buccaneer leader made a move late in round two, as he was 2-over through his first 10 holes before carding two birdies over a three-hole stretch, moving back to even-par with five holes remaining. From there, Meronk parred four of his final five holes, but he bogeyed the par-3, 217-yard No. 7 to finish with the 71.

The cutline when play was suspended on Tuesday night was set at 3-over.

Chris Hickman (Centreville, Md.), who began the day tied for 30th at even-par, recorded three bogeys and two double-bogeys on the front nine of the North Course, moving the Buccaneer senior to 7-over-par for the tournament. The Centreville, Md. native was on the back nine when play was suspended and will wrap up his round on Wednesday morning.

Brett Coletta (of Australia) is the clubhouse leader at 7-under-par 133, while two players on the course are at 4-under. David Oraee, from Greeley, Colo., finished with a 3-under 67 on Tuesday and sits in second-place at 6-under-par 134.

A total of 312 players began play on Monday. The field will be narrowed to 64 players for the match-play bracket, starting on Wednesday.

For complete coverage and live scoring of the 2015 U.S. Amateur Championship, visit http://www.usga.org/championships/2015/u-s--amateur.html.

Visit ETSUBucs.com for recaps of each round for Meronk and Hickman.