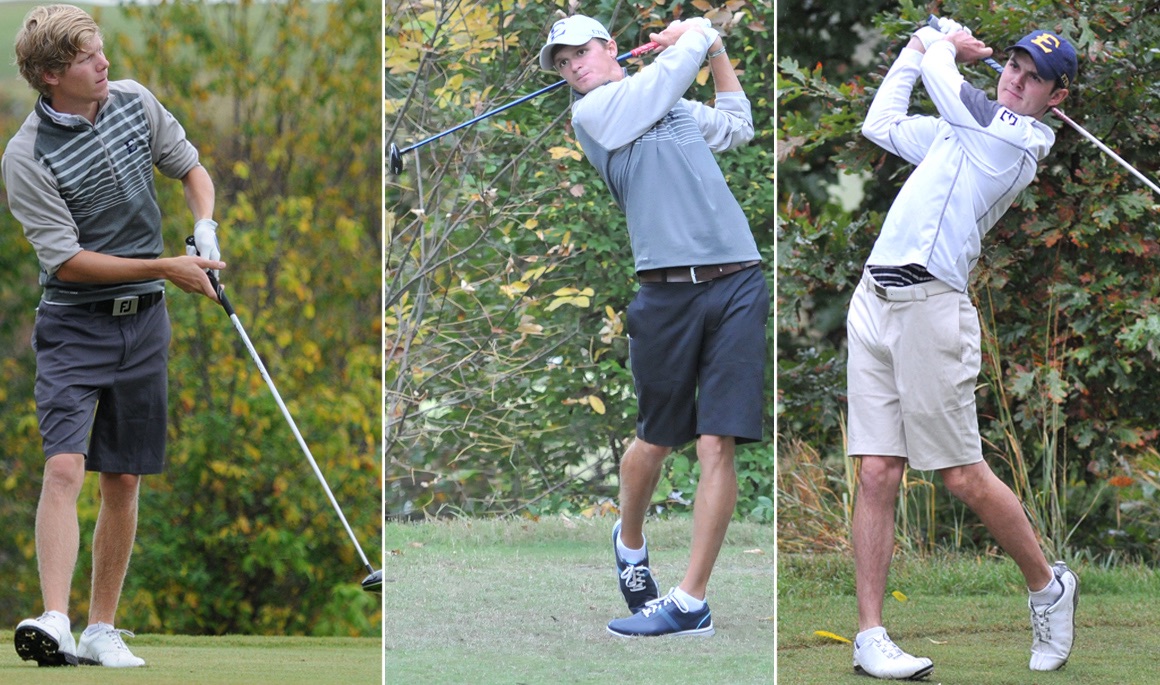 Bucs head into final round two shots back of leader California

TOLEDO, Ohio (Sept. 21, 2015) – The ETSU men’s golf team put itself in contention to win a second straight title at the Inverness Intercollegiate as the Buccaneers sit in second place following Monday’s first two rounds at the Inverness Golf Club.

The Bucs, who were tied for first after day one a year ago, held off then-No. 1 South Florida to earn the championship by two strokes. Should the Blue and Gold become the first team to post back-to-back wins at Inverness – a course that has served host for the 2009 NCAA Men’s Golf Championships, four U.S. Opens, two U.S. Senior Opens, two PGA Championships and one U.S. Amateur – ETSU will have to overcome a two-stroke deficit over team-leading California.

Despite playing on one of the toughest courses and facing some elements early in the day, ETSU battled the adversity to remain in contention.

“This is one of the top courses in the United States and it played very tough today,” said head coach Fred Warren, who has three golfers in the top-11 heading into Tuesday’s final round. “It was windy in the morning, and I think Inverness was the real winner today, as the course made it difficult on everyone. This is a great experience for our team as we are playing a really difficult course against tough competition. We are looking forward to going out there tomorrow and playing the final round.”

The trio of Mateusz Gradecki (Oborniki Slaskie, Poland), Gudmundur Kristjansson (Reykjavik, Iceland) and Chris Hickman (Centreville, Md.) helped keep ETSU near the top of the leaderboard on Monday as they sit in the top-11, respectively.

Gradecki, who paced the Blue and Gold on day one, is tied for third at 2-over-par 144 (71-73). The Buccaneer junior was consistent the entire day as his 29 pars were the most in the 75-man field, while he also carded three birdies, three bogeys and one double-bogey in 36 holes. In round one, Gradecki posted a bogey on his second hole of the morning, but after a stretch of 10 consecutive pars, the Buccaneer played the final six holes at 1-under to finish with his 71. Likewise, Gradecki got off to a bumpy start in round two, as he was plus-3 three after his first three holes, but played the final 15 holes at 1-under to hang up the 73 and put himself in three-way tie for third.

Meanwhile, Kristjansson is right behind his teammate as the Icelander is tied for sixth at 3-over-par 145 (73-72). Kristjansson, who represented the Bucs in the 2015 NCAA Championships, totaled three bogeys and a birdie in round one, and overcame a quadruple-bogey in the afternoon to finish 1-over 72 for the round. The Buccaneer senior posted five birdies in the second round to bounce back from the miscue on the par-4 No. 5.

Hickman also gave the Blue and Gold a lift in the afternoon as he shot a 1-over 72 to move into a tie for 11th at 5-over-par 147. Following a 4-over 75 in the opening round, Hickman was tied for 20th, but he jumped nine spots up the leaderboard by using a strong finish in round two. The Centreville, Md. native was 2-over through his first seven holes, but played the final 11 holes at 1-under, courtesy of birdies on a pair of par-4s (No. 10 and 16). Like Gradecki, Hickman was also consistent as he finished with 25 pars in the first 36 holes on Monday.

“Mateusz gave us a solid 36 holes today and Gudmundur overcame a tough hole early in the second round by posting five birdies to keep us in it,” added Warren. “Chris also kept us in there with his round in the afternoon. I am really proud of them for keeping us in contention.”

Individually, California’s KK Limbhasut holds a two-stroke lead after the first two rounds as he finished 2-under-par 140 (70-70) on Monday. Michigan’s Chris O’Neill is in second at even-par 142 (69-73), while Gradecki and two other golfers are four shots back of Limbhasut.

As the Bucs are two shots back of Cal for the team lead, ETSU has a two-stroke advantage over third-place Purdue and a five-shot lead over fourth-place Michigan.

The Blue and Gold tee off Tuesday morning at 8:50 a.m., and will be paired with California and Purdue. There will be live scoring (every 3-6 holes) available through BirdieFire (http://bit.ly/1NtNa7G).