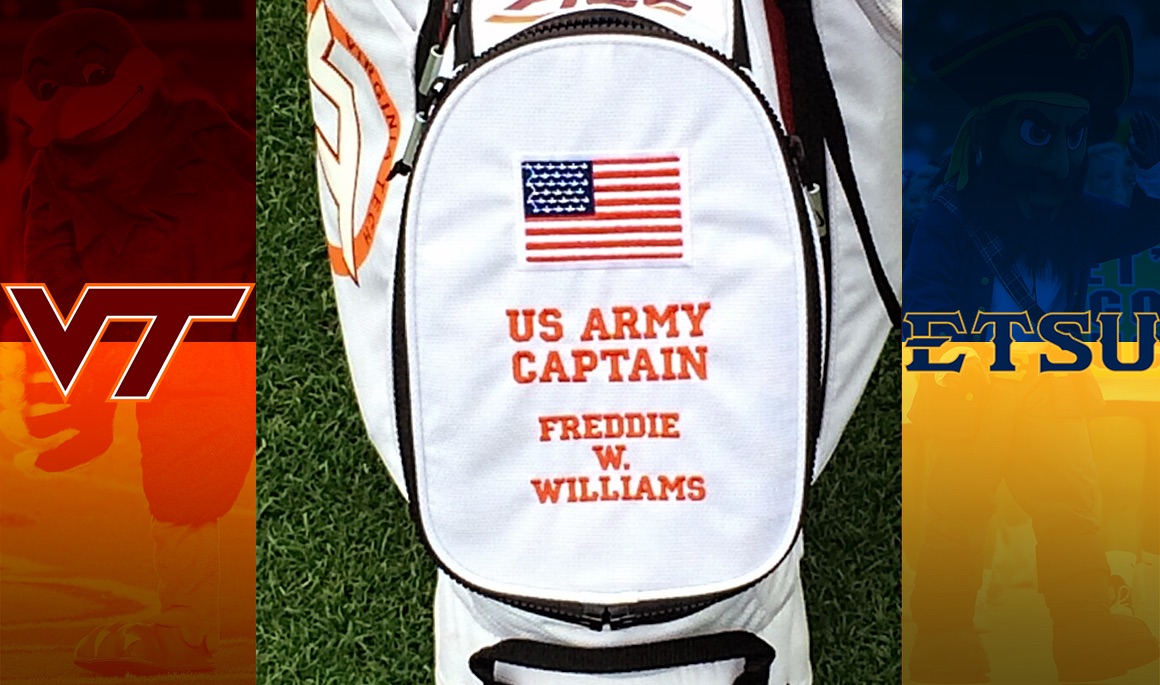 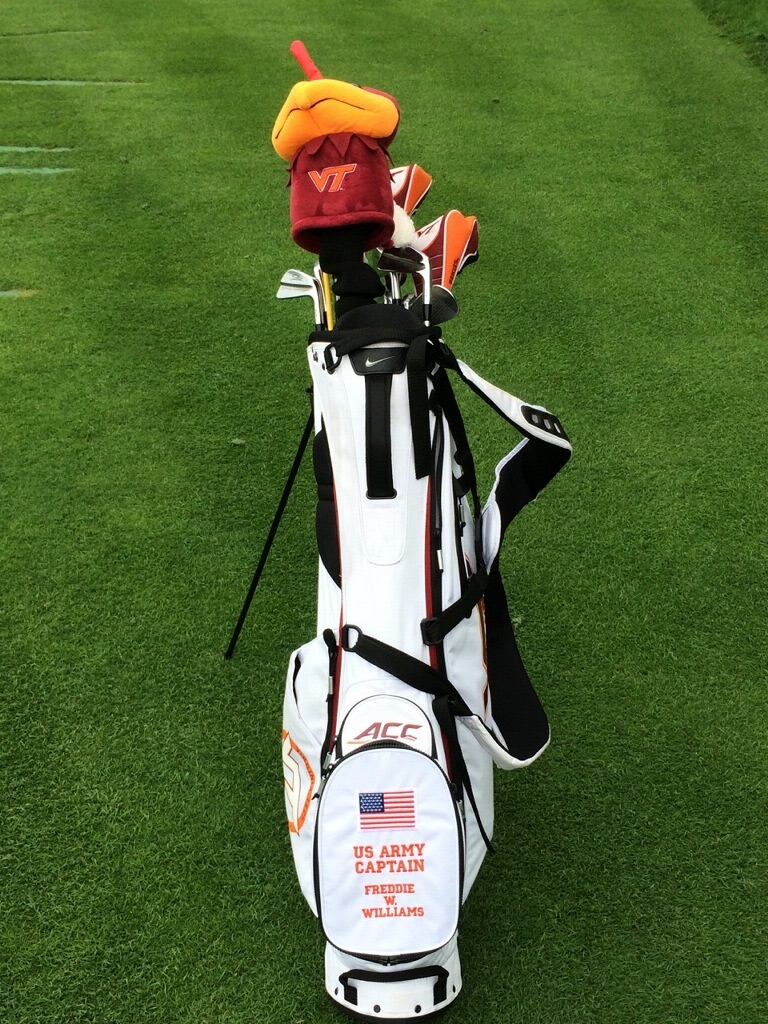 It’s only fitting the Hokies will display their support for Captain Williams, U.S. Army Retired, at this weekend’s 18th annual Bank of Tennessee Intercollegiate, which is being played on ETSU’s home course at Blackthorn Club in Jonesborough.

Virginia Tech is honoring the ETSU alum, as junior co-captain Joey Lane will be carrying a golf bag with Captain Williams’ name and rank embroidered on it.

“It means a lot to honor Captain Williams this weekend at the Bank of Tennessee Intercollegiate – a tournament hosted by his alma mater,” said Hardwick, who first met Williams in 1967 while playing at Virginia Tech. “Coach Warren and I have been friends for over 30 years, and when I contacted him about doing this he was very supportive. Our players are very excited, because we are honoring someone who is not only a great supporter of our program, but someone who gave so much for our country. There’s no greater service than that and our team takes great pride in honoring Captain Williams.”

When ETSU men’s golf head coach Fred Warren heard the news, he was delighted to learn more about what Virginia Tech was doing for Captain Williams.

"This hits close to home in more ways than one. Being a fourth generation Marine Officer, I was thrilled when Coach Hardwick shared the idea of honoring Freddie Williams at this weekend’s Bank of Tennessee Intercollegiate," said Warren, whose father once was the Commanding Officer of an ROTC unit, as well as a veteran of World War II, the Korean War and Vietnam. “Coach Hardwick and I have been friends for over 30 years and to have Virginia Tech honor one of our alums and a ROTC Hall of Fame member at our tournament this weekend is a special tribute to not only Captain Williams but to all service members.”

Captain Williams showed a tremendous amount of courage and heroics during Vietnam as he was assigned to the 155th Assault Helicopter Company in Ban Me Thout, Central Highlands in II Corps, Republic of Vietnam on September 22, 1966.

Just two months later, Williams was medically retired in the grade of Captain after he was severely injured in a helicopter crash that was associated with a classified combat mission in support of a U.S. Special Forces Team west of Ban Me Thout on November 24, 1966.

Captain Williams, the aircraft commander, and his crew performed an extraction of a four-member Special Forces Team that had been compromised and was in danger of being captured or killed by the enemy while operating across the border. Captain Williams suffered severe spinal cord injuries and was initially paralyzed from the waist down for many months. Following therapy and extended treatment in Veterans Administration (VA) hospitals for years, Captain Williams learned to walk with assistance. Eventually, he learned to walk unassisted and began driving.

“Freddie was hospitalized for a long time and the doctors didn’t know if he would ever walk again,” said Hardwick. “Thankfully, he was in good care at the VA hospitals and was able to get the treatment needed to help with his injuries.”

During that time, Coach Hardwick was the PGA Professional/General Manager at Giles Country Club from 1973-83, which is where their friendship blossomed.

“Freddie started coming out to the country club and would follow us around during our rounds,” added Hardwick, who eventually taught Captain Williams to play golf. “As time grew, we became close. We would go out (on the course) in the evenings and that’s when he started to play golf. At first, I had to tee the ball up and get the ball out of the hole for him, but as time went on, he didn’t need my assistance. By the time I left Giles, he was around a 22-23 handicap.”

“When I left and became head coach at Virginia Tech, his friendship followed me to Blacksburg,” said Hardwick. “Freddie came out to visit the team and made the first-ever donation to our program. Since day one, he’s been a great supporter of our program and was also the Honorary Starter at our Hokie Spring Swing Golf Classic for over 20 years.”

It was at Virginia Tech where Coach Hardwick and the Hokies came up with the idea to honor Captain Williams when two-time All-American Trevor Cone played at The Patriot All-America. At this tournament, 84 of the top collegiate players named to the PING All-America team in NCAA Division I, II and III, NAIA and NJCAA, AJGA, one player from each military academy and select international players competed in the 54-hole tournament. Each player honored the military by carrying a bag with the name, rank and service of a fallen or severely wounded soldier embroidered on the pocket. Following the tournament, the bags went to the players’ school for auction, with proceeds benefiting the Folds of Honor.

“After playing in the tournament, our team thought it would be nice if we could honor someone locally,” said Hardwick. “The first person who came to mind was Captain Williams since he has meant so much to our program and the community. We first wanted to run the idea by his family. His sister lives in the area, so we approached her and she helped us make this a reality. We didn’t want to tell Freddie until everything came together. After Nike helped create the bag, we called him to let him know what we were doing. Freddie got emotional after hearing what we did and the first thing he did was ask if he could help pay for the bag.”

Coach Hardwick and the Hokies look forward to unveiling the bag this weekend and showing it to Captain Williams in the near future.

“Our team is looking forward to visiting with Freddie and showing him the bag,” added Hardwick. “Freddie is such a charismatic person and we miss seeing him at practices since he hasn’t been able to come by as of late. He’s been a great role model – to not only me – but also our program. He’s well-respected and we are fortunate to have him with us.”

The Bank of Tennessee Intercollegiate begins this Friday, Oct. 9 at The Blackthorn Club. Virginia Tech tees off at 9:20 a.m., while ETSU goes out at 10:10.

The Virginian Leader and PatriotAllAmerica.com contributed to this story