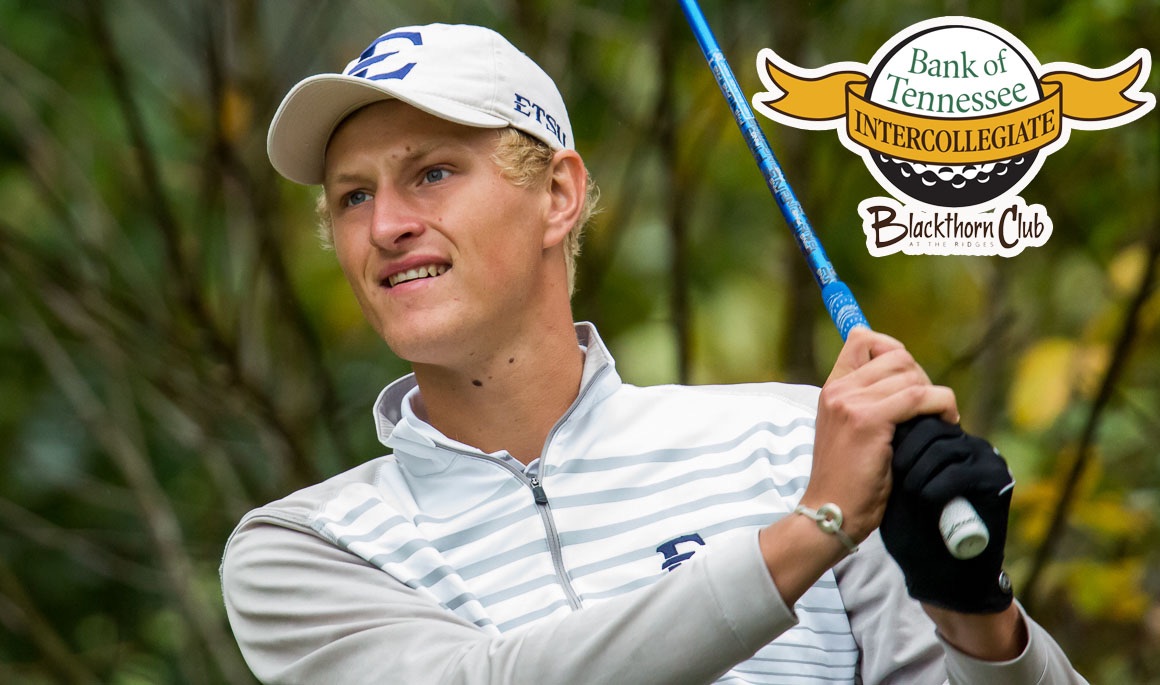 Senior Adrian Meronk moved into a tie for fifth following second round play at the Bank of Tennessee Intercollegiate on Saturday.
Meronk makes move at BOT
Related Links

JONESBOROUGH, Tenn. (Oct. 10, 2015) – After Friday’s opening round of the Bank of Tennessee Intercollegiate, ETSU senior Adrian Meronk (Wroclaw, Poland) said he needed to work on his putting.

It’s safe to say Meronk’s time on the practice green paid off.

The Buccaneer All-American charged up the leaderboard during second round play, as Meronk tied his lowest collegiate career score with a 6-under-par 66 Saturday at Blackthorn Club. This marked the third time Meronk has carded a 66, as he accomplished the feat last year at the Warrior Princeville Invitational and at the 2014 Mason Rudolph Championship.

Meronk, the 2015 SoCon Player of the Year, entered the day tied for 32nd, but after totaling an eagle and nine birdies – including five straight to end the round – the Wroclaw, Poland native moved into contention heading into Sunday's final round. The Buccaneer senior, who recorded a triple-bogey on the par-5 No. 8 and a bogey on the par-4 No. 9, is tied for fifth at 4-under-par 140 and is four shots off the lead.

“I got off to a good start as I was 5-under through seven, but the next two holes really set me back with that triple bogey on No. 8 and the bogey on No. 9,” said Meronk. “Fortunately, I was able to get back on track and finished strong with the five straight birdies to end the round.

Overall, I am happy with my play today. After the turn, I asked Coach Warren to follow me on the back nine, so he could check my alignment. I felt it was a bit off and he helped with that.”

Coach Warren was also pleased with Adrian’s performance on Saturday.

“I walked the last nine holes with Adrian and he was focused. He played very well on the back nine and had a great round today,” said Warren.

Charlotte’s Victor Wiggins and Virginia Tech’s Joey Lane began the day tied atop the individual leaderboard, but Wiggins gained a little bit of breathing room over the Hokie co-captain after registering a 5-under 67 on Saturday. Wiggins holds a two-stroke advantage over Lane at 8-under-par 136, while Virginia’s Derek Bard also hung up a 6-under 66, moving him into a tie for third at 5-under-par 139.

Lorenzo Scalise of Tennessee went low on Saturday as he posted a 7-under 65, which was one stroke shy of tying the tournament’s record for a single round.

As a team, ETSU shot a 4-under 284 on Saturday and sits in 11th-place at 11-over-par 587 for the tournament. Like Meronk, fellow senior Gudmundur Kristjansson (Reykjavik, Iceland) also put together a strong finish to his round as he birdied four of his final eight holes en route to recording a 1-under 71, while junior Mateusz Gradecki (Oborniki Slaskie, Poland) shot a 1-over 73. Senior Chris Hickman (Centreville, Md.) and freshman Geuntae Kim (Daegu, South Korea) both finished at 2-over 74 on Saturday.

“Today’s round was much better,” said Warren. “We got off to a pretty good start and finished well. We had some hiccups in between, but overall we showed an improvement.”

Penn State fired an 11-under 277 in round two and took over sole possession of first-place at 10-under-par 566. The 21st-ranked Nittany Lions, who began the day tied atop the leaderboard with two other teams, has a four shot lead over No. 37 Kent State and are nine strokes ahead of No. 57 Louisville.

Following 36-holes, Hickman is tied for 32nd (2-over-par 146), while Kristjansson is tied for 55th (6-over-par 150) and Gradecki is tied for 59th (7-over-par 151). Meanwhile, red-shirt freshman Conor Rodrigues (Kingston, Ontario, Canada) and sophomore Cayman Ratliff (Kingsport, Tenn.) are playing as individuals. Rodrigues, who finished at even-par 72 on Saturday, is tied for 39th and Ratliff is tied for 62nd at 8-over-par 152.

Sunday’s final round play gets underway at 8:30 a.m. ETSU is grouped with Virginia Tech and UNC Wilmington, and will tee off at 9:50 from No. 10.