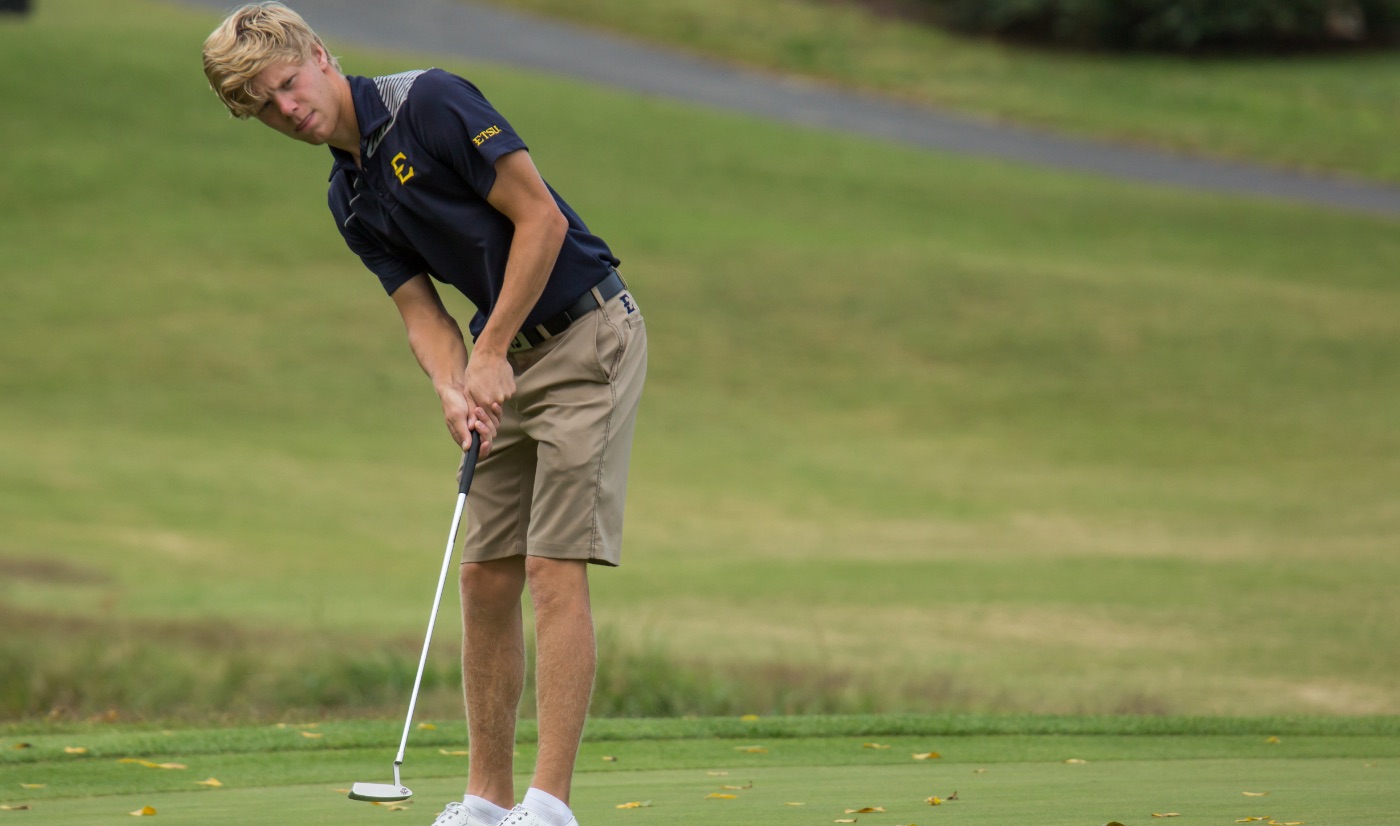 ETSU posts 6-under 282 to move into fourth place

ALPHARETTA, Ga. (Oct. 17, 2015) – Needing to make a move to get into contention at the U.S. Collegiate Championship, the ETSU men’s golf team did so in fine fashion on Saturday afternoon at The Golf Club of Georgia – Lakeside Course.

Facing windy conditions, the Buccaneers – who were the last group to tee off on Saturday –

registered the lowest team score in second round play. ETSU fired a 6-under-par 282 and moved into fourth-place among the 17-team field, featuring seven teams ranked in the top-10 (12 total in the top-25). Overall, the Bucs are 1-under-par 575 following the first two rounds.

Wake Forest takes a one-shot lead into Sunday’s final round as the third-ranked Demon Deacons posted a 3-under 285 in round two and are 7-under-par 569 for the tournament. Top-ranked Auburn – who also recorded a 3-under 285 on Saturday – is in second at 6-under-par 570, while No. 4 Florida State is third at 4-under-par 572.

As a group, the Blue and Gold stepped up and put themselves among the leaders and head coach Fred Warren was proud of the team effort.

“I am proud of our overall effort today. We played really well in challenging conditions and on a challenging course,” said Warren. “It takes a team effort to post the lowest score of the round and everyone was solid today.”

For the second straight day, senior Gudmundur Kristjansson (Reykjavik, Iceland) led the Blue and Gold as he carded four birdies and 14 pars en route to finishing with a 4-under 68. Kristjansson collected his four birdies in his first nine holes and sits three shots back at 5-under-par 139.

“I hit the ball really well today and made some big putts early in the round,” said Kristjansson. “I hit 17 greens and was pleased with my play. It feels great to have our entire team play well, as we had the lowest score by three shots. It says a lot about our team and shows how good we can be when we play well.”

Auburn’s Will Long sits atop the individual leaderboard at 8-under-par 136, while Cameron Young (Wake Forest) is one shot behind and Virginia’s Derek Bard – who began the day with the lead – is two strokes behind at 6-under-par 138.

Overall, the Bucs’ solid team performance also stemmed from senior Adrian Meronk (Wrocalw, Poland) moving 14 spots up the board as he’s one of six golfers tied for 11th at 2-under-par 142. Meronk totaled four birdies and two bogeys en route to carding a 2-under 70 on Saturday. Like Meronk, red-shirt freshman Conor Rodrigues (Kingston, Ontario, Canada) also shot a 70 in round two, marking his lowest collegiate round. Rodrigues and Mateusz Gradecki (Oborniki Slaskie, Poland) are tied for 35th at 3-over-par 147, while freshman Geuntae Kim (Daegu, South Korea) moved nine spots up the leaderboard following a 2-over-par 74 and is tied for 74th.

Sunday’s final round begins at 8 a.m., while the Bucs go out at 11:30. ETSU will be paired with Clemson and Stanford. Live scoring will be provided via Golfstat.