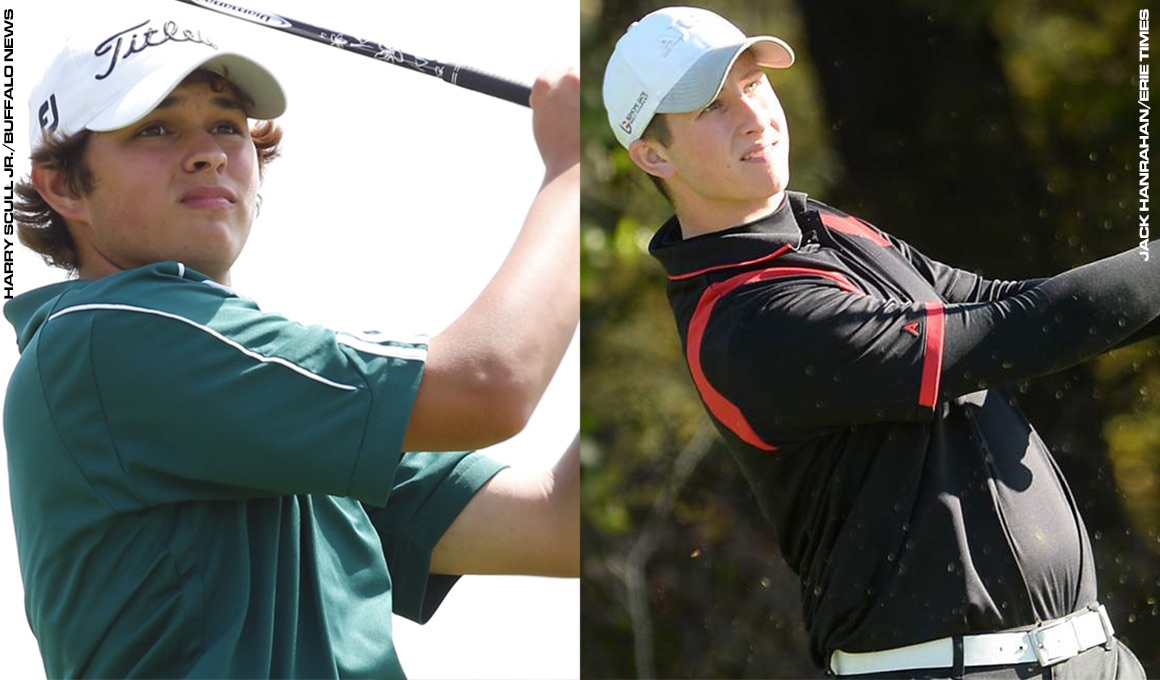 Ben Reichert (left) and Zack Ford (right) have signed their national letters of intent to play for the Buccaneers starting in the fall of 2016.
Warren announces the signing of two golfers

Reichert is a four-year varsity letterwinner at Williamsville North High School where he became the first golfer in school history to win back-to-back ECIC (Erie County Interscholastic Conference) and Section VI championships. Furthermore, Reichert also set the school record for the lowest nine-hole score by recording a 32 twice, while registering a nine-hole scoring average of 34.9 in 2014-15 and 35.16 in 2015-16. This past August, Reichert won the 2015 N.Y.S. Junior Amateur Championship and the AJGA New Era Junior Championship. In addition to earning medalist honors, Reichert also posted runner-up finishes at the 2015 AJGA FORE Performance Junior Championship and the AJGA Junior at Talbot.

When asked about choosing ETSU, Reichert – who plans to major in business – liked the campus size and the golf program.

“I really liked the campus size and how everyone made me feel comfortable on my visit,” said Reichert. “I also liked the golf facility and how Coach Warren has built a successful golf program at ETSU. I hope to continue to add to the success at ETSU and become an All-American.”

John Burns, the head coach at Williamsville North, said Reichert is one of the best players he has coached.

“Ben is probably the best golfer I have coached at Williamsville North,” said Burns. “He drives the ball straight and long and his distance control with irons is great. He is a solid putter who has great confidence to make a good score on every hole.”

Ford, a multi-sport athlete at Cochranton Junior-Senior High School, has lettered in both golf (four years) and basketball (two years) for the Cardinals. The Cochranton, Pa. native was named Meadville Tribune Player of the Year, while being a three-time first team all-region and three-time first team all-district recipient. This fall, Ford finished third at the PIAA Championship en route to earning first team all-state accolades. In addition to his high school play, Ford has posted one top-5, two top-15 and three top-20 finishes on the American Junior Golf Association level. In August, Ford finished fourth at the New Era Junior Championship with a 2-under-par 214 (70-68-76) at Harvest Hill Golf Course in Orchard Park, N.Y., while finishing tied for 12th at the JoS. A. Bank / David Leadbetter Championship at Cattail Creek Country Club in Glenwood, Md.

When it came to a decision, Ford chose ETSU based on the players, Coach Warren and being able to play for a winning program.

“I chose to sign with ETSU because of Coach Warren and I felt comfortable with the players during my visit,” said Ford, who plans to major in business/sport management. “I also loved the golf facility and I look forward to continuing ETSU’s tradition-rich program. My goal is to help the Bucs advance to the NCAA Championship all four years as well as become an All-American – both academically and athletically.”