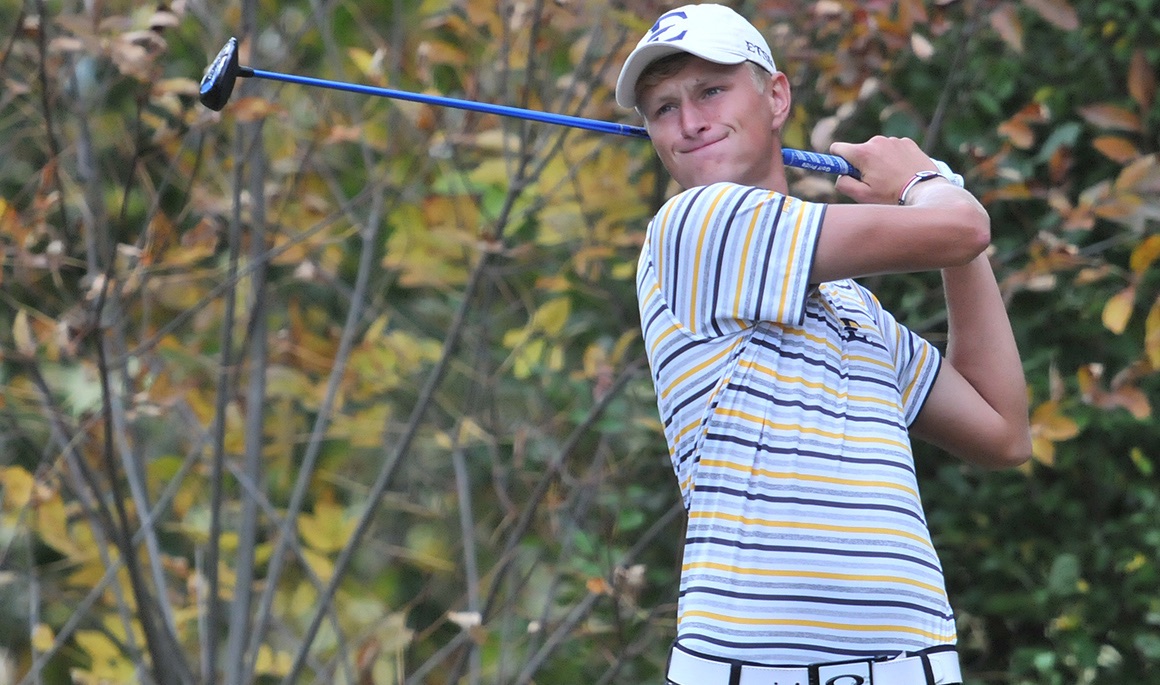 Senior Adrian Meronk made five birdies and 13 pars on Friday.
Meronk tied for first after first round at Seminole Intercollegiate
Related Links

ETSU All-American only player to post bogey-free round on Friday; Bucs tied for third

TALLAHASSEE, Fla. (March 11, 2016) – ETSU senior Adrian Meronk (Wroclaw, Poland) did something no other golfer was able to do in Friday’s opening round of the Seminole Intercollegiate at Southwood Golf Club.

Meronk – the 29th ranked player via Golfstat – was the only golfer in the 78-player field to finish with a bogey-free round, and for his impeccable play, the Buccaneer All-American finds himself atop the leaderboard following day one of the tournament in Tallahassee, Fla. The Wroclaw, Poland native totaled 13 pars and five birdies and is tied for first with VCU’s Adam Ball at 5-under 67, while Jacksonville’s Franck Medale is one shot back at 4-under 68.

Meronk birdied his first hole of the day as he carded a four on the par-5, 562-yard No. 10 before stringing together eight consecutive pars until registering his second birdie on the par-5, 547-yard No. 1. From there, the Buccaneer leader birdied three of his final eight holes to move into first.

“I felt comfortable out there and put together a solid round today,” said Meronk, who hit all 18 greens on Friday. “I really like this course as it sets up nicely with some short par-4s and par-5s. I didn’t make many mistakes. I had a lot of birdie chances, but could’ve made a few more putts. The conditions were windy today, so I am pretty happy with my overall play. Our team is also in good shape. We just have to go out there and play our best tomorrow.”

As a group, ETSU sits tied for third with Troy and tournament host and fourth-ranked Florida State at 3-under-par 285. The group is only three shots back from leader James Madison as the Dukes fired a 6-under-par 282.

The Bucs had a roller coaster type round as ETSU was in last thru nine holes, but the Blue and Gold jumped all the way into sole possession of first with three holes remaining. However, ETSU played the final three holes at 5-over forcing them to drop into a tie for third.

“It was a roller coaster round for us,” said head coach Fred Warren. “We got off to a slow start and were in last after nine holes, but caught fire and were in the lead when scores were posted after holes 12-15. All in all, the guys did a good job today and we hung in there.”

Junior Mateusz Gradecki (Oborniki Śląskie, Poland) and sophomore Cayman Ratliff (Kingsport, Tenn.) are both tied for tied for 27th at ever-par 72, while senior Gudmundur Kristjansson (Reykjavik, Iceland) – who won earned medalist honors a year ago at this tournament – is tied for 39th at 2-over-par 74.

After sitting 3-over thru his first nine holes, Ratliff got into rhythm as he birdied five straight holes following the turn, moving him to 2-under with four holes remaining. The Kingsport, Tenn. native bogeyed two of the last four holes, which dipped him back to 72. Meanwhile, Gradecki was even thru nine and moved to 2-under after posting birdies on No. 1 and No. 4, but bogeyed two of his last three holes to move him back to even. Kristjansson found himself even going into the last hole of the day, but he carded a double-bogey on the par-4, 459-yard No. 9, resulting in the 74.

Following the round Ratliff talked about his stretch of five straight birdies, which tied a program record.

“I didn’t play well on the opening nine, but my goal was to get one back on the first hole once we made the turn. I hit some good shots on No. 1 and that first birdie gave me a lot of confidence,” said Ratliff, who also chipped in for his second birdie on No. 2. “During that stretch, I was able to free myself up and hit some good shots.

“Overall, the team played well after making the turn and it was big to get back into contention. Once we made the turn, we were in last, but after playing No. 6, I saw we made the jump to first. We lost some strokes down the stretch, but Adrian really kept us near the top with birdies on No. 7 and 8. It was important to stay within a couple strokes of the leaders, because you can’t win the tournament on day one but you can lose it.”

Due to inclement weather expected to hit the Tallahassee region this weekend, the tournament committee decided to play 36-holes on Saturday to wrap up the tournament. Second round action begins with a shot-gun start 8:30 a.m. The Bucs will be grouped with Troy and Penn State.

Live scoring for the tournament is available via Golfstat. Click here to access live scoring. Full recaps with scores will be available on ETSUBucs.com following each round.