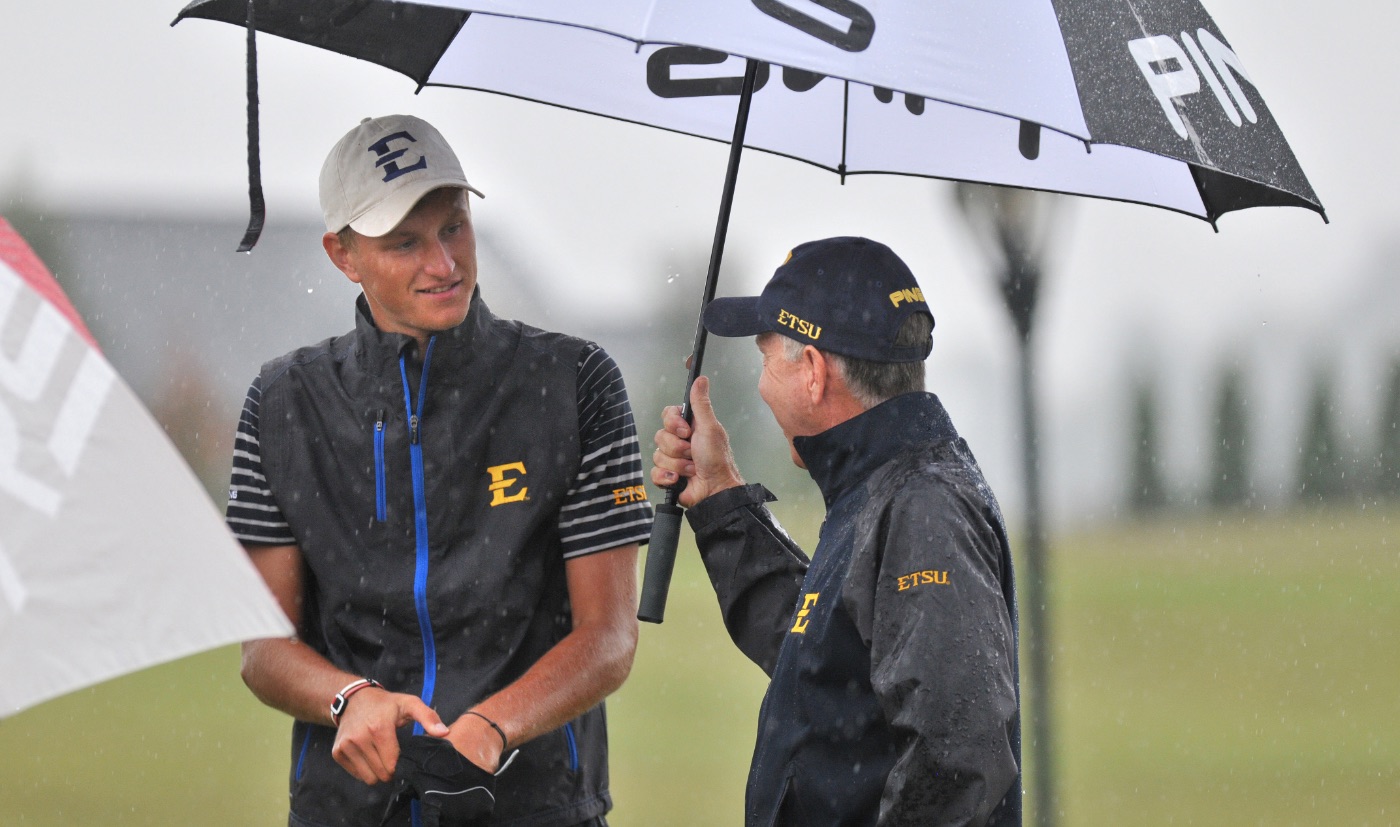 Day one of Northwest Classic suspended due to darkness
Related Links

ETSU men's golf in fourth; Meronk tied for second out in Oregon

CANBY, Ore. (March 21, 2016) – After battling with several bouts of rain – including a lengthy delay due to water pooling on the greens – day one of the Airstream Adventures Northwest Classic was suspended due to darkness on Monday night from the Willamette Valley Country Club in Canby, Ore.

Play was suspended at 10:30 p.m. ET, with the majority of the teams having three holes remaining in the second round. The tournament will resume Tuesday morning with the conclusion of round two at 11 a.m. ET, while the third and final round will start immediately after the completion of second round play.

The ETSU men’s golf team was in fourth-place after the first 18 holes on Monday, while senior All-American Adrian Meronk (Wroclaw, Poland) was tied for fourth. The Bucs shot 1-over-par 289 in the opening round and Meronk was three shots off the lead following his 4-under 68.

When was play was suspended, the Buccaneers were 3-under in the second round and still sitting in fourth, whereas, Meronk – the 23rd-ranked player via Golfstat – moved into a tie for second at 6-under. Both Meronk and Seattle’s Joe Harvie are one shot behind leader Aaron Wise of Oregon. Wise fired a 5-under 67 in round one and was 2-under thru 15 holes in round two.

Meronk got off to a fast start on Monday morning as he birdied five of his first seven holes – and after picking up his only bogey of the round on the par-4, 9th – the Buccaneer leader parred all nine holes on the back nine to finish with his 68 in the opener. Prior to the stoppage of play in round two, Meronk carded one birdie and one bogey on the front nine, while registering back-to-back birdies on No. 13 and 14 moving him to 2-under with three holes remaining.

Oregon held the team lead after first round scores were tallied, as the 28th-ranked Ducks shot a 9-under-par 279 and were one stroke ahead of No. 32 UNLV. However, when play was called, the Runnin’ Rebels leapfrogged Oregon for a one-shot lead at 13-under. Seattle – who was sitting in third at 4-under-par 284 following the conclusion of round one – still sits in the same spot at 8-under.

ETSU sophomore Cayman Ratliff (Kingsport, Tenn.) had an up-and-down opening round as he registered a 1-over 73 (T24), while senior Gudmundur Kristjansson (Reykjavik, Iceland) and freshman Geuntae Kim (Daegu, South Korea) were tied for 34th at 2-over 74 after 18 holes of competition. Kristjansson made a charge in round two as he was 2-under when play was halted, which moved him into a tie for 14th at even-par. Like Meronk, Kristjansson also has three holes remaining when play resumes on Tuesday. Meanwhile, Mateusz Gradecki (Oborniki Śląskie, Poland) posted a 3-over 75 (T46) in the opener, but like Kristjansson, the Buccaneer junior made a move in round two. Gradecki is 1-under with one hole left in the second round, placing him in a tie for 25th.

The Bucs – who were paired with Oregon State, Oregon and UNLV on Monday – will be grouped with the same teams to finish the tournament on Tuesday. Live scoring is available via Golfstat. Click here to access live scoring. Full recaps with scores will be available on ETSUBucs.com following each round.