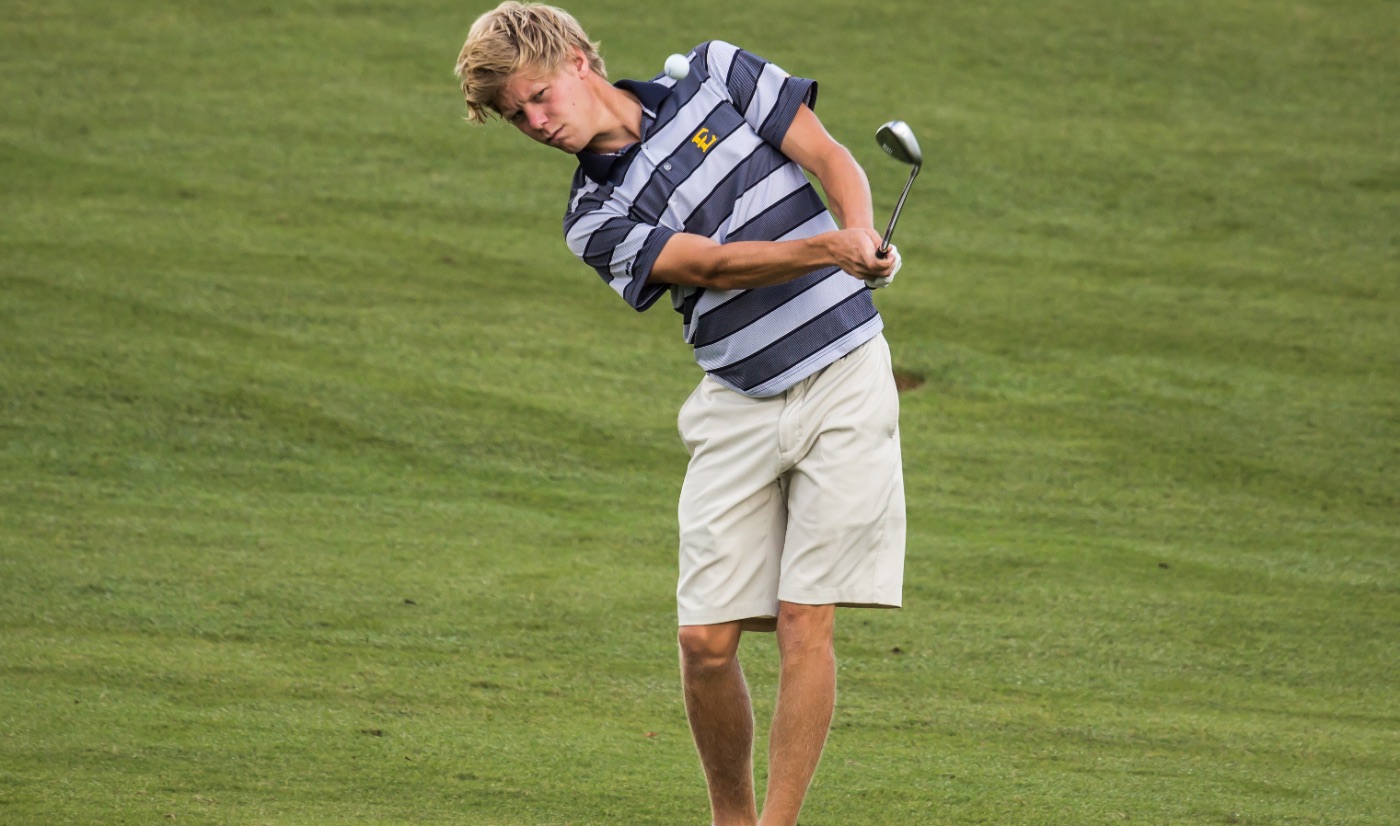 WHITE SULPHUR SPRINGS, W. Va. (April 10, 2016) – With three golfers in the top-11 – including senior Gudmundur Kristjansson (Reykjavik, Iceland) being tied for the lead – the ETSU men’s golf team sits atop the leaderboard following the first two rounds of the Greenbrier Invitational, which got underway on Monday at The Old White TPC Course.

Kristjansson is tied for the individual lead with Western Kentucky’s Stuart Easton at 2-under-par 138. The Buccaneer senior was one of three golfers to earn medalist honors last year and used a strong second round performance to climb up the leaderboard on Monday. Kristjansson was tied for eighth following an opening round score of even-par 70, but the reigning tournament champion recorded the lowest second round score (2-under 68) to propel his way into the lead. Kristjansson parred the first eight holes to begin the afternoon round but birdied three of his final four holes to finish the day with the 68 – tying his lowest round of the season.

Peyton White (Ohio) and Seth Sweet (Old Dominion) are both tied for third at 1-under-par 139. Towson’s Ryan Siegler tied Kristjansson for the lowest second round score with the 68.

Following the second round, Kristjansson talked about his overall play and what the approach will be heading into Tuesday’s final round.

“It feels good to be atop the leaderboard both as a team and individual,” said Kristjansson, who started on hole No. 2 in both rounds on Monday. “I was pretty solid from tee to green today, but I didn’t starting making a lot of putts until the last 10 holes of the second round. I hit good wedge shots on No. 16 and No. 1, while I hit an 8-iron on No. 18 that landed four feet from the hole. Those shots down the stretch made it easy for me to get some short birdies.

“Overall, I think we could have played better as a team, but it’s still nice to be on top. We want to play well tomorrow and hopefully can defend our title.”

Meronk was tied for the lead at 3-under 67 after 18 holes, but the Buccaneer All-American shot a 4-over in the second round moving him into fifth at 1-over-par 141. The Wroclaw, Poland native had six birdies in the opening round (three straight from No. 16-18); however in the afternoon, Meronk totaled three birdies, five bogeys and a double-bogey en route to ending with the 74 – his highest score of the spring.

Meanwhile, Kim is tied for 11th at 3-over-par 143 (71-72) and Ratliff is tied for 21st at 5-over-par 145 (74-71). Kim registered four birdies, nine pars and five bogeys in round one, and came back with 16 pars and two bogeys in the second round. Ratliff finished his day on a positive note as he posted three birdies over a seven-hole stretch on the back nine to get back to even before carding a bogey on the 36th hole to finish with the 71.

Afterwards, Kim talked about how he was strong with his irons, and didn’t miss many fairways and greens.

“It’s nice to see our team in first as well as having Gudmundur be in the lead,” said Kim. “Like Gudmundur said, I think we could’ve played better as team – especially with our putting.

“I was really strong with my irons today. I didn’t miss many fairways and hit many greens. I had a lot of birdie chances inside 15 feet, but missed a lot of those chances. Hopefully I can improve on that tomorrow and help contribute to a team win.”

Tuesday’s final round begins with another shotgun start at 9 a.m. ETSU is grouped with Western Kentucky and Eastern Kentucky, and tee off from No. 1-3.