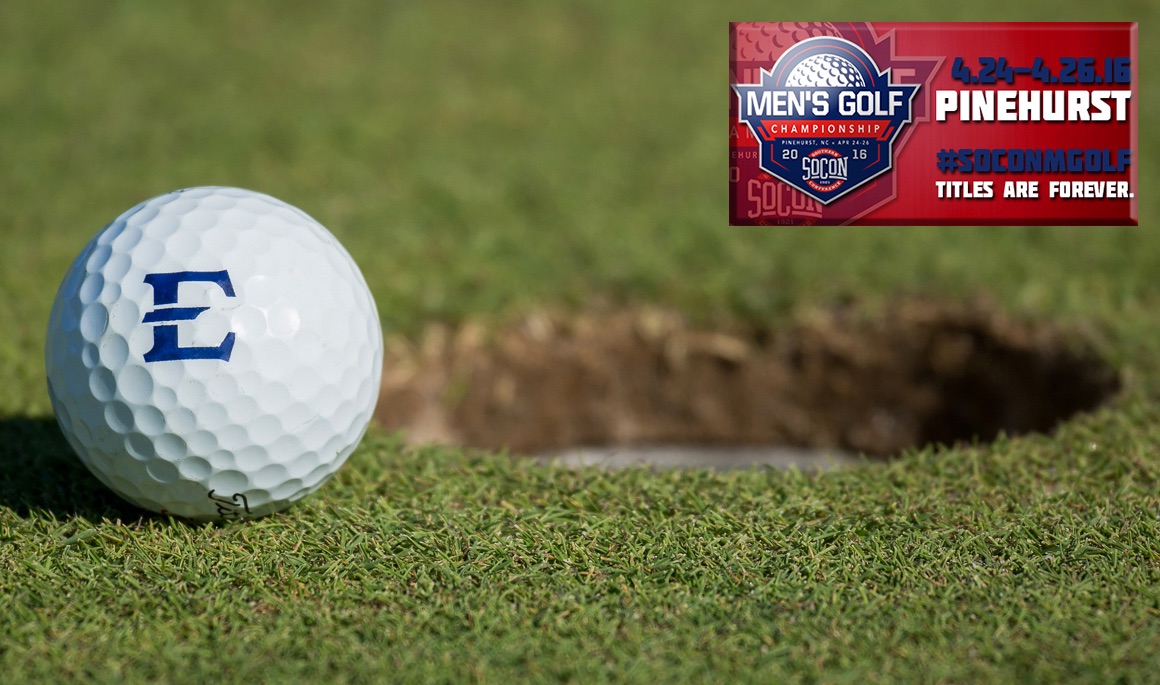 PINEHURST, N.C. (April 23, 2016) – The ETSU men’s golf team begins defense of its Southern Conference title this weekend as the conference championship gets underway Sunday morning at Pinehurst. The Bucs, who have claimed titles in their last two SoCon Championship appearances, are in search of their league-leading 19th SoCon title and 24th conference championship in program history.

The three-day, 54-hole tournament will be held at Pinehurst No. 9. This will be the third straight year the tournament is played at the par-72, 7,091-yard Jack Nicklaus Signature course.

ETSU has posted five top-5 finishes this year and enters the tournament ranked No. 56 in the Golfstat rankings.

The Blue and Gold – who won at the Greenbrier Invitational two weeks ago – are coming off a fourth-place finish at last weekend’s Wolfpack Spring Intercollegiate … ETSU has recorded at least one tournament victory in each of the last four years and 10 of the last 12 seasons.

Senior Adrian Meronk (Wroclaw, Poland) – the reigning SoCon Player of the Year – is coming off back-to-back runner-up finishes and moved to No. 17 in the Golfstat ranks … Meronk captured three of the nine possible SoCon Golfer of the Week honors this season … The Buccaneer All-American has finished in the top-10 in nine of his last 10 tournaments, while posting top-3 finishes in four of his last five outings … Meronk registered the lowest 54-hole score of his collegiate career last weekend in Raleigh as he fired a 13-under-par 200 … The Wroclaw, Poland native capped off the tournament by shooting his lowest collegiate round – a 6-under 65 … Meronk earned medalist honors at the Bank of Tennessee Intercollegiate in October.

Senior Gudmundur Kristjansson (Reykjavik, Iceland) has registered a pair of top-5 finishes this season as he placed third at the Inverness Intercollegiate in September and tied for third at the Greenbrier Invitational on April 12 … Kristjansson has two tournament wins in his collegiate career and made an appearance in the 2015 NCAA Championship … The Buccaneer senior is second on the team in scoring average (73.03).

Junior Mateusz Gradecki (Oborniki Slaskie, Poland) has played in all 11 tournaments this season for the Bucs and led the Blue and Gold at the Mason Rudolph Championship earlier this month … Gradecki tied for seventh at the Vanderbilt Legends Course.

Freshman Geuntae Kim (Daegu, South Korea) and sophomore Cayman Ratliff (Kingsport, Tenn.) both recorded their best collegiate finishes at the Greenbrier Invitational … Kim tied for ninth at 4-over-par 214 (71-72-71) and Ratliff tied for 15 at 5-over-par 215 (74-71-70) … Kim has played in ETSU’s last tournaments, while Ratliff has appeared in the Bucs’ last five tournaments.

The three-day, 54-hole tournament will be held at Pinehurst No. 9 ... This will be the third straight year the tournament is played at the par-72, 7,091-yard Jack Nicklaus Signature course.

The tournament tees off with twosomes at 7:30 a.m. Sunday.

Eight SoCon teams will be competing for the league title and an automatic bid to the NCAA regionals … The individual medalist will also earn an automatic regional qualification if he is not on the winning team.

ETSU won its record 18th SoCon title in 2015, its first season back in the league after a nine-year absence, downing UNCG in a sudden-death playoff after the squads were tied at 2-under-par 862 after three rounds.

With the graduation of two-time winner J.T. Poston of Western Carolina, this season will see a new individual medalist crowned … Poston topped Meronk in another exciting finish last year, downing the Palmer Cup player with a birdie on the first playoff hole as the two finished regulation tied at 9-under 207.

Six players that finished in the top 10 at last year’s SoCon Championship are in the 2016 field ... Meronk is joined by UNCG’s McGlone (third), Gradecki and Chattanooga’s Gosselin (tied for fifth), and Furman’s Preston Cole and Wehman Hopke (tied for ninth).

To go with ETSU’s 18 SoCon titles, Furman owns 13, its last coming in 2010, while Chattanooga is the only other current member to boast a title, as the Mocs have six to their credit, most recently in 2012 and 2013.

Three SoCon teams enter this year’s tournament ranked in the top 100 nationally by Golfstat, with ETSU leading the way at No. 56 ... UNCG follows at No. 78 and Chattanooga, which finished third at last year’s event, checks in at No. 93 ... Furman and Wofford are just outside the top 100 at Nos. 106 and 108, respectively.

Meronk enters this year’s tournament with a stroke average of 70.67 and ranked No. 17 nationally ... The senior from Wroclaw, Poland, is the only SoCon player ranked in the top 100.

Chattanooga’s Wes Gosselin brings a rank of 140 into the tournament and is fourth in the league with a 72.19 stroke average this year ... The Wofford duo of Andrew Novak and Jeremy Grab are also individuals to keep an eye on this week … Novak is ranked No. 150 and leads the SoCon with a 70.53 stroke average and Grab is third in stroke average at 71.73.

Meronk, Kristjansson, Gradecki, Ratliff and Kim make up the Blue and Gold lineup this week at Pinehurst.