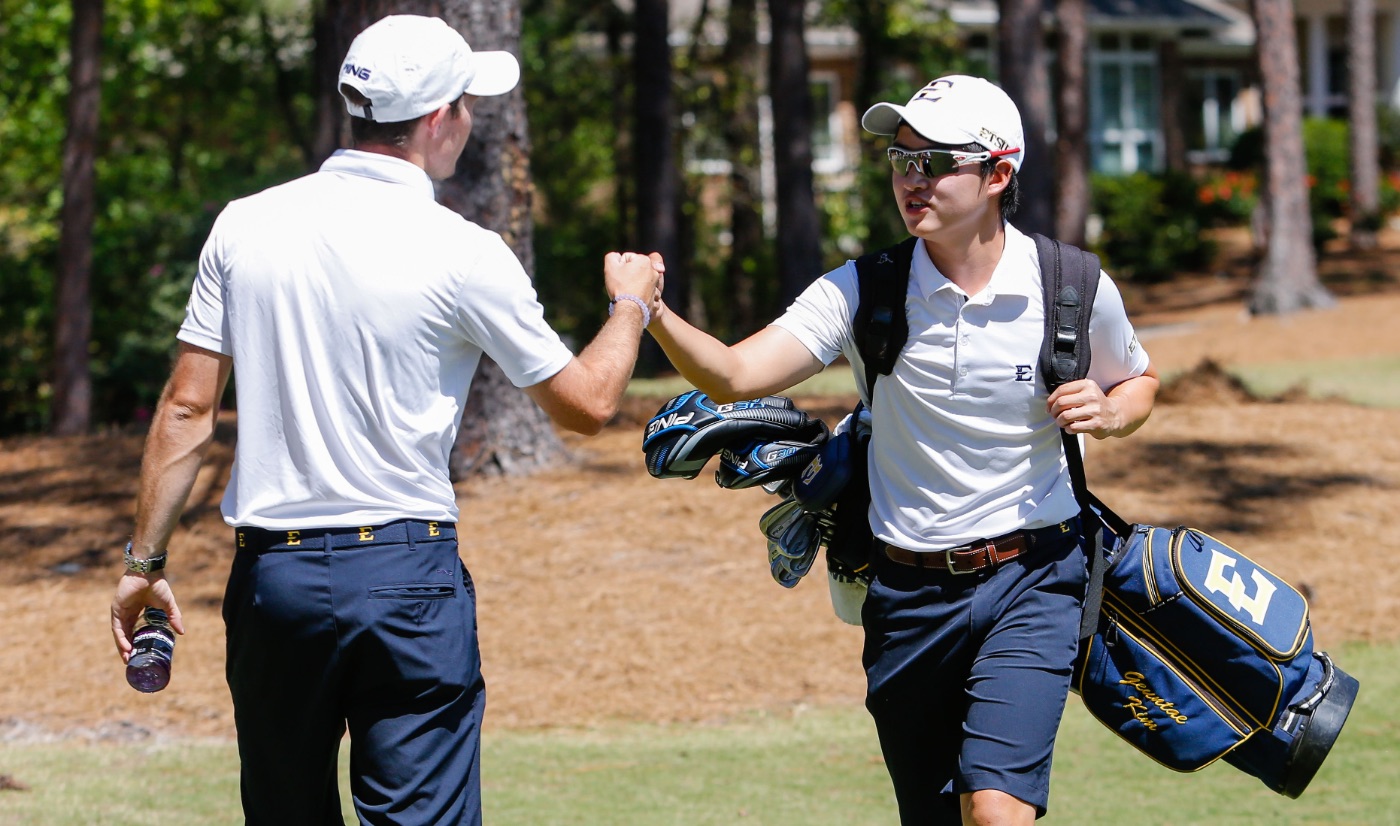 Cayman Ratliff (left) gives Geuntae Kim (right) a fist bump after first round play on Sunday at Pinehurst.
ETSU in the lead after round one of SoCon Championship
Related Links

Gradecki, Kim lead Bucs on day one at Pinehurst

The Bucs, who are the defending champion and searching for their SoCon-leading 19th title, were the only team to finish with a score below par in round one. ETSU carded a 1-under-par 287 and holds a three-shot lead heading into second round play on Monday.

Overall, the Blue and Gold registered a tournament-best 20 birdies on Sunday and led the eight-team field in par-3 and par-4 scoring. ETSU played the four par-3s at 2-under-par and the 10 par-4s at 1-over-par, while the nearest team on the par-3s was UNCG (even-par) and Furman was the second-best team on the par-4s at 6-over.

At the end of the round, head coach Fred Warren talked about the strong play from Gradecki and Kim, while having his team’s positive play outweigh some miscues on the par-5s.

“I thought we played well in stretches today and made a lot of birdies, but we also made some mistakes on the par-5s,” said Warren, whose team also held a three-shot lead after round one last year. “To have those mistakes and still be in the lead is encouraging. Overall, our good play was able to outweigh the mistakes we had.

“Mateusz has been really working hard and I was pleased to see him play well today. Geuntae was very solid the entire round, and for a freshman, that is very impressive. Cayman (Ratliff) also came back after some bad holes on the par-5s to give us a countable score. Adrian struggled a little bit coming in but he’s a great player.”

Gradecki paced the Bucs on day one as he totaled six birdies – four on the back nine – en route to firing a 2-under 70, while Kim is one shot back after finishing at 1-under 71. Kim got off to a strong start at his first conference championship as he birdied two of his first five holes and leads the field in par-4 scoring at 3-under. Meanwhile, Gradecki’s six birdies in the opening round were tied for the most in first round action.

Gradecki was pleased with the solid start but he knows he left a few shots out there in round one.

“I was very up and down today. I hit a lot of good shots that set up all those birdie chances, but I also had some poor shots,” said Gradecki, who bogeyed his final two holes. “I managed to make up for some of the bad shots, but couldn’t correct it on some of the holes. I can’t be that disappointed with the 70, but my score could’ve been much better.”

“As far as the team goes, this is a good start for us. We all played well in spurts today. Everyone is around par, so it was a good team effort.”

Meanwhile, Kim felt comfortable on the course and was excited to help contribute to the team score in his first-ever conference tournament.

“This is a really great experience to be playing in the conference championship. One of my goals was to be playing with the team at conference and I’m very grateful to be here this weekend,” Kim said. “I hit most of my shots pretty well today, but I had some rough holes on the par-5s. I felt my score could’ve been three strokes lower if it weren’t for those mistakes.

Kim also stressed the course and his putting game helped him on Sunday.

"I really like the course as it suits my game," said Kim. "I am not a long hitter and it forces me to hit accurate shots with the narrow fairways. My putting helped me out today and I am glad I was able to contribute to the team score.”

Wofford’s Jeremy Grab joined Gradecki with the six birdies and holds the 18-hole lead at 4-under 68, while UNCG’s Luke Haithcock is one shot back at 3-under 69. Gradecki is tied for third with Furman’s Bryce Howell and Kim is tied for fifth with Chattanooga’s Kory Webb.

In total, 11 golfers finished with a score of par or better on Sunday, including senior and reigning SoCon Player of the Year Adrian Meronk (Wroclaw, Poland). Meronk – who was 3-under thru 12 – finished the round tied for seventh at even-par 72.

Senior Gudmundur Kristjansson (Reykjavik, Iceland) and sophomore Cayman Ratliff (Kingsport, Tenn.) are both tied for 13th at 2-over-par 74. Ratliff finished strong as he birdied three of his last five holes and posted five of ETSU’s 20 birdies in the round.

Second round play gets underway Monday at 8 a.m., while ETSU doesn’t tee off until 10:15. The Bucs will be grouped with Furman.