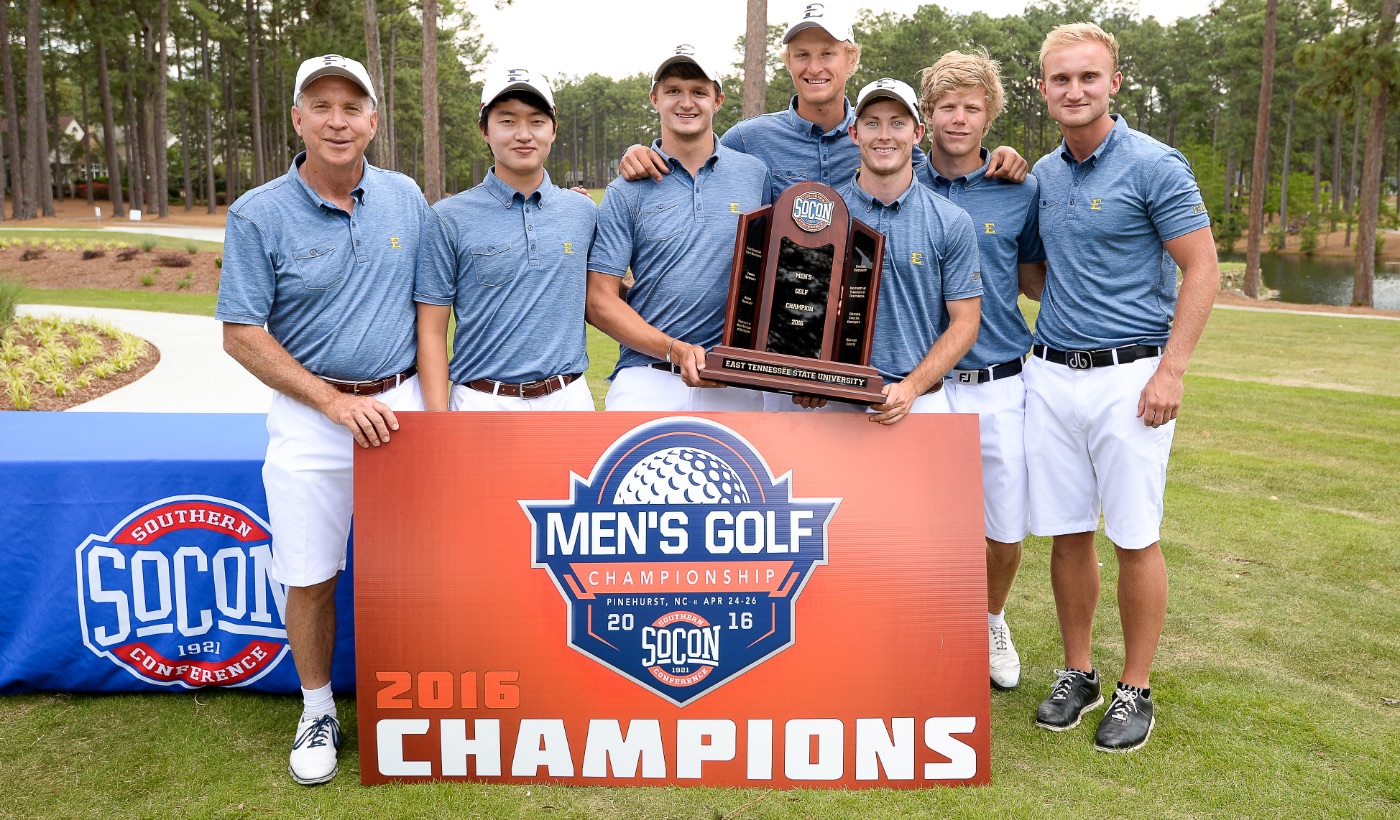 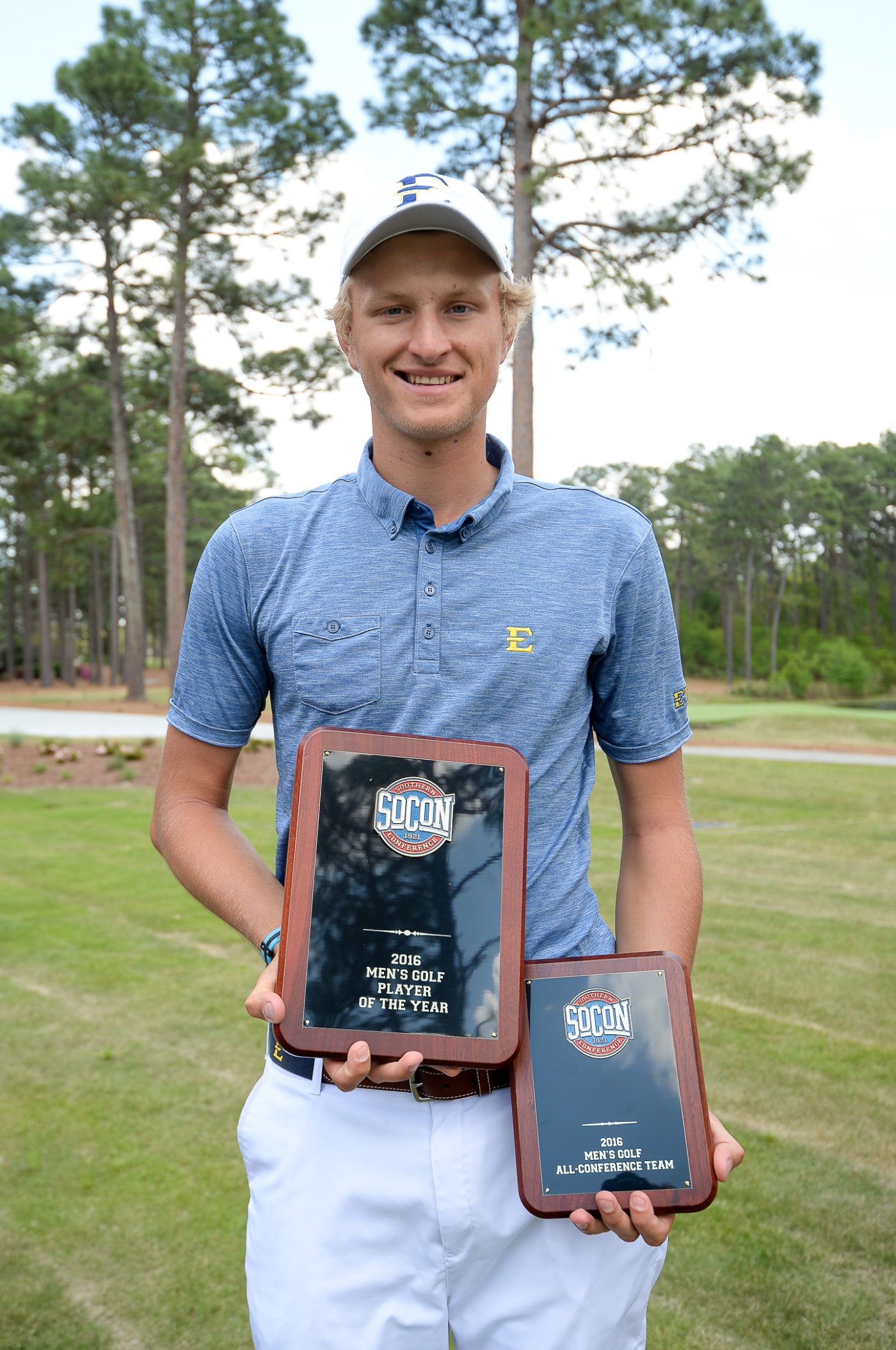 Meronk earns medalist honors to cap off the SoCon sweep

PINEHURST, N.C. (April 26, 2016) – For a second straight year the Southern Conference men’s golf championship came down to the wire. After ETSU defeated UNCG in a playoff a year ago, the two teams were standing on the 18th green waiting to see who would be crowned champions.

With the Spartans in the clubhouse and trailing the Bucs by one stroke, all eyes were on senior Adrian Meronk (Wroclaw, Poland) as he walked up to the 54th hole. The Buccaneer All-American needed to two-putt from 35-feet out and he did just that, as Meronk made par to clinch the championship en route to delivering the Bucs their SoCon-leading 19th conference title on Tuesday afternoon at Pinehurst No. 9. The putt not only solidified the team title, but it moved Meronk past Wofford’s Jeremy Grab for medalist honors after the Terrier junior bogeyed the final hole giving the 17th-ranked player the one-shot victory.

ETSU – who was trailing Wofford by one stroke to begin the day – shot an 11-over 299 on Tuesday and finished the championship at 12-over-par 876 (287-290-299) at the Jack Nicklaus Signature course. UNCG earned runner-up honors after totaling a 13-over-par 877 (295-286-296), while Furman (+15), Chattanooga (+18) and Wofford (+20) rounded out the top-5, respectively. The five teams started the morning within 10 shots of each other – and during the back nine the groups all pulled within three – but thanks to strong play by ETSU’s upperclassmen down the stretch, the Bucs were able to bring the title back to Johnson City for a second consecutive season.

At the conclusion of the tournament, Coach Warren knew the seven collective birdies on the back nine by Meronk, Gudmundur Kristjansson (Reykjavik, Iceland) and Mateusz Gradecki (Oborniki Slaskie, Poland) helped keep his team atop the leaderboard.

“It was a hard-fought win and everyone contributed to this championship,” said Warren, who claimed his 11th Coach of the Year honor at the awards ceremony. “Today was a crazy day. We left some shots out there on the first two days and I was hoping it wasn’t going to cost us. We threw some more away today in the final round, but fortunately, Adrian, Gudmundur and Mateusz brought it in strong for us. I am really proud of the guys and it’s great to get the win.”

Meronk trailed by four shots after round one and by two heading into the final round, but overcame the deficits to earn medalist honors. The Wroclaw, Poland native carded back-to-back 3-under-par 69s to finish 6-under-par 210 for the tournament. The win marked his fifth collegiate victory, tying him with Garrett Willis and Seamus Power for second all-time in program history. Meronk is the 12th Buccaneer to win an individual SoCon title and the 21st conference tournament medalist in program history.

Meronk got things rolling midway through the round on Tuesday as he missed a birdie attempt on No. 6 and walked away with a bogey on No. 7, but the two-time SoCon Player of the Year refocused and finished strong. Meronk played the last 11 holes at 3-under and moved within a shot of Grab for the lead after carding a birdie on the par-4, 442-yard No. 13. From there, both golfers – who were paired together – parred the next four holes and Meronk rallied for the win after Grab went double bogey on the par-4, 460-yard No. 18. Grab hit his drive out-of-bounds and was forced to hit a provisional resulting in him carding a six on the final hole of the championship. For the tournament, Meronk recorded a score of par or better on 49 of his 54 holes played.

“It feels good to get both the team win and medalist honors, especially with this being my senior year,” said Meronk, who was named SoCon Player of the Year for the second straight season. “I want to congratulate the guys for their hard work and playing well. It’s exciting to be going to Regionals again, and hopefully we can make it to Nationals. That was our goal when the season began and we still have a chance to get there.

“Today’s round was much last yesterday’s. My long game was working but I was still missing some putts. It was a little disappointing, but overall it was enough and I am happy to get the win.”

Following the tournament, Kristjansson and Gradecki talked about playing well down the stretch and building on this win as they gear up for Regionals.

“It’s always fun to win – especially conference,” added Kristjansson. “This win helps get us to our next destination – which is Regionals – and it’s nice to secure a spot in that field. Obviously, Adrian played well and he carried us this week. I didn’t play particularly well, but it was great to come back and make some key shots on the back nine. Tom (Heggarty) told me on the back nine that the team needed a big finish from me and the other guys. I didn’t do anything incredible on the back; I was just simple and efficient. I am glad I was able to make some birdies and help get the team another championship.”

“Winning the championship means a lot and we really wanted to defend the title,” added Gradecki, who led the tournament field in par-4 scoring and tied for the team lead with 11 birdies. “It was very close as it came down to the last hole, but we were happy to win by one (shot). We didn’t want it to be that close but it’s exciting to get the win. We had some experience with Gudmundur, Adrian and myself from last year, so we knew what to do during the last few holes. We stayed in there and finished strong to help the team. The experience from last year definitely helped.”

Kristjansson joined Meronk on the all-conference team, while Geuntae Kim (Daegu, South Korea) was placed on the all-freshman team. Meronk also earned SoCon Player of the Year honors for the second straight season, becoming just the sixth player in conference history to become a two-time winner.

After playing four tournaments this month – two resulting in wins – Meronk said he and the team are looking forward to getting back to campus to finish up final exams before preparing for Regionals.

“We have to get back to campus and finish up with final exams before going out and preparing for Regionals,” said Meronk. “It’ll be good to take some time off and reenergize before starting NCAA Regionals in May.”

The Bucs learn their NCAA Regional destination on Thursday, May 5 at 9:30 a.m., on Golf Channel’s Morning Drive. The regionals will be held May 16-18.