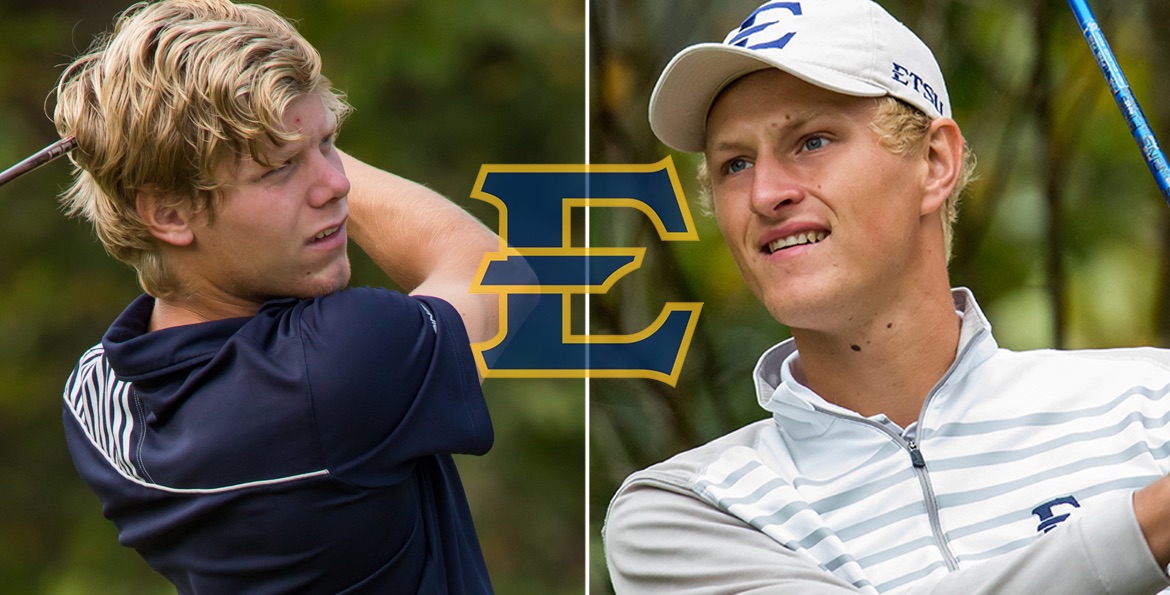 KOHLER, Wis. (May 18, 2016) – Seniors Gudmundur Kristjansson (Reykjavik, Iceland) and Adrian Meronk (Wroclaw, Poland) wrapped up their collegiate careers with top-10 finishes, while the ETSU men’s golf team finished tied for seventh as the final round of the NCAA Regional concluded on Wednesday at Blackwolf Run Meadow Valleys Course in Kohler, Wis.

Kristjansson and Meronk both went low on Wednesday as they both fired a 4-under 68, but it wasn’t enough to push the Bucs onto the NCAA Championship. The top five teams from each regional qualified.

ETSU – who began the day tied for eighth and six shots back from the fifth-place team – carded a 7-under 281 in the final round. Unfortunately, the Blue and Gold were unable to inch closer to the cut line as Baylor and No. 10 Florida State claimed the final two spots after they tied for fourth at 6-under-par 858. Like the Bucs, Baylor began the day behind the cut line, but the 28th-ranked Bears went low in the final round by firing a 14-under 274.

Top seed and fourth-ranked Illinois rallied to win the regional as the Fighting Illini shot a 7-under 281 to leap seventh-ranked Florida. Illinois finished the regional at 11-under-par 853 (289-283-281), while Florida – who posted a 4-over 292 on Wednesday – finished tied for second with No. 21 Arkansas at 7-under-par 857.

For the second straight year, Kristjansson finished in the top-10 at the NCAA Regional as he was one of five golfers to tie for fifth at 3-under-par 213 (74-71-68). Kristjansson – a 2015 NCAA Championship qualifier – was nearly flawless on Wednesday. The All-SoCon selection parred his first eight holes before birdying five of the next nine to move to 5-under for the round. However, the Reykjavik, Iceland native bogeyed his final hole resulting in the 68. For the tournament, Kristjansson scored par or better on 46 of his 54 holes (35 pars and 11 birdies).

Despite tying for the most birdies in the regional with 17, Meronk couldn’t overcome the two double-bogeys (one on Monday and one Tuesday) along with Monday’s triple-bogey to try and capture a sixth collegiate win. In the end, the two-time SoCon Player of the Year finished tied for 10th at 2-under-par 214 (73-73-68). Meronk, the 15th-ranked golfer, registered seven birdies in the final round to propel him 18 spots up the leaderboard, but neither he or Kristjansson could catch Ohio State’s Tee-k Kelly for medalist honors.

Kelly – who was playing as an individual – won the regional after finishing with a 54-hole score of 7-under-par 209 (70-70-69) and defeated 36-hole leader Alejandro Tosti (Florida) by one stroke.

Freshman Geuntae Kim (Daegu, South Korea) gave the Bucs a solid effort in his first-ever regional as he finished 34th at 2-over-par 218 (73-75-70). Kim finished strong as he shot a 2-under 70 in the final round, which tied his lowest collegiate score. The SoCon All-Freshman Team member played the final 12 holes at 3-under to register the 70, while four of his 11 birdies were posted on Wednesday.

The top five teams and the top individual from a non-advancing team qualified for the NCAA Championship.