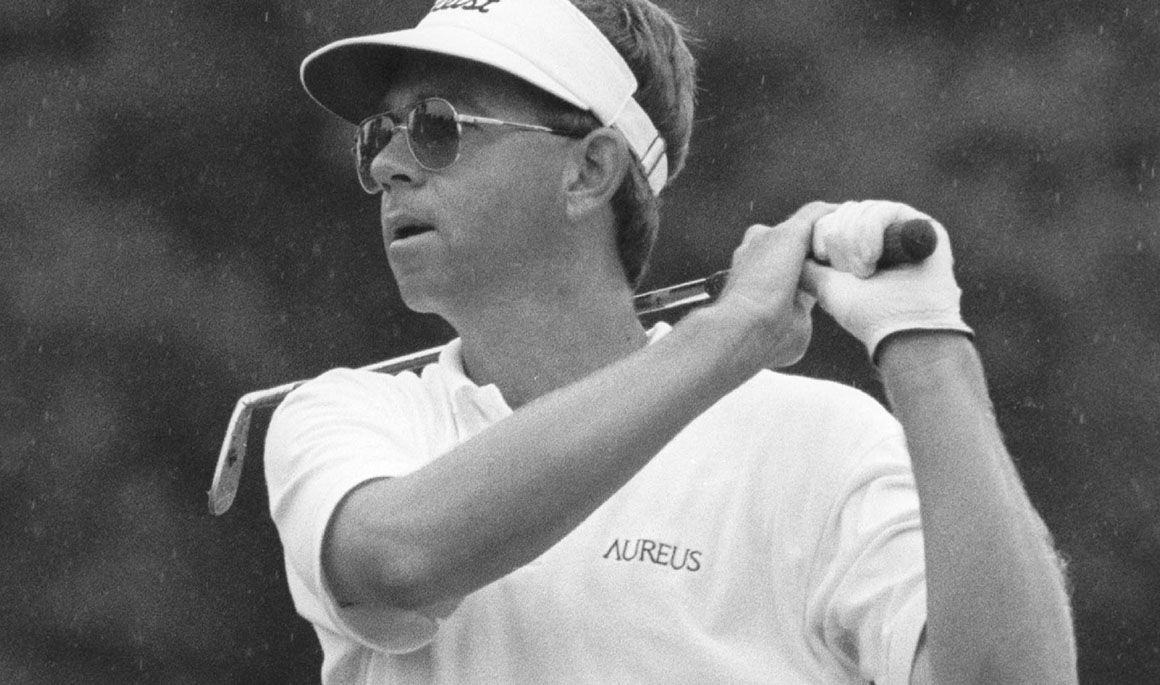 Mike Hulbert, above, is pictured during his playing days on the PGA Tour. Hulbert earned All American honors at ETSU and was the Southern Conference champion in 1980.
ETSU alumni Mike Hulbert recalls Ryder Cup experience
Related Links

JOHNSON CITY, Tenn. (Sept. 28, 2016) – As the best golfers in the United States and Europe prepare for the Ryder Cup later this week at Hazeltine National Golf Club in Chaska, Minn., one former ETSU men’s golfer has a unique understanding and perspective of what it means to participate in one of the world’s great golfing traditions.

All American Mike Hulbert – who won a Southern Conference title in 1980 before moving on to a professional career that saw him win three times on the PGA Tour – has twice been named as an assistant captain for the United States at the Ryder Cup. His first opportunity to serve in the role came in 2002 for team captain Curtis Strange, and he was later asked to provide the same support to captain Davis Love III in 2012.

“To be named and be a part of it in any way is just special, because it’s one of the biggest events on the planet,” said Hulbert, who was inducted into the ETSU Athletics Hall of Fame in 2002 and finished his career with over $4.7 million in career earnings. “To be part of it twice, it was amazing. Even now, if they asked me to be a water boy or sandwich guy, just to be a part of it would be tremendous. It’s a unique honor and certainly right up there with the greatest experiences in my career.”

Hulbert, who won PGA events at the Federal Express St. Jude Classic in 1986, the B.C. Open in 1989 and the Anheuser-Busch Golf Classic in 1991, also enjoyed two Top 10 efforts in major championships by finishing tied for sixth at the 1992 U.S. Open and tying for seventh at the 1986 PGA Championship.

Despite those successes, it was the phone calls from Strange and Love III that truly left him speechless.

“Curtis and I are really good friends, and when he called to ask me he basically just told me I was doing it,” Hulbert said with a laugh. “But he didn’t even have to ask. Of course I was going to say yes. Anyone would.

“When (Curtis) called me the first time he said, ‘What are you doing?’ He said, ‘Here’s the deal. I can’t think of anyone else I want for an assistant next year. You know all the players and they all love you. You are so well liked, and I think you are the right man for it.’ So I didn’t say anything for about 10 seconds because I couldn’t breathe. I had no idea it was going to happen. I said sure, are you kidding me. That was probably the highest honor anyone could get.”

Turns out, Hulbert and the rest of the team had to wait for their opportunity to play in the Ryder Cup. That group was originally scheduled to play in 2001, but because of the terrorist attacks in New York, Washington, D.C., and the Pennsylvania countryside, the event was postponed and moved to 2002.

“It was supposed to be in 2001, but then it shifted and was bumped up a year,” Hulbert said. “That was hard, but the team stayed assembled. They didn’t change the team even though another year passed. There were probably some other players that were playing better a year later, but it didn’t matter. That was the right thing to do.”

Hulbert, whose son Trevor is currently on the Bucs’ men’s golf roster, said the biggest challenge for the captain and assistant captains at the Ryder Cup is simply developing the pairing strategy. Who will play on which days and at what time?

When balancing the confidence – and egos – of the best players in the world, this is not an easy task.

“One of the hardest things is on the first two days you play four matches both in the morning and afternoon, so that means you have to sit four of your guys over a total of 16 matches at the start,” Hulbert said. “You have 12 of the best players in the world on your team and they all deserve to play, but some guys have to sit. For example, it’s hard having to go up to a player like Brandt Snedeker and saying you may not play until Saturday. That’s tough.”

While matching up the right players and thinking strategically on Friday and Saturday are a challenge, the singles matches on Sunday – when players are paired one-on-one against the best from Europe – is a different matter. Describing it as “the most important day of the week,” Hulbert said in his mind the strategy on Sunday is rather straight forward.

“A lot of people try to make a big deal out of that but personally I think you can draw them out of a hat, instead of being very strategic and trying things like front-loading and all that stuff,” Hulbert said.

While the work is important, it’s moments with the players and sharing the stories of those weekends in 2002 and 2012 that make Hulbert smile.

Back in 2002, it was the memory of Phil Mickelson getting up in front of all the players, captains, assistant captains and their families at a Saturday evening banquet and talking about the opportunity to play alongside David Toms. Mickelson joked about how watching Toms play showed him how much better he needed to be driving the golf ball. These were in the days before he had won a major championship. He must have paid attention, because since that event, Mickelson has won six majors.

Or in 2012, when it was Mickelson that convinced Love III, Hulbert and fellow assistant captain Fred Couples that he and Keegan Bradley needed to be paired together and play early in the event to set a tone because they both were playing so well. Mickelson’s suggestion proved true as the duo dominated the Europeans on the first two days of the event, even besting a team of Graeme McDowell and rising star Rory McIlroy.

In the end, Hulbert said it’s the memories and the experiences that make the Ryder Cup so special. It is a unique event where the best in the world come together to play for their country, and that makes it all the more special.

This time around, Hulbert has a simple message for the U.S. team.

“We just need to stinking win,” said Hulbert, referring to the fact that the Americans have only one victory in the event since 2002. “The Europeans are good, but I’m still confident that we can win it.”