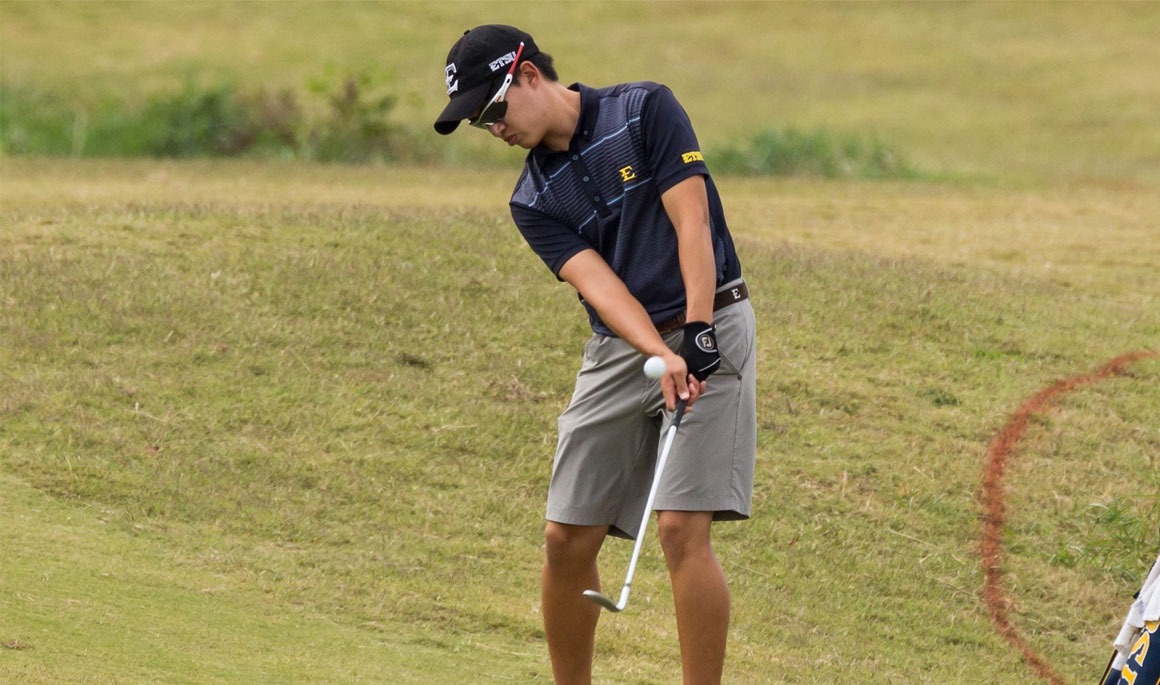 Sophomore Geuntae Kim chipping in for eagle on No. 8.
Bucs off to strong start at Bank of Tennessee Intercollegiate
Related Links

Gradecki, Kim and Burns sit in top-15 after day one at Blackthorn Club

Kim – who posted his lowest collegiate round with a 3-under-par 69 – chipped in for eagle on the par-5, 534-yard No. 8, and the Buccaneers used that momentum to showcase a strong start in the opening round of the Bank of Tennessee Intercollegiate, which got underway Friday at the Blackthorn Club in Jonesborough.

As group, ETSU generated its move on the back nine and sits in fourth-place at 7-under-par 281 after round one. Overall, the Bucs registered 14 of their 18 birdies after making the turn – including eight over a three-hole stretch on No. 10, 11 and 12.

“I am very proud of our effort today. We hung in there and turned in a solid round,” said head coach Fred Warren. “This is a strong field and there are a lot of good players here this weekend. Overall, I am proud of the guys. We played well today.”

Senior Mateusz Gradecki (Oborniki Slaskie, Poland) paced the Bucs as he carded a 4-under 68, placing him in a tie for sixth. The 68 tied Gradecki’s lowest collegiate round, which he has now done three times in his career. Gradecki totaled five birdies, 12 pars and one bogey in his opening round. The lone Buccaneer senior finished the day with back-to-back birdies – including an impressive 40-foot putt to end his round on No. 18.

“I finished strong. I had a par and two birdies on the last three holes, and it felt good to end the round with that long putt on No. 18,” said Gradecki. I really didn’t know how everyone else was doing until I talked to Geuntae and Kevin (Burns) after the round. Once I heard their scores, I knew we must have been doing pretty well. We just tried to play our best today and it felt good to contribute with a low score.”

Meanwhile, Kim is right behind his teammate in a four-way tie for 10th at 3-under. Prior to his eagle on No. 8, the Buccaneer sophomore birdied the par-3, 188-yard No. 7 and that positive mojo carried over to the back nine. After the turn, Kim and freshman teammate Kevin Burns (Canton, Ga.) birdied their first three holes to charge up the leaderboard. In the end, Kim birdied four of his first five holes on the back nine en route to finishing with his lowest collegiate round.

“It felt good to finish with my lowest collegiate score. To be able to do that at our tournament makes it feel even better,” Kim said. “I wasn’t playing well early, but then I made eagle on No. 8 and it put me back at even-par. That shot helped turn things around. I still had some bad shots but was able to make up for those with some birdies. Overall, my short game was pretty good and I was confident in my putting.”

Burns also registered his best score in his young college career as the Canton, Ga. native is tied for 14th at 2-under 70. Burns had eight pars and one bogey on the front nine, but quickly made a move with his three consecutive birdies on No. 10, 11 and 12.

Afterwards, Burns talked about his flurry of birdies on the back nine.

“I stuck a close shot on No. 10, and I missed a few putts earlier, so it was nice to have a tap in for birdie. That hole kind of got things rolling for me,” said Burns. “When I got to No. 11, I had a lot more confidence and was able to sink a 15-foot birdie putt. From there, things clicked and I had that drive going, which was exhilarating.”

Individually, UNCW’s Thomas Eldridge holds a one-stroke lead at 7-under-par 65. A group of three players are tied for second at 6-under-par 66.

Second round play gets underway Saturday morning at 8:30 a.m., while the Bucs tee off at 11. ETSU is paired with Louisville and VCU.

Live scoring for the tournament is be available via Golfstat.com. Full recaps with scores will be available on ETSUBucs.com after each day.