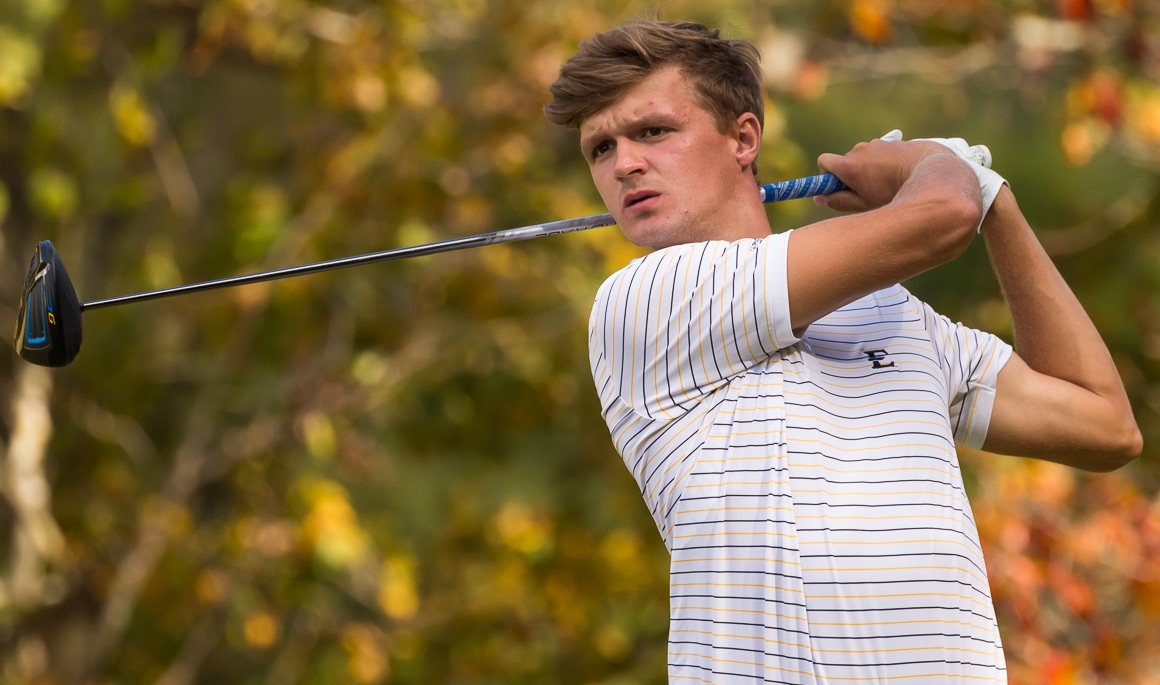 Making a final appearance in his home tournament, Gradecki birdied four of the last five holes in Sunday’s final round and earned runner up honors by totaling a 54-hole score of 11-under-par 205 (68-68-69) at the Blackthorn Club in Jonesborough. The 11-under is the third lowest 54-hole total in tournament history, which is also the same score former Buccaneer All-American Rhys Davies shot to earn medalist honors in 2005.

Gradecki – who posted his best collegiate tournament finish – opened the weekend with back-to-back rounds of 4-under-par 68, which tied his lowest rounds as a Buccaneer. Gradecki began Sunday’s round with two birdies on his first four holes, but then recorded a stretch of three consecutive bogeys on five, six and seven en route to moving to 1-over for the round. Following another bogey on the par-5 10th, Gradecki was sitting 2-over on the day and outside the top-10.

However, the lone Buccaneer senior stepped up his game and finished with a bang.

Gradecki’s run started with a birdie on the par-4 11th – and after carding back-to-back pars on No. 12 and 13 – the Oborniki Slaskie, Poland native answered the challenge with four more birdies to close out his round and finish in a three-way tie for second.

“It feels great. I finally played well in this tournament. I played well my freshman year, but it feels good to finish strong in my final tournament here,” said Gradecki, whose previous best finish at the Bank of Tennessee came in 2014 where he tied for 30th. “I played well all weekend. I just had some holes today where I hit it in the wrong spot and made bogeys. Play was tough today. We were forced to hit it in the right places and I didn’t do that on a few holes. I could’ve shot 7-under on the last seven holes. Instead, I shot 5-under. I was close to doing something very special.”

When asked about his strong putting down the stretch, Gradecki said that’s an aspect of his game he has been working on.

“I was very happy with my putting today,” Gradecki said. “I’ve been working hard on my putting recently. It hasn’t been the strongest part of my game over the last few months, but it was definitely strong this weekend. Hopefully I can carry this over into our next couple of tournaments, and continue to help the team.”

ETSU head coach Fred Warren was pleased with the way Gradecki played down the stretch in today’s final round.

“I am really proud of Mateusz,” said Warren. “He birdied four of his last five and those were some very tough holes. He started out well, then ran into a difficult stretch in the middle, but finished strong. This means a lot to him with it being his last tournament here. He puts a lot of pressure on himself and it was encouraging to see him play well this weekend.”

“We finished in the top-third of the tournament with a young team, so there are a lot of positives to take away from this weekend,” said Warren. “Today’s round was a little tougher. It wasn’t due to lack of talent; I just think our guys tried too hard. We were playing in the final group today and it was a good experience for our team. This should help us moving forward and I am proud of how the guys played this weekend. We still have some things to work on and I think our guys will learn from this.”

Freshmen Trevor Hulbert (Orlando, Fla.) and Zack Ford (Cochranton, Pa.) played as individuals this weekend for the Blue and Gold. Hulbert finished tied for 24th and Ford tied for 76th.

The Bucs now turn their attention to next weekend’s Golf Club of Georgia Collegiate, which begins Friday, Oct. 21.