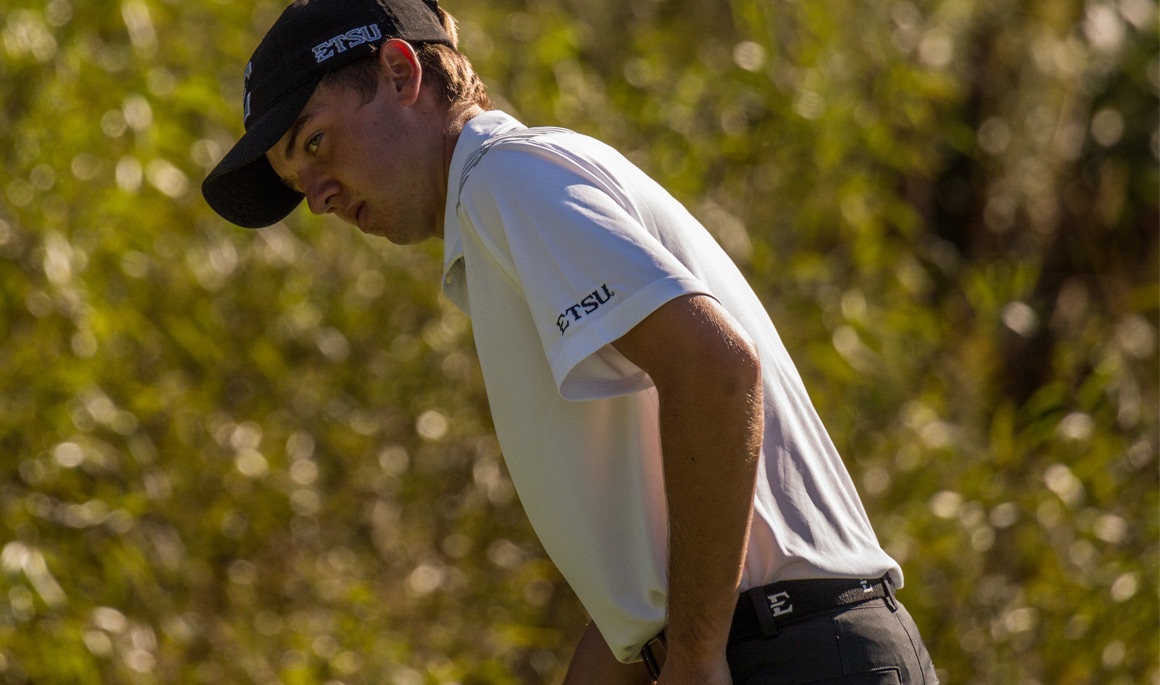 Freshman Trevor Hulbert tied his lowest collegiate round with a 69 on Friday.
Hulbert guides Bucs in round one of Schenkel Invitational
Related Links

Playing in his 21st collegiate round, Hulbert – who carded five birdies and 11 pars in first round play – is tied for ninth in the 81-man field featuring nine golfers ranked in the top-50. Hulbert tied his lowest collegiate round and is only three shots off the lead heading into Saturday’s second round. Hulbert played the first nine holes at 1-under, while collected three birdies over final five holes to end the day with his 69.

The field is chasing Lipscomb’s Dawson Armstrong as he totaled a 6-under-par 66, and holds a one shot lead over Iowa’s Raymond Knoll and Georgia Southern’s Brett Barron. A group of five golfers are tied for fourth at 4-under 68.

Overall, the Bucs are tied for eighth after round one at 4-under-par 284. ETSU – who is five shots off the lead – sits ahead of No. 36 North Florida and No. 41 Kentucky.

College of Charleston sits atop the leaderboard at 9-under-par 279. The Cougars lead tournament host Georgia Southern by one shot, while Iowa and No. 32 Lipscomb are tied for third at 7-under 281.

ETSU also picked up countable scores from senior Mateusz Gradecki (Oborniki Slaskie, Poland), freshman Zack Ford (Cochranton, Pa.) and sophomore Geuntae Kim (Daegu, South Korea) on Friday. Gradecki is tied for 16th at 2-under 70, while Ford shot an even-par 72 to be tied for 29th. Kim is tied for 37th at 1-over 73. Gradecki enjoyed a strong finish to his round as he was 1-over at the turn, but picked up three birdies and six pars over his last nine holes to end with the 70. Ford was up-and-down all afternoon as he totaled five birdies, eight pars and five bogeys; however, the Cochranton, Pa. native collected four of his birdies over his final nine holes.

The Bucs are paired with Jacksonville and UAB in Saturday’s second round play. ETSU tees off at 9 a.m.

Live scoring of the tournament is be available via Golfstat.com. Full recaps with scores will be available on ETSUBucs.com after each day.