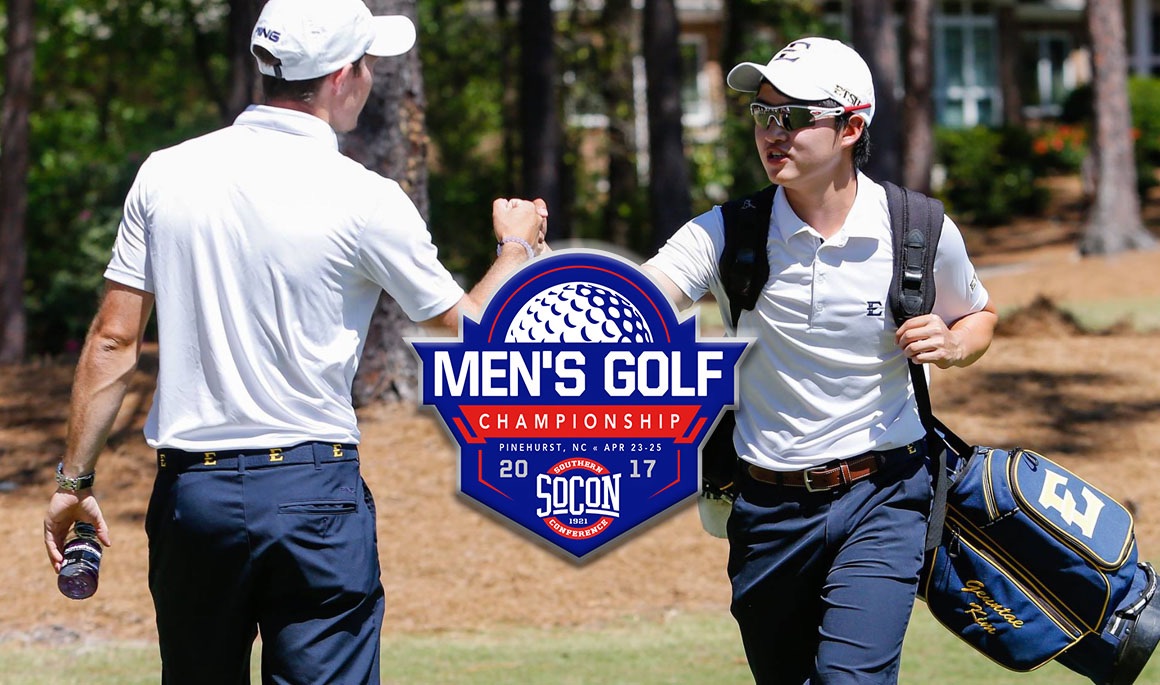 PINEHURST, N.C. (April 22, 2017) – Since returning to the Southern Conference in 2015, ETSU men’s golf has been the only team to hoist the conference championship trophy. The Buccaneers look to defend their title this weekend as the SoCon Championship gets underway Sunday morning at Pinehurst No. 9 in Pinehurst, N.C.

The Bucs have played in 10 tournaments this season with the most recent coming last weekend at the Wolfpack Spring Open … ETSU’s top finish on the year came at its home tournament where the Blue and Gold finished tied for fifth at the Bank of Tennessee Intercollegiate.

Senior Mateusz Gradecki (Oborniki Slaskie, Poland) has led the Blue and Gold this season as he enters the tournament with the second lowest scoring average in the SoCon at 71.69 … Gradecki is one of two Buccaneers to have played in all 10 tournaments this season, while he has turned in four top-10 finishes – including a pair of runner-up finishes … Gradecki has posted back-to-back top-five finishes at the SoCon Championship.

Freshman Trevor Hulbert (Orlando, Fla.) has also played in all 10 tournaments this season with his best finish coming at the Schenkel Invitational back on March 17-19, where he tied for 18th … Hulbert posted his lowest round last weekend when he fired a 68 in round two of the Wolfpack Spring Open at Lonnie Poole Golf Course.

Freshman Ben Reichert (East Amherst, N.Y.) has recorded the second lowest scoring average among SoCon freshman this season with a mark of 73.83 … Reichert finished tied for 10th in his second collegiate tournament back in October at The Macdonald Cup, while he has yet to play in a tournament since March 17-19.

Junior Cayman Ratliff (Kingsport, Tenn.) ranks 15th among SoCon golfers in scoring average this season … Ratliff – who has played in five tournaments this year – has a 73.71 average … Ratliff played in his first conference championship for the Bucs in 2016 as he finished tied for 30th.

Geuntae Kim (Daegu, South Korea) earned SoCon all-freshman team honors a year ago … Kim has played in nine of the 10 events this season, while he turned in his lowest collegiate round at the Bank of Tennessee Intercollegiate when he fired a 69 in the opening round … Like Ratliff, Kim is making his second appearance at Pinehurst as the Buccaneer sophomore finished tied for 32nd a year ago … Kim opened the tournament with a 71 last year.

The 2017 Southern Conference Men’s Golf Championship will be played Sunday through Tuesday at Pinehurst No. 9 in Pinehurst, North Carolina ... This will be the fourth straight year the tournament is played at the par-72, 7,118-yard Jack Nicklaus Signature course.

Due to the threat of inclement weather in Pinehurst on Monday, the schedule has been altered. The teams will attempt to play 36 holes on Sunday, starting at 8 a.m. and going off of holes 1 and 10 in twosomes. The teams will then come together and play foursomes for round two  starting at 12:10 p.m. off of hole 1.

Eight SoCon teams – ETSU, Furman, Mercer, UNCG, Samford, Chattanooga, Western Carolina and Wofford – will be competing for the league title and an automatic bid to the NCAA regionals … The individual medalist will also earn an automatic regional qualification if he is not on the winning team.

ETSU won its record 19th SoCon title in 2016, edging runner-up UNCG by a single stroke … The Bucs put three players in the top-10, which included two-time Player of the Year Adrian Meronk (Wroclaw, Poland) – who earned medalist honors a year ago.

With Meronk graduating last May, a new individual medalist will be crowned in 2017.

Seven players that finished in the top-10 at last year’s SoCon Championship are in the 2017 field – including Gradecki as he finished tied for fifth for the second straight year.

Chattanooga is the top-ranked team in the league this year, as the Mocs are 93rd in the latest GolfStat rankings and own a team stroke average of 290.77 ... UNCG – who has posted consecutive runner-up finishes – owns the SoCon’s best team stroke average this year (289.07) and is ranked No. 100 nationally ... The Bucs (110) and Wofford (144) give the league four teams in the top 150.

Nine SoCon golfers have earned medalist honors this season including Wofford’s Andrew Novak – who leads the conference with a 70.86 stroke average … Gradecki is second at 71.69 and Chattanooga’s Wes Gosselin is thirhd at 72.07.

ETSU’s lineup features two freshmen, one sophomore, one junior and one senior.