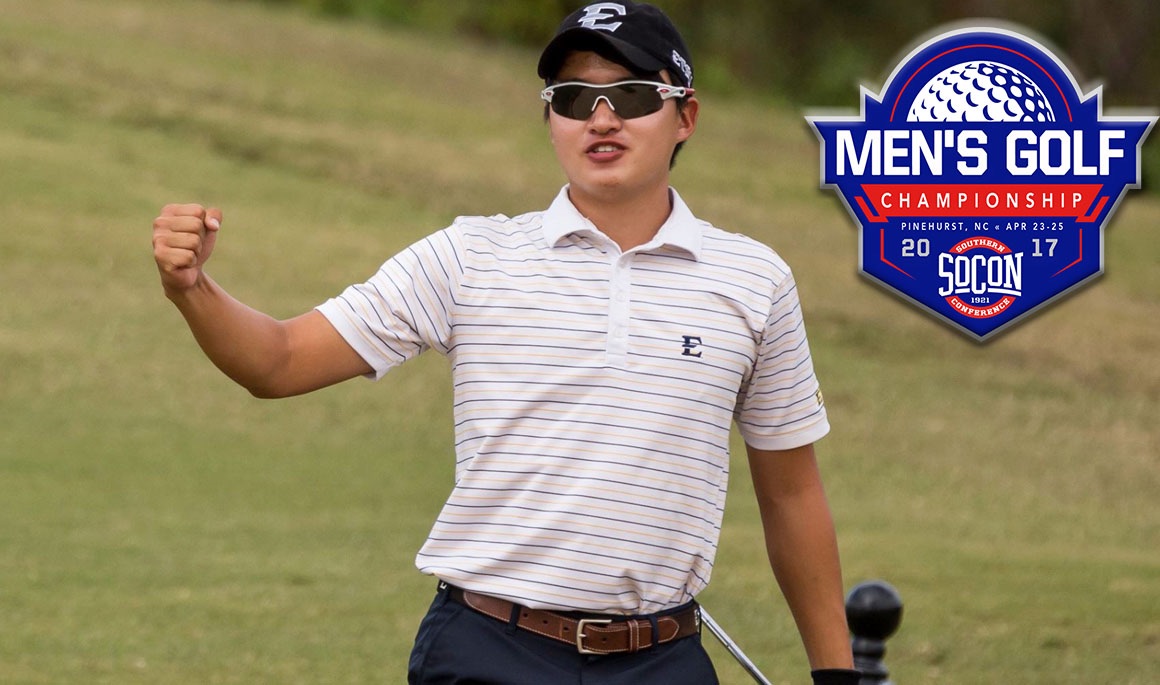 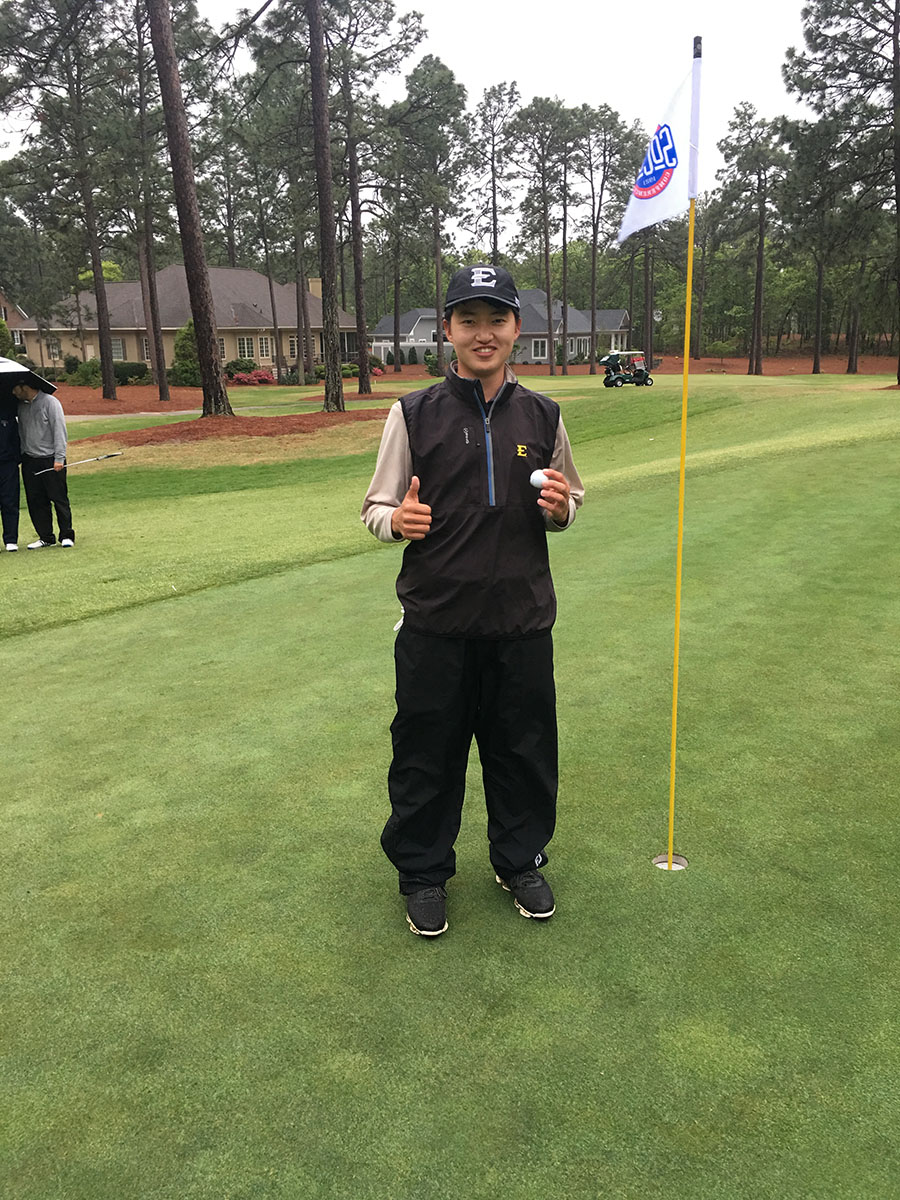 Kim following his hole-in-one on No. 17.

Kim records hole-in-one in second round; Four Bucs in top-10 after first two rounds at Pinehurst No. 9

Kim – who recorded a hole-in-one on the par-3, 220-yard 17th in round two – holds a one-shot lead at even-par 144 (73-71), and finds himself atop the leaderboard for the first time in his collegiate career. To go with his ace, the Buccaneer sophomore totaled two birdies, 29 pars and four bogeys in the first two rounds of the conference championship.

After hitting it left of the green and saving par on No. 17 in round one, Kim’s plan was just to land the ball on the green in round two. Instead, the Buccaneer did much better and recorded his third career hole-in-one.

“In the first round I hit it left of the green but was still able to save par. In the afternoon, my goal was to get the ball on the green for a chance at birdie,” said Kim. “I made good contact with my 5-iron and played a little draw. Once the ball disappeared, we heard people yelling and that’s when I knew it went in the hole. It was exciting and I am glad I was able to finish strong on No. 18.”

Kim began the second round two shots back of 18-hole leader and teammate Trevor Hulbert (Orlando, Fla.) following a 1-over 73 in round one – but after moving to 1-over with a bogey on the par-4, 381-yard 16th – the Daegu, South Korea native jumped into the lead with his ace on No. 17 to finish with a 71 in round two. Kim used the par-3s to his advantage as he leads the field with a 2.75 scoring average, while his 29 pars in the first two rounds also tops the field.

Kim holds a one shot lead over Chattanooga’s Wes Gosselin and a two-stroke advantage over UNCG’s Josh Stockwell and Jonathan Brightwell heading into Monday’s final round. Brightwell and Hulbert were both tied for the lead at the conclusion of round one, but the Spartan carded a 3-over 75 in second round play to move two spots down the board at 2-over-par 146.

“It feels good to be in the lead, especially since I haven’t played well coming into the tournament,” said Kim. “During the last few tournaments I was always thinking about my outcome instead of focusing on each shot. I worked on that heading into this weekend and it has paid off. My short game really helped me today and I look forward to go back out there tomorrow.”

“Geuntae played well and his score helped us a lot today. He was able to get the hole-in-one on a tough hole there on No. 17 and finished strong to take the lead,” said head coach Fred Warren. “Trevor played well in the morning and I was pleased to see him get off to a good start. We got off to a solid start in the opening round, which gave us a chance to take the lead. We did some good things in the afternoon, but we also made some mistakes. Overall, I am proud of the guys for playing well.”

The Bucs – who have won the last two conference championships and are in search of their 20th SoCon crown – used a strong opening round to gain control of the team leaderboard. ETSU built an 11-shot advantage after recording a 4-over 292 in round one, while the Bucs hold the 36-hole lead at 16-over-par 592 (292-300) en route to taking a six-shot lead into the final round. Overall, the Blue and Gold led the field in par-3 scoring by totaling a 2.98 average on Sunday, while the Bucs’ 116 pars were the most out of the eight teams.

Chattanooga and UNCG are both sitting right behind the Bucs in second place at 22-over-par 598, while Western Carolina is in fourth at 29-over-par 605. After shooting a 20-over 308 in the opener, the Mocs went low in round two to move up the board as they posted a 2-over 290 to pull into a tie with UNCG.

“We haven’t won a tournament this year, but we put ourselves in contention,” said Warren. “We battled through the cold and rain today, and will have to do the same tomorrow. This is a tough course and six shots can go in a hurry. We just have to go out there and play. We had a good test of golf today and it will be the same tomorrow.”

Joining Kim and Hulbert in the top-10 are Mateusz Gradecki (Oborniki Slaskie, Poland) and Ben Reichert (East Amherst, N.Y.). Hulbert is tied for fifth at 4-over-par 148 (71-77), while Gradecki and Reichert are tied for ninth at 6-over-par 150. Hulbert was tied for the lead after round one where he registered an eagle, two birdies, 12 pars and three bogeys; however, the Orlando, Fla. dropped four spots after turning in a 5-over 77 in round two. Junior Cayman Ratliff (Kingsport, Tenn.) is tied for 19th at 9-over-par 153 (76-77).

Monday’s tee times are set for 9 a.m. with the strong possibility of being pushed back by inclement weather predicted for the area. The teams played two rounds Sunday instead of the originally scheduled one because of the Monday forecast. ETSU is paired with Chattanooga and they are scheduled to tee off from No. 1 starting at 11:15 a.m.

Live scoring of the conference championship is provided via Golfstat. Twitter updates will be available by following @ETSUAthletics.