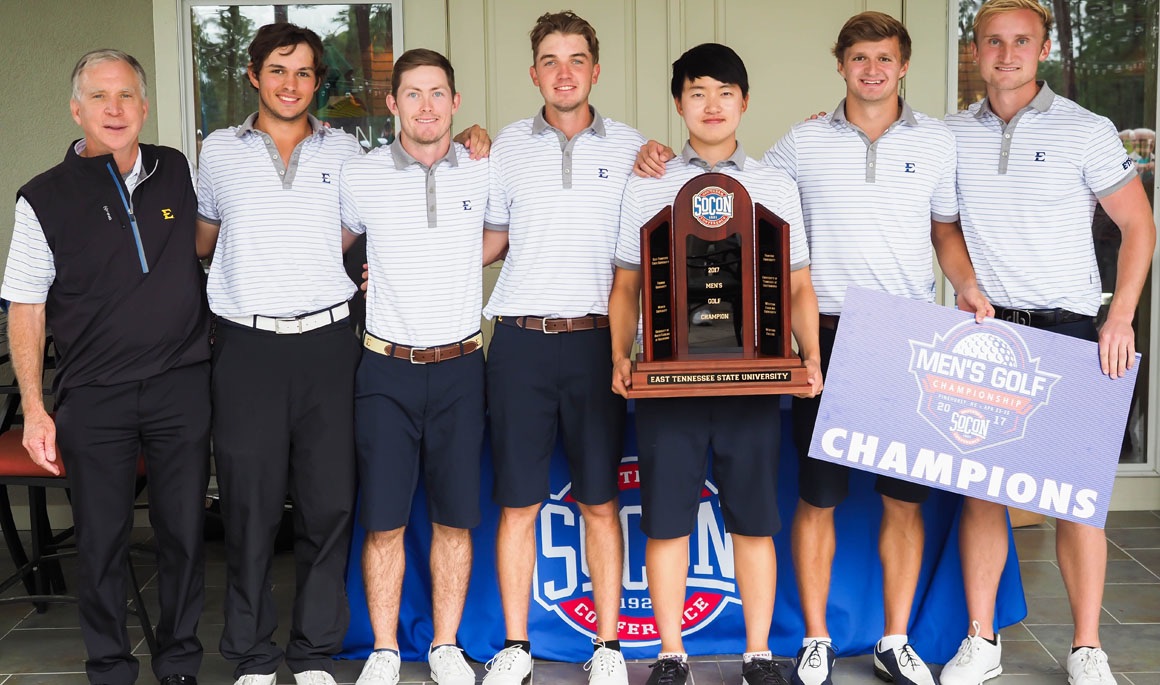 The Buccaneers led wire-to-wire and had three golfers place in the top-10 – including sophomore Geuntae Kim (Daegu, South Korea) winning a playoff to earn medalist honors – as the final round concluded on Tuesday afternoon at Pinehurst No. 9. This marked the first win of the season for the Blue and Gold, while it was Kim’s first collegiate tournament victory.

ETSU held a six-shot lead after 36 holes of competition on Sunday – and after having the final round postponed due to inclement weather Monday – the Buccaneers used the extra day to stay focused and relaxed. The plan worked as the Blue and Gold shot a 2-over 290 on Tuesday and finished the tournament with a team score of 18-over-par 882 (292-300-290) en route to defeating UNCG by eight strokes and Wofford by 16.

Meanwhile, Kim became the second Buccaneer in as many years to claim the individual title as Adrian Meronk accomplished the feat in 2016. Kim joins a list of 13 other Buccaneers to win an individual SoCon title and becomes the 22nd conference tournament medalist in program history.

“The guys did a really nice job this week and everyone contributed to this win,” said Warren, who picked up his 12th Coach of the Year honor at the post-awards ceremony. “I am very proud of Geuntae for receiving medalist honors. He put together some solid rounds and played well in pressure situations down the stretch today. To have Mateusz be part of a third straight team conference championship is also a great accomplishment. Cayman stepped up and gave us a really solid effort today, and our two freshmen (Trevor Hulbert and Ben Reichert) came through for us in their first conference tournament.

“We were able to stay focus yesterday by getting some practice shots in at a nearby course. The first 36 holes were really challenging and it was a long day on Sunday. We regrouped on Monday and played pretty well today. This week we were a lot better with our putting and our course management improved. We showed a lot of maturity and growth as a team. We have a lot of talent and the future is bright for our program. We worked hard this week and it’s a well-deserving victory. It’s a good win for the Bucs.”

As ETSU ran away with the team title, the individual champion came down to a playoff between Kim and SoCon Freshman of the Year Jonathan Brightwell of UNCG. The two finished with identical 54-hole scores of 2-over-par 218 and had to play the par-4, 457-yard No. 18 to determine the individual medalist.

Kim – who used his past playoff experiences to his advantage – defeated Brightwell as the ETSU sophomore made a two-foot par putt to secure his first-ever win as a Buccaneer. The Daegu, South Korea native entered the day with a one-shot lead and led by one heading to the tee box on No. 18. However, Kim carded a bogey on the 54th hole to set up the playoff, but the Buccaneer overcame the minor miscue moments later to earn the win. Overall, Kim led all players with 39 pars for the tournament, while he also collected a hole-in-one on the par-3, 220-yard No. 17 in round two.

“It feels really good to win the conference tournament and help the team get back to another NCAA Regional,” said Kim. “I was able to stay focused today and my playing partner helped calm my nerves. We were able to talk throughout the round and that helped me stay relaxed. I wasn’t nervous until I lined up for my last putt in the playoff. I have played in four playoffs during my career and won all of them, so that helped me stay confident. Once the playoff came, I knew our team already won so I was happy we were already going to regionals.”

Following the tournament, Gradecki talked about wrapping up his senior season with a third straight conference championship win as well as earning all-conference honors for the first time in his career.

“It feels really good to win another championship,” added Gradecki. “We have won all three times on this course and it’s a great feeling to continue our season. I am proud of our team and the effort they put in this week. I want to congratulate Geuntae on his win. He played really well all week.

“We had some ups and downs this season, but this is what we have been preparing for. We spent a lot of time working on our short game leading up to this tournament and that really paid off this week. The break yesterday was a little different, because we never have a day off between rounds, but I think it was good for us. We were able to practice and focus on the final round. It helped us relax, because the first day was challenging playing 36 holes in tough conditions. I'm looking forward working out with the team and gearing up for regionals.”

Ratliff – who earned the Pinnacle Award for the highest GPA on the winning team – was pleased with his effort in the final round.

“It’s exciting for the team and I am also proud of Geuntae to get the win today,” said Ratliff, who has a 3.939 cumulative GPA in finance. “Our goal when the season started was to defend our conference title and get back to regionals. We are happy to get back there. I played pretty solid today. Coming down the stretch I thought it could be close, so it felt good playing well at the end. I made good putts on No. 16 and 17, and saved par with an up-and-down on 18. I was happy with how I finished and it feels good to contribute to the win.”

“This was a good overall team win,” said Hulbert. “We all played solid and consistent. Our best tournament came at the right time as we got solid team win. I was pretty consistent today and had a big birdie on No. 16 to finish strong. Overall, the tournament was great and I am glad we all played a part in the win.”

With the win, ETSU secured the league’s automatic bid to the NCAA Regional, which begins Monday, May 15. The Selection Show will be televised live on Golf Channel starting at noon on Thursday, May 4.