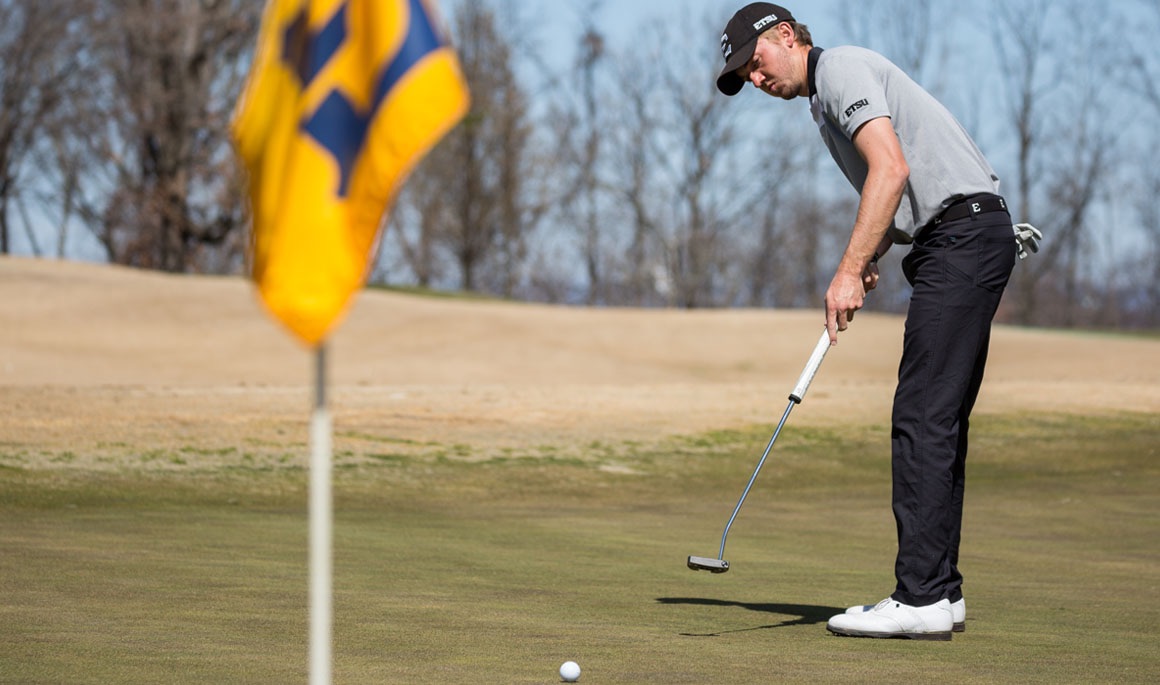 COLLEGE GROVE, Tenn. (May 16, 2017) – The ETSU men’s golf team wrapped up second round play at the NCAA College Grove Regional on Tuesday. The Buccaneers now sit in 12th-place at The Grove Club.

ETSU carded a 15-over 303 on day two and dipped four spots down the leaderboard, as the Bucs are 22-over-par 598 following the first two rounds of the regional.

Trevor Hulbert (Orlando, Fla.) led the Blue and Gold on Tuesday as the Buccaneer freshman registered a 2-over 74 and is tied for 44th at 6-over-par 150 for the tournament. Hulbert birdied the first two holes of his round and was 1-under with five holes left on the day; however, the Orlando, Fla. native posted a double-bogey, two bogeys, a birdie and a par to finish with the 74.

Despite posting a 6-over 78 in round two, senior Mateusz Gradecki (Oborniki Slaskie, Poland) still leads the Bucs as he’s tied for 27th at 3-over-par 147.

Vanderbilt still holds the team lead after 36 holes as the top-ranked Commodores shot a 3-under 285 on Tuesday en route to posting a 12-under-par 564 through the first two rounds. Lipscomb went low on day two and jumped six spots up the board as the 35th-ranked Bisons are in a three-way tie for second at 4-under-par 572. No. 12 Clemson and No. 47 UCF are also tied for second, while 34th-ranked Kennesaw State is in fifth at 1-under-par 575.

A day after Vanderbilt’s Patrick Martin (No. 9 via Golfstat) and Clemson’s Bryson Nimmer (No. 46 via Golfstat) matched the lowest collegiate round in the history of The Grove, Lipscomb’s Dawson Armstrong (No. 57 via Golfstat) set a new record less than 24 hours later. Armstrong fired a 7-under 65 on Tuesday to take the individual lead at 10-under-par 134. Armstrong holds a one-shot lead over Martin and a three-stroke advantage over Nimmer.

The regional will wrap up on Wednesday as the first groups tee off at 8:50 a.m. ETSU will be paired with TCU and Texas Tech as the teams go out from No. 10 at 9:25 p.m.

Live scoring of the NCAA Regional is provided via Golfstat. Twitter updates will be available by following @ETSUAthletics, while recaps will be provided after each round on ETSUBucs.com.