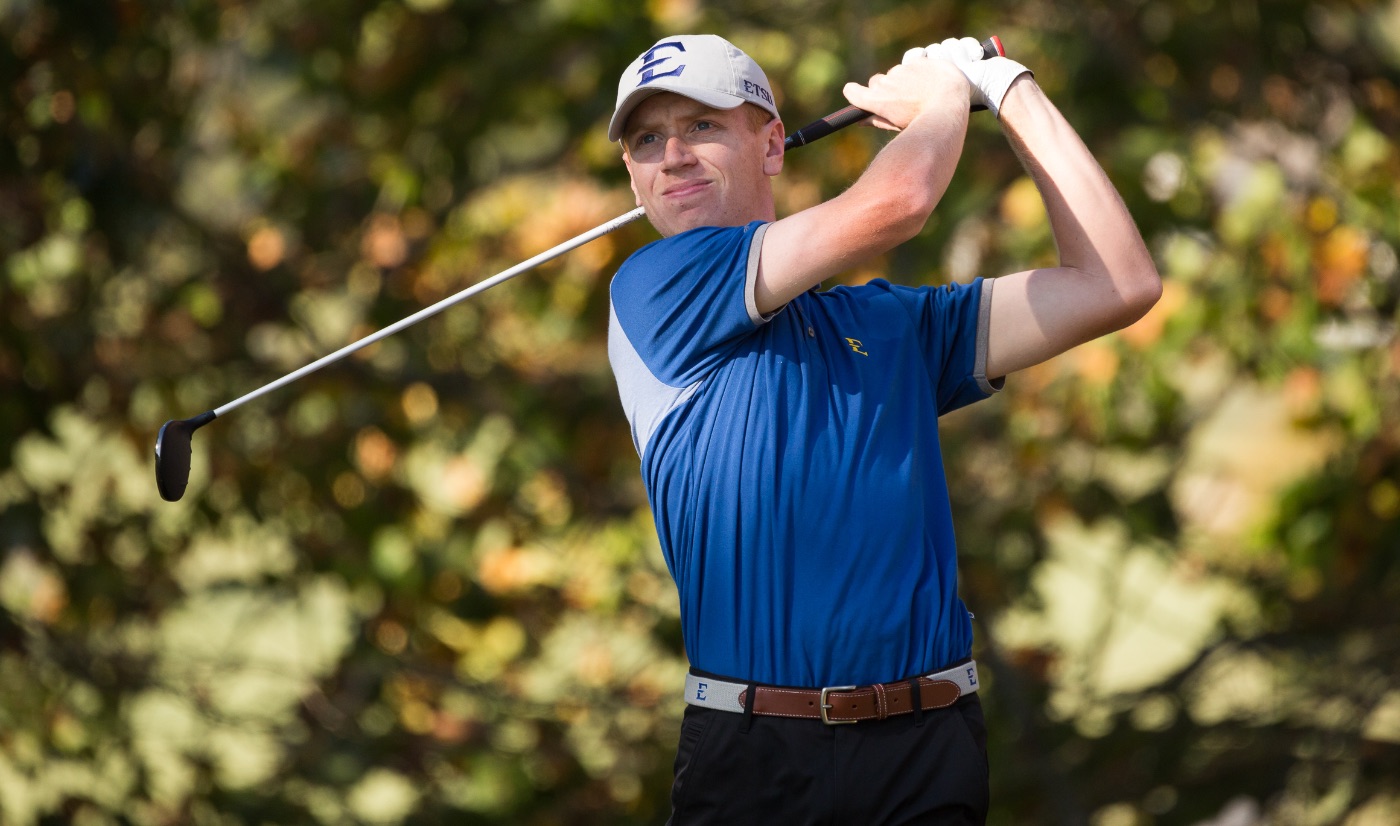 Buccaneer freshman fires 2-under 70 in Friday’s opening round

JONESBOROUGH, Tenn. (Oct. 13, 2017) – It was no surprise that ETSU freshman Jack Rhea (Jonesborough, Tenn.) turned in his lowest score of his young collegiate career on Friday.

With a strong backing of family, friends and supporters, Rhea fired a 2-under-par 70 in the opening round of the 20th annual Bank of Tennessee Intercollegiate on Friday afternoon from Blackthorn Club at The Ridges.

Rhea – who registered four birdies, 12 pars and two bogeys in the opening round on his home course – is tied for 11th and sits four shots off the lead. The Jonesborough, Tenn. native birdied two of his first four holes, and after carding back-to-back bogeys on No. 8 and 9, Rhea bounced back with two birdies and seven pars on the back nine to climb back up the leaderboard.

Following the round, Rhea talked about the comfort level of being on his home course and having a strong group of supporters.

“Obviously, I felt comfortable playing out here because I know the course very well,” said Rhea. “It wasn’t like coming out here with your friends on a Saturday morning. It was different, but I had fun out here today. I had a lot of support, which was nice to have. It was fun to see everyone smiling and giving a fist pump when I made a big putt, so it felt good to have their support.”

Despite the small stumble with back-to-back bogeys on No. 8 and 9, Rhea knew there were some opportunities to get those strokes back after making the turn. Thanks to some strong chipping and putting, the Buccaneer rookie was able to do just that.

“I hit into the hazard on No. 8 and 9 and made those two bogeys, so it was a disappointing turn. But I feel like the back nine is a little easier with there being more birdie opportunities,” Rhea said. “My chipping and putting was unbelievable today. I made a lot of par putts that kept me in it all afternoon. I made back-to-back 10-foot par putts on No. 12 and 13, and that kept it going. If I missed those putts, that would have put me at 1-over going into 14, so that was the turning point in the round.”

Rhea’s fourth birdie came on the par-5, 517-yard 14th, and after getting back to 2-under for the round, the hometown product strung together four straight pars to end the day. Rhea finished with a strong save on 18 to end on a positive note. His approach shot flew over the green, and after his chip shot rolled over the hole, Rhea was left with another long par putt. Like he did all afternoon, Rhea sank that final putt, which resulted in his 70.

“That was a big putt there at the end,” said Rhea. “Even if I had made bogey, 71 is not bad, but it would have left a bad taste in my mouth. It was a good putt to make.”

Rhea trails leader JD Hughes by four strokes as the Penn State junior fired 6-under 66 to hold a one-shot lead over a group of three golfers. Another group of three players are tied for fifth at 4-under 68.

Penn State – the 2015 team champion – sits atop the leaderboard after day one as the Nittany Lions carded an 11-under-par 277 to take a three-stroke lead over No. 11 Tennessee. UNCW is in third at 7-under-par 281, while No. 46 Louisville and Coastal Carolina are tied for fourth at 6-under-par 282.

The Bucs finished at 9-over-par 297 on Friday and enter Saturday’s second round in 12th-place.

Freshman Shiso Go (Kanagawa, Japan) birdied three of his final seven holes to move into a tie for 38th at 1-over-par 73, while Geuntae Kim (Daegu, South Korea) – ETSU’s No. 1 golfer on the weekend – finished tied for 54th at 3-over-par 75. The Bucs’ other countable score came from sophomore Kevin Burns (Canton, Ga.) as he is tied for 78th (+7).

“Jack played well and he was one of our bright spots today,” said head coach Fred Warren. “Overall, we struggled as a team, which is a little disappointing because we played well in qualifying. Tournament pressure sometimes comes into affect. We do have a young team with three freshmen and a sophomore, so we didn’t handle it as well as we should have. Jack had a little blip on No. 8 and 9, but he came back and played well on the back nine, so I am very proud of is play today. The other positive was Shiso (Go). He’s a really good player, but he struggled early before turning things around on the back. He had three birdies on the back nine, and hopefully that gives him something to build upon.”

Sophomore Trevor Hulbert (Orlando, Fla.) turned in a strong showing as an individual. Hulbert – who birdied his first two holes and collected an eagle on the par-5 14th – is tied for 28th at even-par 72.

ETSU is paired with Kansas State and East Carolina in Saturday’s second round action. The Bucs tee off starting at 9:20 a.m. from No. 1.