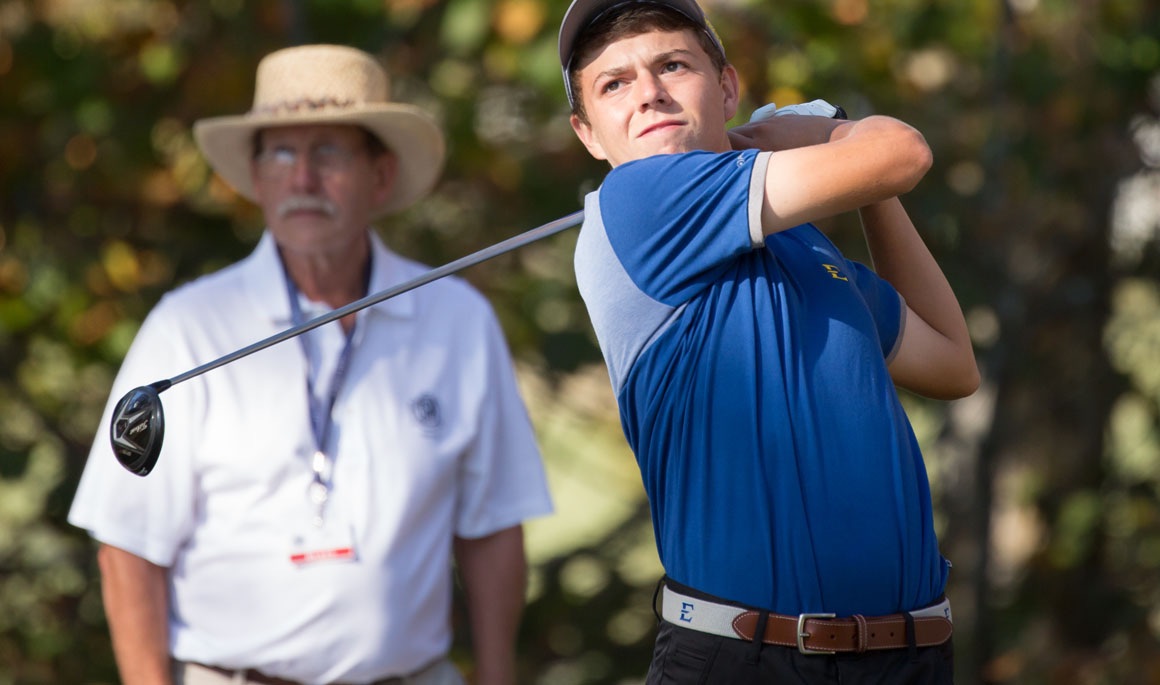 ALPHARETTA, Ga. (Oct. 20, 2017) – Courtesy of posting the lowest round of his young collegiate career, freshman Austin Carter (Kingsport, Tenn.) led the ETSU men’s golf team in Friday’s opening round of the Golf Club of Georgia Collegiate from the Lakeside Course.

Carter – who is playing in just his fourth collegiate tournament – got off to a strong start in golf’s toughest tournament of the fall season, as the Buccaneer rookie fired a 3-under-par 69 to sit tied for 12th after 18 holes of play. The Kingsport, Tenn. native carded four birdies, 13 pars and a bogey in the opening round, which bested his previous low round of 70 set in last weekend’s final round of the Bank of Tennessee Intercollegiate. Carter went par-birdie-bogey to open his first three holes, while picking up his second birdie on the par-4, 403-yard No. 5. Following nine straight pars, Carter birdied two of his final four holes to finish 3-under and three shots off the lead. Carter is one of 10 golfers tied for 12th, which includes No. 24 Hidetoshi Yoshihara (UCLA), No. 47 Will Zalatoris (Wake Forest) and No. 74 Turner Maclean (TCU).

In a field that features 10 teams ranked in the top-25 and 14 individuals ranked in the top-50, three golfers hold a share of the individual lead after recording a 6-under 66 on Friday. Texas’ Doug Ghim (No. 30), Oklahoma State’s Matthew Wolff (No. 41) and Georgia Tech’s Chris Petefish all hold a one-stroke lead over Duke’s Alex Smalley and Georgia Tech’s Michael Pisciotta. Meanwhile, a group of six players are tied for sixth at 4-under 68.

Oklahoma State – the top ranked team via the Golfweek Rankings – holds the team lead at 11-under-par 277, while No. 31 Texas is two shots back in second and four teams are tied for third at 6-under-par 282.

ETSU’s other countable scores came from freshmen Jack Rhea (Jonesborough, Tenn.) and Shiso Go (Kanagawa, Japan), aong with sophomore Trevor Hulbert (Orlando, Fla.). Rhea and Go are tied for 53rd at 2-over 74 and Hulbert is tied for 67th at 4-over 76.

Second round play gets underway Saturday at 9 a.m., while the Bucs go off at 10:36 from No. 10. Again, ETSU is grouped with TCU and Virginia.

Live scoring for the tournament is provided via Golfstat, while recaps for each day will be provided on ETSUBucs.com. Twitter updates will also be available by following @ETSU_MGolf.