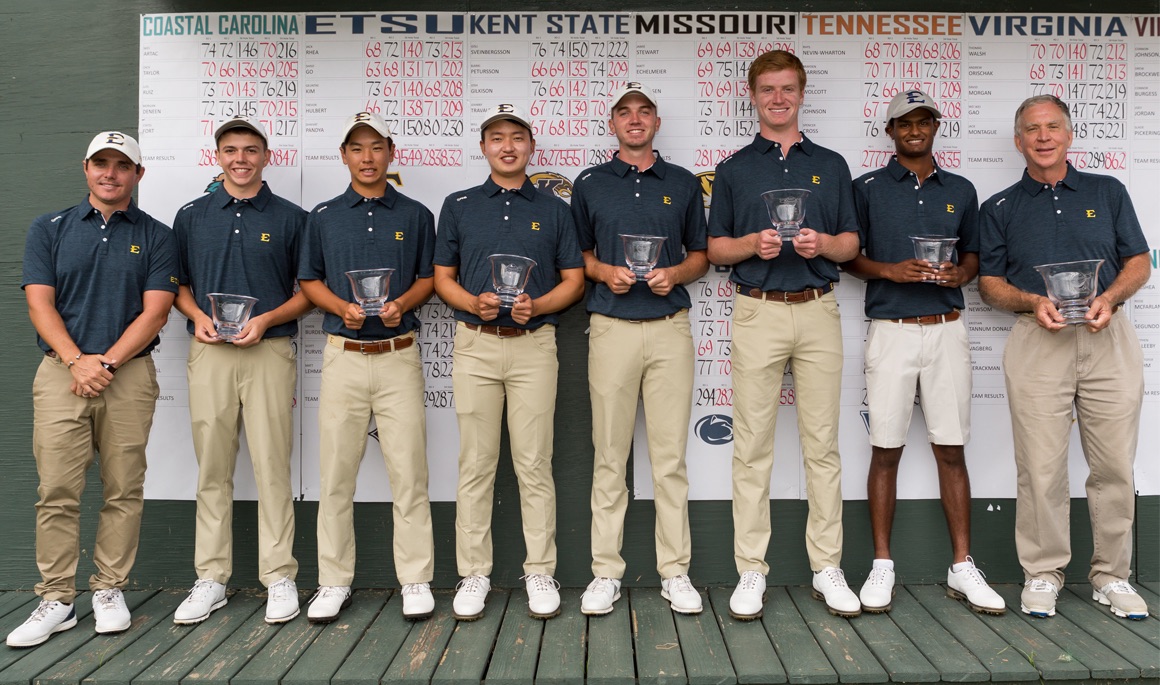 For the first time in the 21-year history of the Bank of Tennessee Intercollegiate, the ETSU men’s golf team has claimed the hardware.

Led by sophomore Shiso Go (Kanagawa, Japan) – who finished runner-up at 14-under-par 202 – the Buccaneers were left hoisting the title after finishing with a team score of 32-under-par 832 on Sunday afternoon from the Blackthorn Club.

ETSU led wire-to-wire in a tournament field that featured three teams ranked in the top-15 and five in the top-50. The Bucs began Sunday’s final round with a two-shot lead over No. 50 Kent State; however, No. 12 Louisville quickly made its move and the Cardinals sat around the clubhouse to see if they did enough to pull out the win.

The Blue and Gold led by seven shots early in the final round and held a five-shot lead after scores were reported through 12 holes, but the tournament win wasn’t sealed until after a few tense moments on the final hole. With ETSU leading by a stroke, Go hit his approach shot to the right of the green and just missed landing in the water. Then, as he was forced to hold an unorthodox stance on his chip shot, Go landed the ball two-feet of the hole and made his par putt to deliver the win.

The Bucs, who totaled the second-lowest team score in the 21-year history of the tournament, defeated Louisville by one stroke, No. 6 Tennessee by three and Kent State by seven shots. ETSU has now won at least one tournament title in each of the last seven seasons, while this marked the 56th career win for head coach Fred Warren during his tenure with the Bucs.

“After 20 years of getting condolences, it’s nice to get congratulations,” said Warren, whose teams finished runner-up here in 2006, 2008 and 2014. “We made it harder than it should’ve been, but on the other hand, it’s tough to win these tournaments. This was a really good field we had here this weekend. Our guys did so many good things and we were able to overcome getting in our own way a little bit. To be honest, there’s a lot of joy and also a lot of relief. It was one of the most exciting tournaments I have ever been a part of. I am glad we came out on top and I am really proud of our guys.”

Louisville’s Simon Zach edged Go for medalist honors as he carded a 6-under 66 on Sunday to win by one shot at 15-under-par 201. Go – the 36-hole leader – was tied for the lead after posting back-to-back birdies on No. 13 and 14, but a bogey on the par-3, 228-yard 16th moved the Buccaneer sophomore back a stroke. Go finished with consecutive pars, including the key save on No. 18 to bring the ETSU faithful into celebration. Go, who led the Blue and Gold with 18 birdies on the weekend, ended the round at 1-under 71 on Sunday.

“It feels good to have our team finally win this tournament,” said Go. “This tournament is older than me. We really wanted to win it for coach.”

Senior Geuntae Kim (Daegu, South Korea) paced the Bucs in the final round as he shot a 4-under 68 en route to posting the best finish at his home tournament. Overall, Kim finished tied for 10th at 8-under-par 208 (73-67-68).

“It feels amazing to have our team win this tournament,” said Kim, who is the lone senior on this year’s Buccaneer roster. “I am really excited for how our team played this weekend. I am proud of the guys. What Shiso did there on No. 18 was incredible.”

Trevor Hulbert (Orlando, Fla.) also turned in his best showing at the Bank of Tennessee Intercollegiate as the junior standout finished tied for 12th at 7-under-par 209 (66-72-71). The Orlando, Fla. native charged out of the gates on Sunday as he was five-under through his first five holes and eventually ended the day with his 71. Hulbert started the day with birdies on No. 1 and No. 3, while sinking a long eagle putt on the par-5, 567-yard No. 4 and then walked away with his 11th birdie of the tournament on the par-4, 401-yard No. 5.

“It’s cool to be the first team to win this tournament,” said Hulbert. “We all thought we were playing pretty well and we knew what we could do if we all played to our potential. We had some rough patches today but we hung tough and stayed focused.”

“It feels great. I am glad Coach Warren finally won this event,” said Rhea. “It’s something he has been after over the last 21 years, so it’s pretty exciting to do that for him this year. It was a little nerve-racking, but we were excited to be there. This is what we play for.”

With two fall tournaments remaining, ETSU returns to action this weekend as the Bucs begin play at the prestigious Golf Club of Georgia Collegiate this Friday.