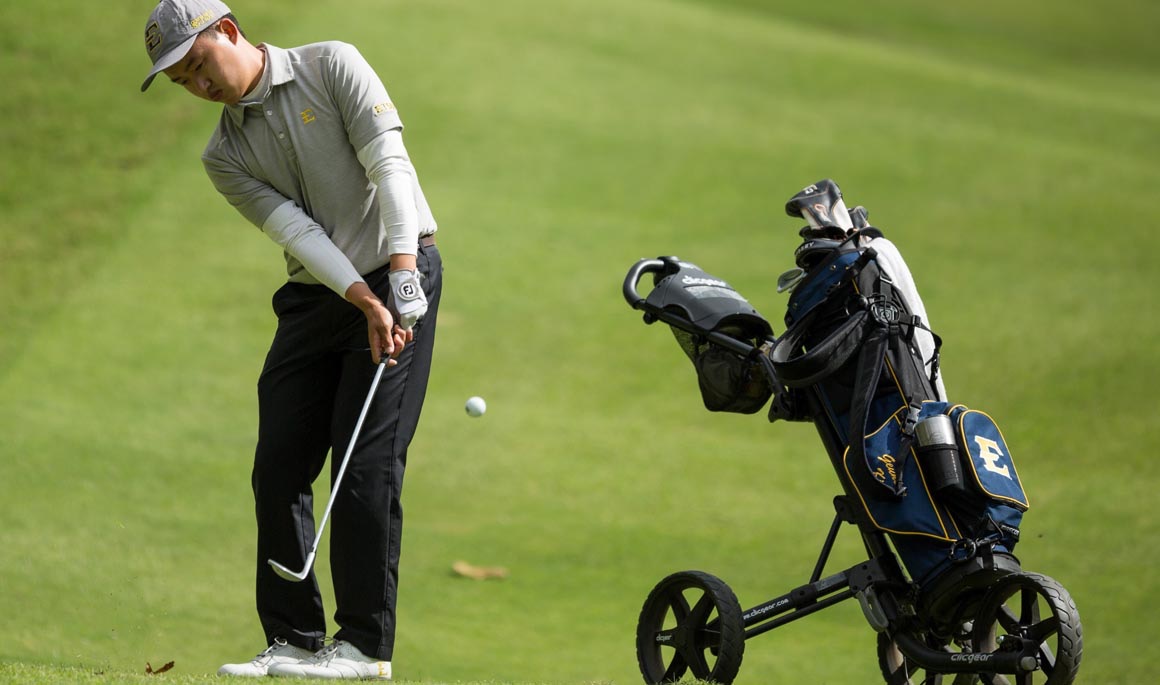 Three Bucs sit in the top-10 after 36 holes in Statesboro, Georgia

STATESBORO, Ga. (March 16, 2019) -- It was moving day at The Schenkel Invitational and the ETSU men’s golf team jumped its way to the top of the leaderboard following second round play on Saturday afternoon from the Forest Heights Country Club.

The Bucs, who began the day two shots off the lead in third-place, fired an 8-under 280 to take the 36-hole lead at 11-under-par 565. ETSU received an all-around team effort in round two as the Blue and Gold registered 24 birdies – 15 of them coming between holes No. 4 and No. 9 – to grab a three-stroke advantage over No. 50 Mississippi State and a five-shot lead over host Georgia Southern. Overall, the Bucs lead the 14-team team field with 34 birdies as well as in par-4 scoring at one-under. Mississippi State and Kentucky are the next closest teams in par-4 scoring at seven-over. ETSU is also playing the par-5s at 15-under for the tournament.

“All five guys played well today and we really got on a roll starting on number four,” said head coach Fred Warren, whose Bucs won earlier this fall at the Bank of Tennessee Intercollegiate. “We missed some shots early and a few late, but we started making some putts on No. 4 and everyone contributed. It is very encouraging to have everyone playing well. It shows when we are on we are a pretty good team. Geuntae (Kim) gave us another solid round and is leading us for the tournament. I am also pleased with how Austin (Carter) has been playing. Tomorrow will be tough as host Georgia Southern is a few shots back and Mississippi State – who just won a tournament – is right behind us. It will be another good test for our team.”

With all five golfers posting scores of even-par or better on Saturday, senior Geuntae Kim (Daegu, South Korea) led the Blue and Gold with a 4-under 68 to move into a tie for fourth at 4-under-par 140. Kim caught fire on the front nine where he strung together three straight birdies from No. 5-7, while eventually moving to five-under following his fifth birdie on the par-4, 386-yard No. 16. The Buccaneer senior recorded his only blemish with a bogey on the par-4, 438-yard No. 17 when he walked away with a bogey, but Kim carded a par on his final hole to post his 68.

“Today’s round was really good, said Kim, who only trails leader Steven Fisk (Georgia Southern) by three shots. “Yesterday I started bad and today I focused on starting better. I was able to do that and took advantage of the birdie chances on No. 5, 6 and 7. My course management was really well. It feels amazing to have our team leading and we are looking forward to the challenge tomorrow.”

Junior Trevor Hulbert (Orlando, Fla.) and sophomore Austin Carter (Kingsport, Tenn.) remain in the top-10. Hulbert, who led the Bucs in Friday’s opener, is tied for sixth at 3-under-par 141, while Carter generated his second straight 71 and is tied for eighth at 2-under-par 142. Carter has totaled 28 pars and five birdies over his first 36 holes.

“It’s a great feeling to be leading the tournament. All of us know if we play to our ability then we can be in it,” said Hulbert. “It was good to be in this position during the fall when we won our home tournament. We can take what we learned that weekend and use it to help us tomorrow. It’s good to see everyone play solid golf all around. Our goal is to do the same tomorrow and get it done.”

Carter has built upon his 67 on Tuesday at the General Hackler Championship and said that round has given him confidence.

“It’s really cool to see our name at the top (of the leaderboard),” said Carter, who has registered three straight rounds below par. “My 67 on Tuesday in Myrtle Beach has given me a lot of confidence. I have been hitting my drives straight and been getting my putter going this week. We know there are some teams right behind us, so we need to have another solid round tomorrow and not let our foot off the peddle. Everyone is playing well and each of us has the chance to go low.”

Sophomore Shiso Go (Kanagawa, Japan) bounced back from opening the tournament with a 75 on Friday as he totaled a 2-under 70 to move 26 spots up the leaderboard into a tied for 18th at 1-over-par 145. After recording three birdies, three pars and three bogeys on the front nine, Go collected four birdies – including two over his final three holes – three pars and two bogeys on the back nine. Fellow sophomore Jack Rhea (Jonesborough, Tenn.) also moved up the board after finishing with a 1-under 71 on Saturday. Rhea showcased a stretch where he bagged five birdies over an eight-hole stretch from No. 5 – No. 12, before walking away with a double-bogey on the par-3, 13th and a bogey on the par-4, 17th. For the tournament, Rhea is tied for 12th at even-par 144.

Mississippi State’s Peng Pichaikook – the No. 27-ranked player via Golfstat – is one shot back of Fisk, while College of Charleston’s Logan Sowell is in third-place at 5-under-par 139. Kim is tied with Notre Dame’s Andrew O’Leary at 4-under-par 140.

The Bucs will be paired with Mississippi State and and College of Charleston in Sunday’s final round. The teams tee off from No. 1 starting at 10:30 a.m.

Live stats for the tournament is available via Golfstat. Twitter updates can be accessed by following @ETSU_MGolf. Recaps will be available following each round on ETSUBucs.com.