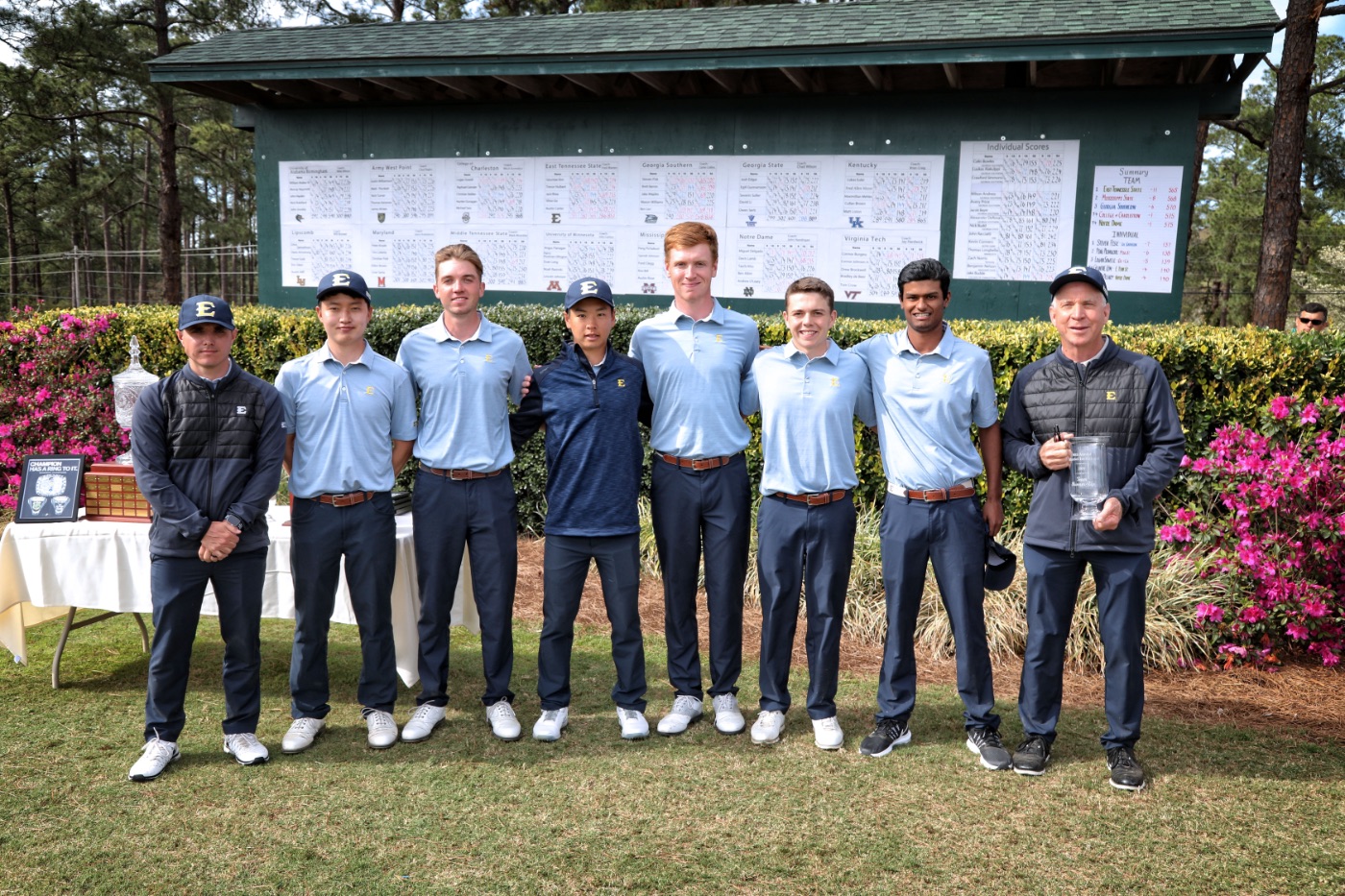 STATESBORO, Ga. (March 17, 2019) -- The ETSU men’s golf team had four players finish in the top-10, while the Buccaneers earned runner-up honors at the Schenkel Invitational, which concluded with final round play on Sunday from Forest Heights Country Club.

The Bucs began the morning with a three-shot lead over No. 50 Mississippi State and a five-stroke advantage over host Georgia Southern; however, the Eagles used a record-setting performance to overcome the deficit and capture the win on their home course for the second time in tournament history.

ETSU posted a 2-under 286 in the final round to finish at 13-under-par 851 (285-280-286) on the weekend, while Georgia Southern – who tied the lowest round in tournament history at 20-under 268 on Sunday – finished at 26-under-par 838, marking its first win at the Schenkel Invitational since 2014. This also marked the Bucs’ highest finish their 18 years of playing in this tournament.

After the Bucs fell behind by five strokes to start the round, ETSU climbed within two when Austin Carter (Kingsport, Tenn.) and Jack Rhea (Jonesborough, Tenn.) combined to play the final three holes on the front nine at five-under par. However, the Eagles’ four countable scores played the front nine at 15-under-par and Georgia Southern went on to build a double-digit lead in which they wouldn’t relinquish.

Carter and Rhea led the Blue and Gold on Sunday as they combined at five-under-par and both finished in the top-10. Carter posted his best collegiate finish as he led ETSU by finishing tied for fifth at 4-under-par 212 (71-71-70). The Kingsport, Tenn. native – who joined Chris Wisler (T3, 2001) and Mike Hulbert (T4, 1980) as the only Buccaneers to finish in the top-five at this tournament – registered his fourth straight round below par by totaling a 2-under 70 after collecting four birdies, 12 pars and two bogeys on Sunday. For the weekend, Carter registered 40 pars and nine birdies over the 54-hole tournament en route to posting his best collegiate finish and tournament score.

Rhea added the lowest round for the Bucs on Sunday as he fired a 3-under 69 to finish tied for seventh at 3-under-par 213. The Jonesborough, Tenn. native got things going with three straight birdies on No. 7, 8 & 9, while collecting his fourth birdie on the par-3, 203-yard No. 15.

Joining Carter and Rhea in the top-10 were senior Geuntae Kim (Daegu, South Korea) and junior Trevor Hulbert (Orlando, Fla.). The Buccaneer duo both tied for 10th at 2-under-par 214. Kim shot a 2-over 74 in the final round, while Hulbert went 1-over 73.

Georgia Southern made it a clean sweep as No. 35 Steven Fisk earned medalist honors by finishing at 14-under-par 202 to claim a six-shot win over No. 27 Peng Pichaikool from Mississippi State. Fisk and teammate Brett Barron both went low on Sunday as they carded  a 7-under 65 in the finale.

The Bucs will make their final tune-up before the Southern Conference Championship by heading Franklin, Tenn. for the Mason Rudolph Championship, which will be held April 5-7.