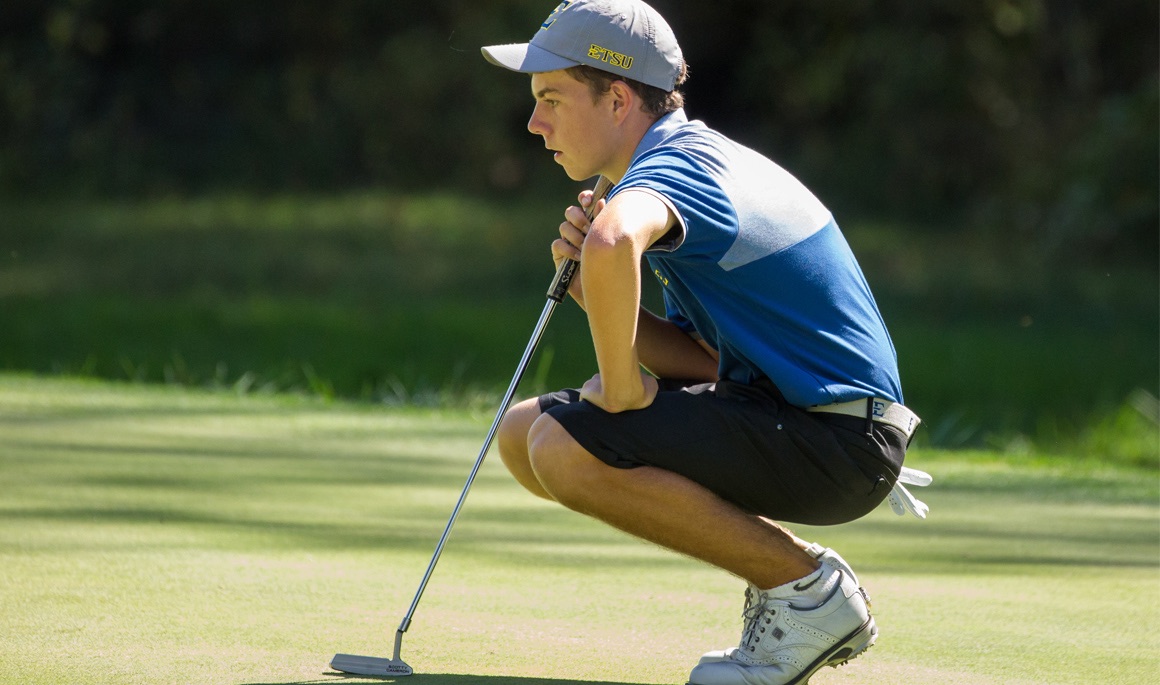 FRANKLIN, Tenn. (April 5, 2019) -- ETSU sophomore Austin Carter (Kingsport, Tenn.) put together a strong finish in the opening round of the Mason Rudolph Championship on Friday afternoon and the Buccaneer men’s golf team looks to carry that momentum into the weekend at the Vanderbilt Legends Club South Course.

After carding 11 pars and two bogeys on his first 13 holes, Carter – who his coming off his top collegiate finish in the Bucs’ last outing at the Schenkel Invitational – turned things around by registering four birdies over his final five holes to move into a tie for 18th at 2-under-par 69. Carter was one of two Buccaneers to post four birdies on their round as fellow sophomore Shiso Go (Kanagawa, Japan) started strong en route to finishing at even-par 71. Go birdied three of his first four holes and collected his final birdie on the par-4, 458-yard No. 7 to end the day tied for 34th.

The Buccaneer duo trail Kentucky’s Cullan Brown and Tennessee’s Nolan Ray as they both finished at 7-under-par 64, and will enter Saturday’s round atop the individual leaderboard. Brown and Ray hold a one-stroke lead over Northwestern’s David Nyfjall and a two-shot lead over Georgia Southern’s Steven Fisk and Marquette’s Austin Kendziorski.

Tennessee also holds the lead on the team leaderboard as the 25th-ranked Volunteers carded a 15-under-par 269 on Friday and lead Memphis by six shots and Coastal Carolina by seven. No. 45 Northwestern sits in fourth-place at 6-under-par 278, while Western Kentucky and Kentucky are tied for fifth at 5-under-par 279.

ETSU’s other two countable scores on Friday came from senior Geuntae Kim (Daegu, South Korea) and sophomore Jack Rhea (Jonesborough, Tenn.) as they are both tied for 42nd at 1-over-par 72.

The Bucs will tee off on Saturday starting at 10:20 a.m. (Eastern) from No. 10 and will be paired with Vanderbilt and Mississippi State.

Golfstat will carry live scoring of the tournament, while recaps each day will be provided on ETSUBucs.com. Twitter updates will also be provided by following @ETSU_MGolf.