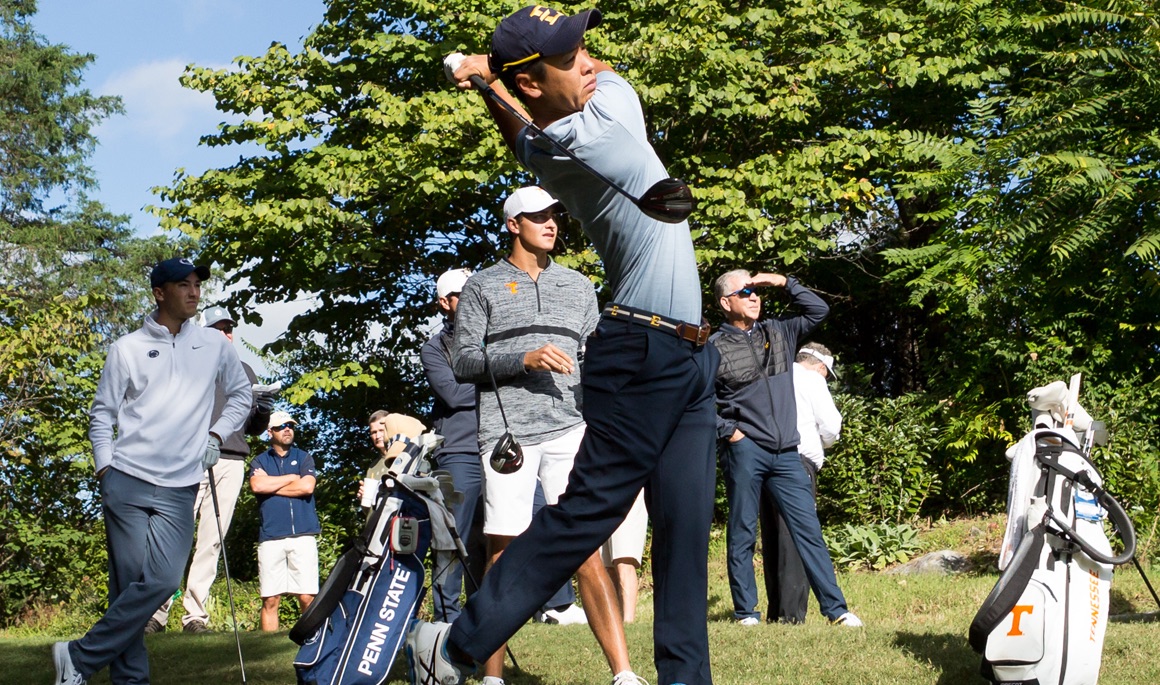 Go, who tallied three birdies and 15 pars, is in a three-way tie for second place and enters Monday’s second round one shot off the lead. The Buccaneer sophomore parred his first nine holes to start the day, while a birdie on the par-5, 514-yard No. 10 started a run of three birdies on the back nine to help propel him near the top of the leaderboard. Following another par on No. 11, Go birdied the par-3, 176-yard No. 12 and collected his final one on the par-5, 530-yard No. 15 en route to finishing with a 69. Go’s 15 pars were tied for the most in the opening round, while he also led the Blue and Gold in par-3 (-1) and par-5 scoring (-2).

The individuals are chasing UNCG’s Zack Swanson as he posted a 4-under 68 in round one to become the 18-hole leader. Swanson was one-over thru seven, but an eagle on the par-5, 535-yard No. 8 sparked a charge following the turn. Swanson registered four birdies, four pars and one bogey on the back nine to grab a one-shot lead.

Swanson has his Spartans atop the team leaderboard as the reigning champions recorded a 5-under 283 to post a six-shot advantage over the Bucs and Mercer. UNCG came back to the field in the closing holes as its top two golfers played the final three holes at four-over-par. The Bucs led the eight-team field in par-5 scoring (-6), but combined to play the par-3 and par-4s at 14-over-par. Furman, who was grouped with ETSU on Sunday, is in fourth-place at 6-over-par 294, while Chattanooga rounds out the top-five at 8-over-par 296.

Sophomore Jack Rhea (Jonesborough, Tenn.) – the Buccaneer leader at last year’s championship – is one of three golfers tied for sixth at 1-under 71. Rhea parred his first seven holes before bagging the first of four birdies on No. 8, but after back-to-back birdies on No. 14 and No. 15, the Jonesborough, Tenn. native bogeyed two of his final three holes to end the round with a 71.

The Bucs’ other two countable scores came from redshirt junior Trevor Hulbert (Orlando, Fla.) and sophomore Austin Carter (Kingsport, Tenn.). Hulbert collected four birdies on the day but finished at 1-over 73, placing him tied for 12th. Carter is tied for 23rd at 4-over 76.

Monday’s second round gets underway at 8 a.m., while the Bucs tee off starting at 10:15. Golfstatwill carry live scoring of the entire tournament,  while recaps each day will be provided on ETSUBucs.com. Twitter updates will also be provided by following @ETSU_MGolf.