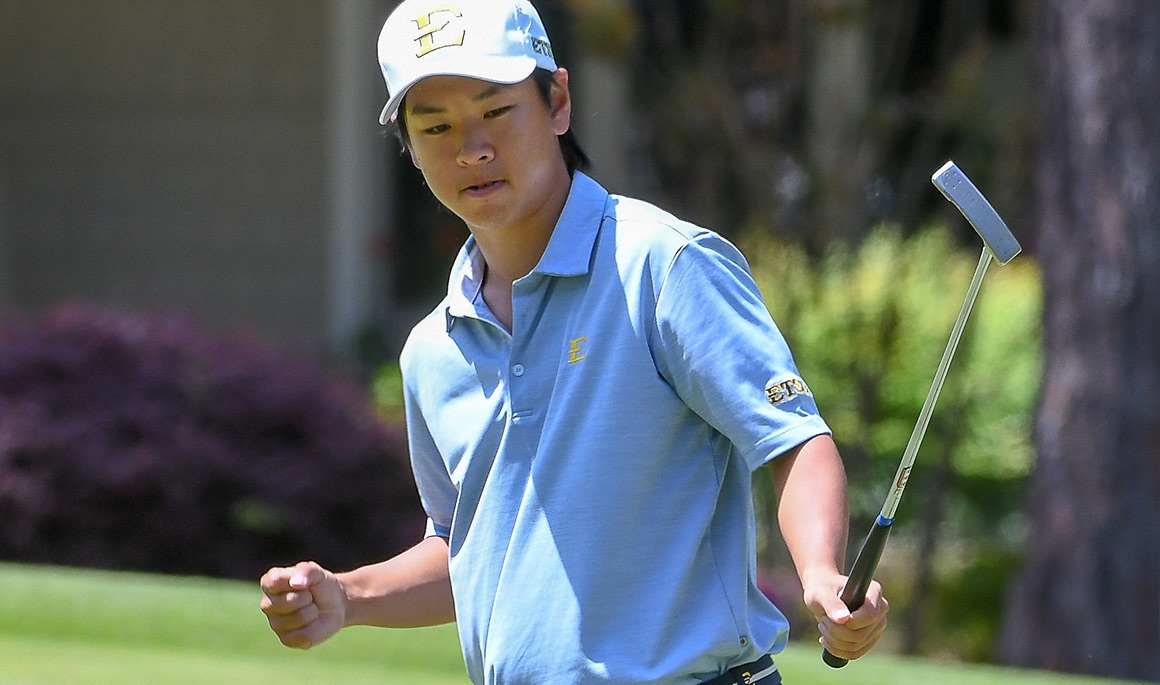 After playing nearly a flawless tournament, the Buccaneer sophomore claimed his first collegiate win by defeating UNCG’s Nick Lyerly in a playoff to capture medalist honors at the Southern Conference Championship on Tuesday afternoon from Pinehurst No. 9 in Pinehurst, North Carolina.

Go, who entered the day one shot back of Lyerly (the 2018 conference champion), put together another stellar round by firing a 6-under 66 to finish the tournament at 11-under-par 205. Go was on Lyerly’s heels all afternoon and finally overtook the outright lead following a birdie on the par-4, 417-yard No. 14 to move to 10-under. Lyerly pulled back even with a birdie on 16, but again Go went back up a stroke with his sixth birdie of the round on No. 17. Like they did all afternoon, Lyerly and Go traded shots and the UNCG sophomore sank a birdie putt on No. 18 to force the playoff. After both birdied the first playoff hole on the par-5, 514-yard No. 10, they replayed the same hole and Go secured the victory with a par after Lyerly’s second shot went right and landed in the water.

With the win, Go joins a prestigious group of 20 Buccaneer golfers to claim conference championship medalist honors, including the third in the last four years. Overall, ETSU has claimed a SoCon-best 15 individual titles, which broke the tie with Furman, while Tuesday’s was the 23rd overall individual conference championship win in school history.

For the tournament, Go totaled 43 pars, 12 birdies and one bogey, which came in Monday’s second round on the par par-4, 422-yard No. 11. From there, Go played the final 27 holes (including playoff) with seven birdies and 20 pars. Following the individual win, Go received an automatic bid to the NCAA Regionals, which will be held May 13-15. The selection show will be televised on Wednesday, May 1 at 9 p.m. on the Golf Channel.

“I am very happy with the win and was consistent with my play for all three rounds,” said Go, who recorded the lowest round in the field on Tuesday. “Myself and (Nick) Lyerly played really well today and we traded a lot of great shots all afternoon. He is a good golfer and I have a lot of respect for him. He put a lot of pressure on me, but I still had a lot of confidence going into the playoff because I birdied the hole all three days. Once he hit in the water on the second playoff, that gave me some extra confidence and was able to finish with a two-putt par for the win. This is a big win for me overall because it will give me confidence heading into regionals, where I will go and represent ETSU as best as I can.”

Head coach Fred Warren, who has now coached 19 of the Bucs’ 23 all-time conference champions, including all 15 in the SoCon was very proud of Go for claiming medalist honors.

“Shiso played a great tournament and had another wonderful round with the 66 today,” said Warren, who was coaching in his final SoCon Championship in which he has led the Bucs to a league-best 15 titles. “There were some tough pin placements today but Shiso played extremely well. Both he and (Nick) Lyerly traded high-quality shots all afternoon and played outstanding golf. Lyerly made it tough on Shiso by forcing the playoff, but Shiso stood tall, represented ETSU extremely well and brought home another championship.”

Go’s teammates were very proud of his play this week and enjoyed watching the playoff.

“It was fun to watch Shiso in the playoff and see him win it at the end,” said redshirt junior Trevor Hulbert (Orlando, Fla.), who also posted a top-five finish at the championship. “To see Shiso stand tall and come through with the win was a cool moment. It speaks a ton about his character to battle back and stay focused after the playoff was forced with (Nick Lyerly’s) birdie putt on No. 18. We are extremely proud of Shiso and excited to see what the future holds.”

As a team, the Bucs – who shot a 4-under 284 on Tuesday – finished runner-up at 1-over-par 865. ETSU started the day four shots back of UNCG and eventually pulled within a stroke early, but the Spartans opened a cushion after their four countable scores played holes No. 4-9 at eight-under-par. From there, the Bucs couldn’t rally back and the Spartans claimed their second straight title with a 12-shot win. UNCG posted a 12-under 276 on Tuesday to finish at 11-under-par 853 for the tournament.

Following the tournament, the all-conference awards were announced with Go and Rhea earning all-SoCon accolades.