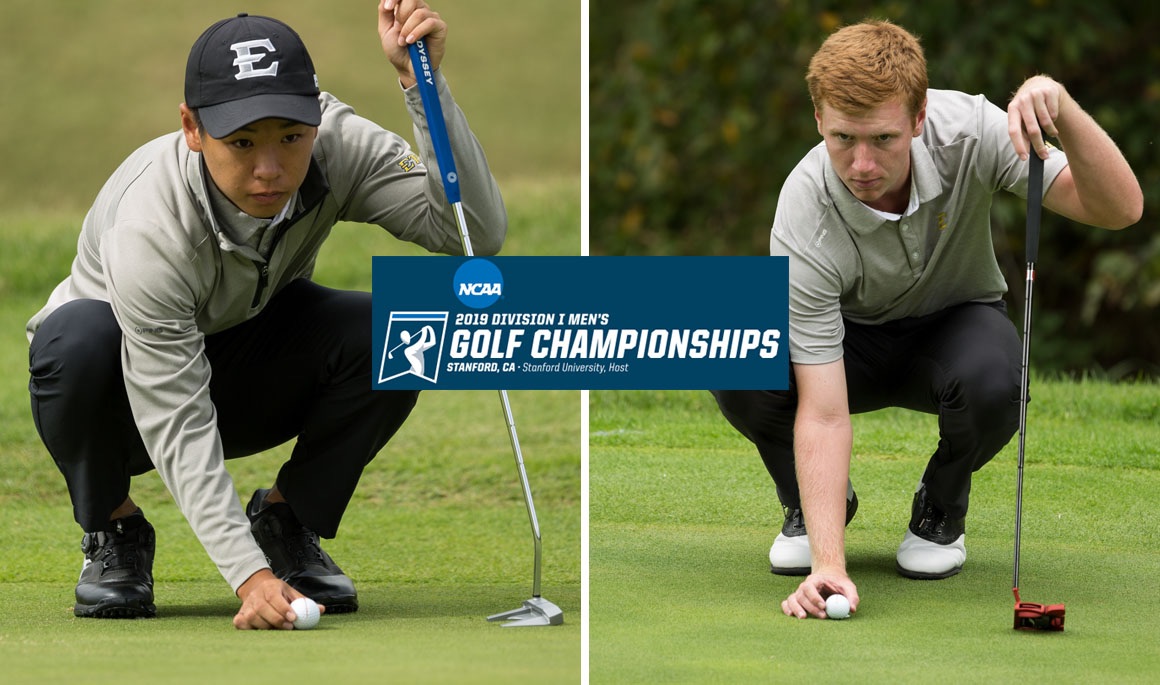 Sophomore duo begin play in Stanford Regional on Monday, May 13

JOHNSON CITY, Tenn. (May 1, 2019) -- A pair of Buccaneer sophomores earned a spot in the NCAA Regionals, as the selections were released late Wednesday night on the Golf Channel. ETSU’s Shiso Go (Kanagawa, Japan) and Jack Rhea (Jonesborough, Tenn.) will head west to represent the Blue and Gold in the Stanford Regional, which begins Monday, May 13 at the Stanford Golf Course in Stanford, California.

Go and Rhea were two of 45 individuals to earn a spot in the NCAA Regional, while a total of 81 teams also made up the six regional sites.

“I am very proud of Shiso and Jack to be able to represent our program in the NCAA Regional,” said head coach Fred Warren. “We knew that Shiso was automatically in after winning the SoCon, and to have Jack also make it as an-large, shows how consistent he has played all season. They are both very deserving of playing in the regional and we are looking forward to heading out west. They will face some good competition, but both Shiso and Jack have the game to make it through.”

Go secured the automatic bid after winning the Southern Conference title in a playoff over UNCG’s Nick Lyerly back on April 23 at Pinehurst No. 9. The Buccaneer sophomore went low in the final round at 6-under 66 to finish the tournament at 11-under-par 205. For the tournament, Go totaled 43 pars, 12 birdies and one bogey, which came in Monday’s second round on the par par-4, 422-yard No. 11. From there, Go played the final 27 holes (including playoff) with seven birdies and 20 pars.

“I am really excited to continue my season and be playing in the NCAA Regional,” said Go. “Winning the SoCon Championship was big for me overall because it will give me confidence heading into regionals. I am also excited that Jack made it. He has played well all season and it’ll be nice to have another familiar face playing with me. I am looking forward to representing ETSU as best as I can.”

Like Go, Rhea also earned all-conference honors after posting an identical stroke average of 71.82 in 11 tournaments this season. Rhea registered nine top-25 finishes this season and led the Bucs in three tournaments. This season, the Jonesborough, Tenn. native tallied 17 rounds of par or better and seven rounds in the 60s.

“I knew it was going to be close, and after I saw the Myrtle Beach Regional pass, I got a little nervous because I thought they would keep the individuals close to home. But when I saw the Stanford Regional pop up and my name was listed next to Shiso’s, it was a feeling of relief and excitement,” said Rhea. “It’ll be fun to be playing with Shiso. We will both be playing loose and trying to make birdies.”

Either Go or Rhea will look to become the first Buccaneer golfer to reach the NCAA Championship since Gudmundur Kristjansson (Reykjavik, Iceland) represented the Blue and Gold in 2015. For one of the two Buccaneers to advance out of the regional and reach the championship, they need to either win the regional or be the top individual golfer from a non-qualifying team (top five teams advance).

NCAA team and individual medalist titles will be decided May 24-29 at Blessings Golf Club in Fayetteville, Arkansas.

Live scoring of all three rounds of the regional will be available via Golfstat. Recaps from each round will be provided on ETSUBucs.com, while Twitter updates will also be available by following @ETSU_MGolf.