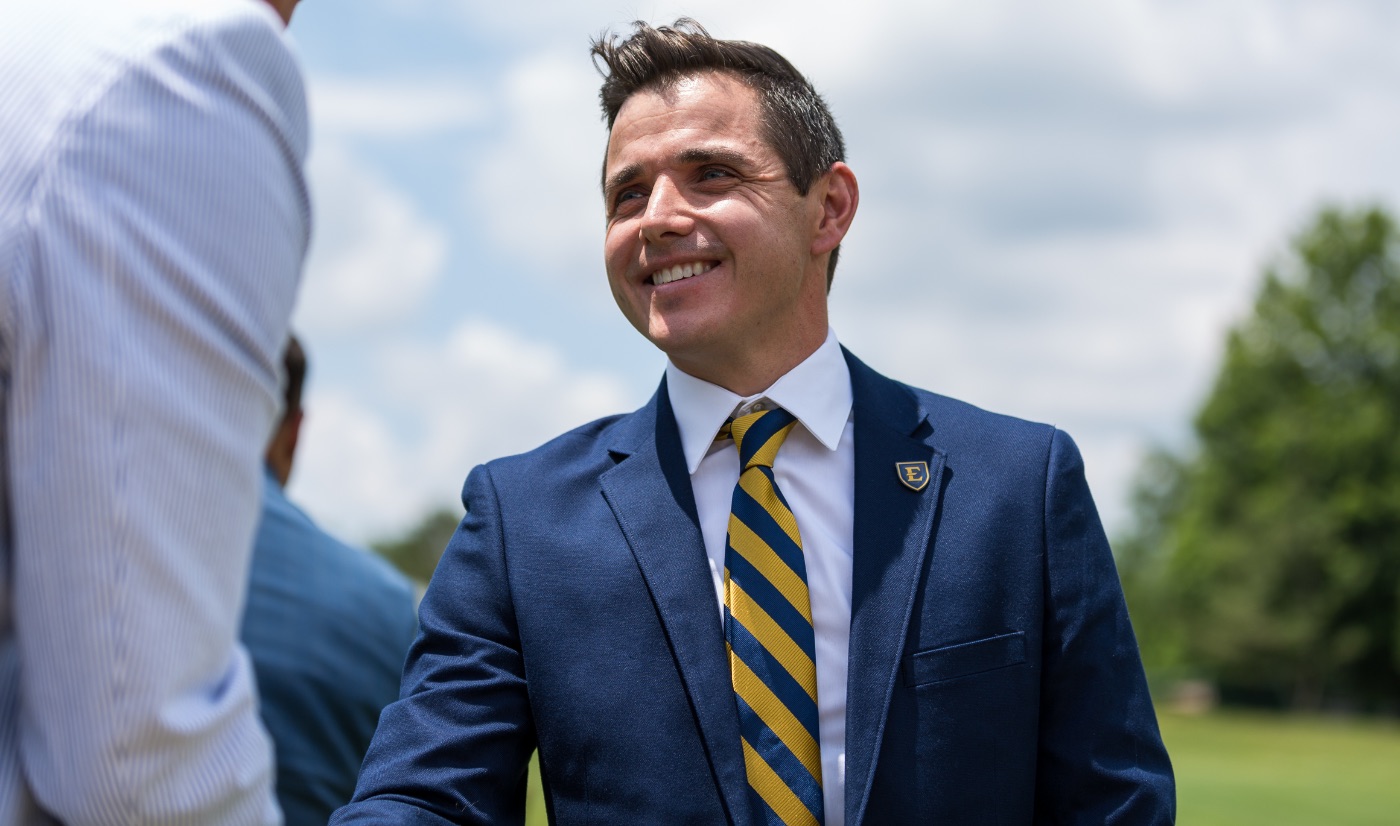 Amos, who spent the 2018-19 season as the Buccaneers’ associate head coach, becomes the third head coach of the tradition-rich program. Amos will officially take over as head coach on July 1, 2019 following the retirement of Hall of Fame head coach Fred Warren.

“I want to thank Scott Carter for giving me this opportunity to lead the East Tennessee State men’s golf team,” said Amos. “I am extremely honored and proud to be only the third head coach in the history of the program. The history and achievements of this program are truly incredible and that is a credit to the coaches that have come before me. Coach Warren has left this program in a position where it can continue to be successful and I want to thank him for that. We have some of the best facilities in the country with incredible golf courses around the area. When you combine that with a community that cares about golf, it’s a great place to play college golf.”

Carter is excited to announce Amos as the new head coach of ETSU men’s golf.

“The future has never been brighter for our ETSU men’s golf program, and I am excited to announce Jake Amos as the head coach of Buccaneer men’s golf,” said Carter. “I could not be more proud and thankful for the way Coach Fred Warren and Coach Amos have worked together during this year of leadership transition. I, along with every Buccaneer, offer tremendous gratitude to Fred Warren for his dedication and loyal leadership in building our nationally competitive and respected men’s golf program over the past 33-years.

“Coach Jake Amos was a national champion collegiate golfer and has proven himself to be one of the brightest coaching stars in all of the NCAA.  Jake brings tremendous energy to our program as an unwavering competitor, dynamic communicator and tireless recruiter.  ETSU is very fortunate to have him as our head coach, and we are honored to welcome him, his wife Dani and son Jenson into this new role.”

ETSU President Dr. Brian Noland pleased to have Coach Amos make ETSU his home and build on the tradition-rich program.

“Coach Amos will build upon the legacy of Coach Fred Warren who positioned our men’s golf program as a national competitor and brought international recognition to ETSU,” said Dr. Noland.  “Prior to joining the Bucs, Coach Amos already had earned distinction for his leadership as an assistant coach, and we are grateful that he has chosen ETSU and this region as his home.”

This past season, Amos helped the Bucs capture their first-ever win at the Bank of Tennessee Intercollegiate, along with posting two runner-up finishes. Individually, ETSU sent Jack Rhea (Jonesborough, Tenn.) and Shiso Go (Kanagawa, Japan) to the NCAA Regional, including both Buccaneer standouts earning all-Southern Conference honors. Go joined a prestigious group of 20 Buccaneer golfers to claim conference championship medalist honors, while ETSU captured its SoCon-best 15th individual title. Rhea is also coming off a spectacular sophomore season in which he posted nine top-25 finishes and led the Blue and Gold with a 71.78 stroke average.

During his time at South Carolina, the Gamecocks made back-to-back NCAA Regional appearances, while totaling 13 top-five finishes, including wins at the 2017 Camden Collegiate Invitational and Hootie at Bulls Bay Intercollegiate and was named a finalist for the Jan Strickland award in 2018. The Gamecocks also posted runner-up finishes at the 2017 Ka’anapali Collegiate Classic in Hawaii and 2016 Camden Collegiate Classic. This past season, South Carolina just missed advancing to its fourth NCAA Championship in the last five years, while posting its fourth-lowest scoring average in program history at 286.97. In 2016-17, the Gamecocks advanced to the first ever SEC Match Play after placing fifth in the stroke play format at the SEC Championships. Amos helped coach Keenan Huskey to Golfweek All-American honors, while he and Scott Stevens were named second team All-SEC and selected to the PING All-Southeast Region team in 2016-17. Huskey finished his illustrious Gamecock career second on the career scoring average list (71.66) and tied for sixth all-time with 16 career top-10s. This past season as a junior, Stevens led the team with a 71.44 scoring average, two top-five finishes, and seven top-20s, which included runner-up medalist honors and a tied for 11th showing at the NCAA Regional. Stevens currently ranks third on the Gamecock career scoring average list (71.98).

During the 2013-14 season at South Florida, Amos led the Bulls to the NCAA Regionals, while the team finished the year ranked No. 33 in the country. Amos helped coach Chase Koepka – brother of four-time major winner Brooks Koepka – to PING All-American honors, the first USF player to earn the accolade since 1989.

A native of Leicester, England, Amos represented his native country internationally at both the under-16 and under-18 levels. His wife, Dani, is a native of Barnwell, S.C., and the couple have a son Jenson King and are expecting their second child this September.