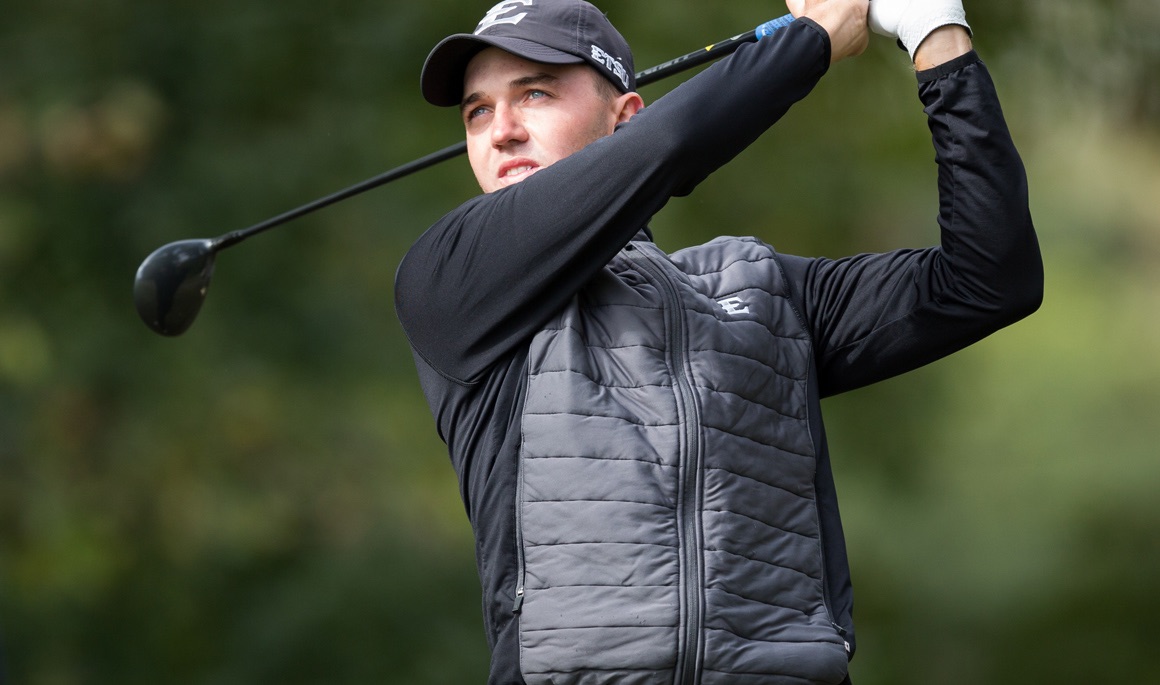 ROCKY FACE, Ga. (Sept. 7, 2019) – For the second consecutive round, reigning Southern Conference individual champion Shiso Go (Kanagawa, Japan) led the ETSU men’s golf team in the Carpet Capital Collegiate. Four of the five golfers in today’s action showed an improvement in their scores. The Buccaneers made the biggest leap up the leaderboard, jumping three spots after tallying the best improvement from round one to round two, a difference of 11 strokes (302 – 291).Go carded a 2-under-par round of 70, fueled by a pair of birdies in the opening three holes. The only blemish on the opening nine for the Japan native was a lone bogey on hole five, making the turn at 1-under par (35). Go carried his momentum into the back nine, firing another 1-under-par nine with two more birdies and one bogey. Following his (-2) round, Go jumped from T14 to T4, a 10-spot swing. Go is one of only 10 golfers in the field in red figures.

The second-best round for the Bucs came from freshman Archie Davies (Carlisle, England). After a 6-over-par opening round, the highly touted freshman settled in to card a 1-over-par 73. Davies concluded the front nine at 2-over-par 37, before recording a 1-under-par back nine, his first nine holes under par in his collegiate career. Davies was even par for the back nine until the final three holes when he posted a birdie, bogey and birdie to conclude his overall round with a 73.

The final two scores for the Bucs came from senior Trevor Hulbert (Orlando, Fla.) and newcomer Samuel Espinosa (Pedrena, Spain), both posting a round of 2-over-par 74. Espinosa was first to finish his round for ETSU and jumped off to a hot start with three consecutive birdies in the opening six holes. However, a triple bogey on the seventh hole halted the momentum of the Spain native. Espinosa finished 2-over-par on the closing nine holes with a birdie and three bogeys, jumping 15 spots up the leaderboard to T-62 with a 12-over-par score. Hulbert rebounded from an opening round 78 to card a second round 74 (+2). The Florida native was 3-under-par in the opening six holes before three consecutive bogeys pulled his score to even-par at the turn. Much like Espinosa, Hulbert birdied the 10th hole but finished 3-over-par in the final eight holes to finish 2-over-par for the second round. Hulbert jumped 14 spots up the leaderboard with his second-round turnaround, currently sitting in a tie for 42nd at 8-over-par.

Georgia Tech’s Luke Schniederjans has put some distance between himself and the pack, leading the field at 9-under-par following a 67 (-5) in round two. Charlotte’s Marc Boucher and Georgia Tech’s Tyler Strafaci are tied for second at 2-under-par. Schniederjans carded eight birdies and five bogeys in his round, pushing his birdie total to 14 birdies and one eagle in 36 holes.

Led by Schniderjans, Georgia Tech (-7) has pulled away from the pack, holding a 12-stroke lead over North Florida (+5). Alabama rounds out the top three, sitting at 9-over-par and 16 shots behind the Yellow Jackets.

ETSU is currently tied with Charlotte and Colorado State at +17, picking up a four-shot difference against the Rams and a two-shot differential with the 49ers. The Bucs are five strokes ahead of Tennessee, and 10 shots ahead of Florida. ETSU also holds a 20-stroke lead over fellow SoCon foe Chattanooga (+37).

The Bucs will be the first group off the tee at 8 a.m. on Sunday morning in the final round of the 2019 Carpet Capital Collegiate. ETSU will be paired with Charlotte and Colorado State and will tee off on the first hole for the first time in the tournament.

Fans can follow live scoring of the tournament provided via Golfstat.