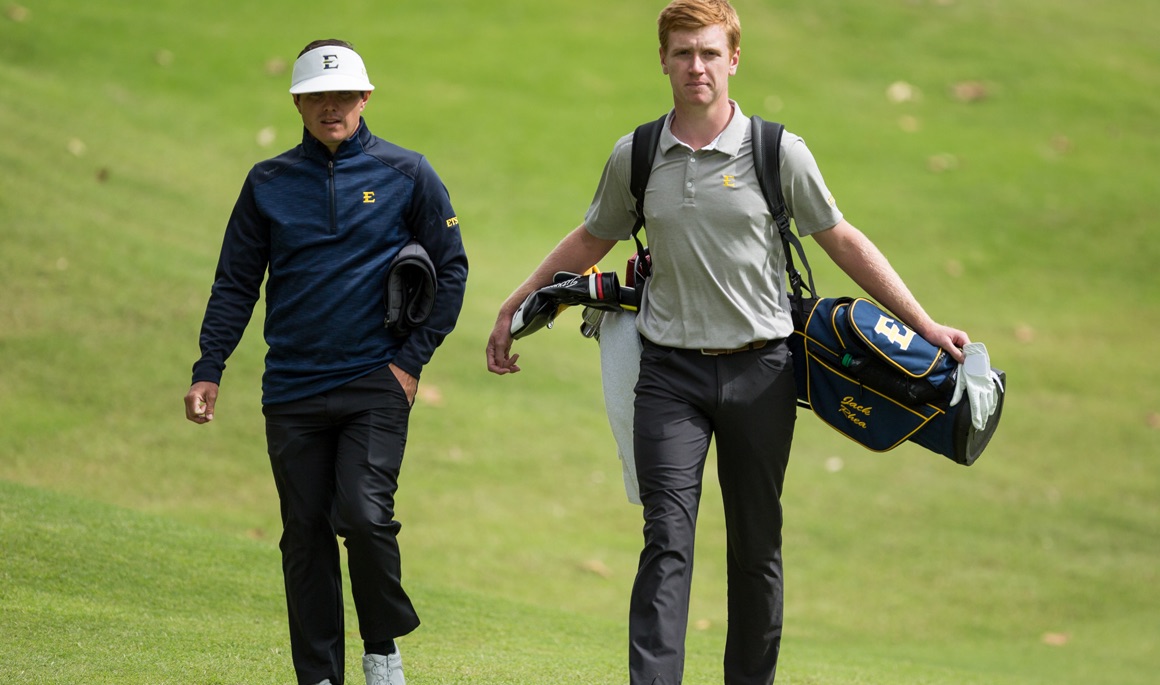 ROCKY FACE, Ga. (Sept. 8, 2019) – The ETSU Buccaneers saw their first tournament of the 2019-20 season come to an end on Sunday afternoon in Rocky Face, Ga. Competing in the Carpet Capital Collegiate for the first time since 2010, the Bucs did not disappoint in the opening tournament, placing T-2 with Charlotte and North Florida with a score of 17-over-par 881. ETSU only trailed host Georgia Tech, finishing with a score of 3-under-par 861. ETSU was one of only four teams to improve each round from carding a 302 (+14), 291 (+3) and a 288 (E) to make the biggest jump up the leaderboard for the second consecutive day, catapulting from 7th to 2nd.

“Really happy with how we started the season, to finish T-2 in a field like that straight out of the gate is incredible considering we haven’t seen that course before and we have such a young team,” state Head Coach Jake Amos. “Happy with the response after day one when we didn’t play that well. The guys had a quick learning curve and were disciplined and coachable with how they handled things. I think Archie had a couple of really solid rounds but Jack and Shiso did what we needed them to do and they led the team throughout the whole weekend. I really want to thank Coach Mike Hulbert for preparing the team in the practice round while I was tending to the birth of Jasper. You could really tell the guys had a good practice round and I want to credit Coach Hulbert for coaching them.”

Jack Rhea (Jonesborough, Tenn.) posted a final-round 3-under-par (69), the lowest round for the Bucs throughout the tournament. Rhea’s efforts allowed him to leap inside the Top 10, jumping 15 spots in a tie for 9th place. Joining Rhea inside the Top 10 is teammate Shiso Go (Kanagawa, Japan), carding a final-round 2-over-par 74, good enough to join Rhea in a tie for 9th. This is the fifth Top-10 finish for Go in his career and fourth for Rhea, while also marking the second time that the duo finished inside the Top 10 together, doing so in the Southern Conference Championship in 2018 when Rhea finished T-6 and Go placed T-7.

Rhea got his round started with a birdie on hole 3, followed by a bogey on 4 to fall back to even-par for the day. However, the Tennessee native was not fazed by the mishap on hole 4, bouncing back with back-to-back birdies on holes 6 and 7, making the turn at 2-under-par.  The junior then carried his momentum into the back nine, rolling in birdies on holes 12 and 15 to improve to -4 in his final round. However, Rhea’s bogey on 18 concluded his tournament with a final round 3-under-par, finishing the weekend at 1-over-par (217).

The second-best closing round for the Blue & Gold came from Trevor Hulbert (Orlando, Fla.), finishing Sunday at even-par, turning in an 8-over-par weekend to finish in a tie for 31st. After consecutive bogeys on holes 2 and 3, Hulbert rebounded with two birdies on 6 and 7 to pull back to even par. Fresh off the turn, the Florida native rolled in his third birdie in five holes, this time doing so on the 10th hole to improve to 1-under-par. Despite giving two strokes back to the course on holes 14 and 17, Hulbert concluded his round on a high note with another birdie on 18, maintaining his even-par round of 72.

Archie Davies (Carlisle, England) was active on the front nine with two birdies, three pars and four bogeys as he made the turn at +2 (38). The freshman concluded his first collegiate tournament with a strong back-nine performance, settling down to record eight pars and one birdie for a -1 (35). Davies finished the day at 1-over-par, joining Hulbert in a tie for 31st for the weekend at +8.

Go’s final round was the conclusion of the tournament for the Bucs as the Japan native finished Sunday with a 2-over-par (74), capping his weekend at 1-over-par for a ninth-place finish. The front nine did not start the way Go intended, with five bogeys in a matter of six holes as he turned at +5 (41). However, the veteran settled in for a bogey-free back nine where he registered three birdies to pull back inside the Top 10 and boosting the Bucs to a second-place finish.

Georgia Tech’s Luke Schniederjans claimed the individual title in the opening weekend after posting a 9-under-par (207) tournament. Schniederjans finished even par in the closing round with four birdies and four bogeys. The Yellow Jacket star finished ahead of fellow teammate Tyler Strafaci (-4) and Clemson’s Kyle Cottam (-2). Only six players in the field finished below par.

The Yellow Jackets were the only team below par, claiming the Carpet Capital Collegiate with a score of 3-under-par 861, 20 strokes ahead of ETSU, North Florida and Charlotte. Georgia Tech claimed the event despite shooting its worst round of the tournament on Sunday, 4-over-par 292.

The Bucs will be back in action on Monday, Sept. 16 – Tuesday, Sept. 17 when they travel to Lake Forest, Ill. to compete in the Windon Memorial Classic hosted by Northwestern.